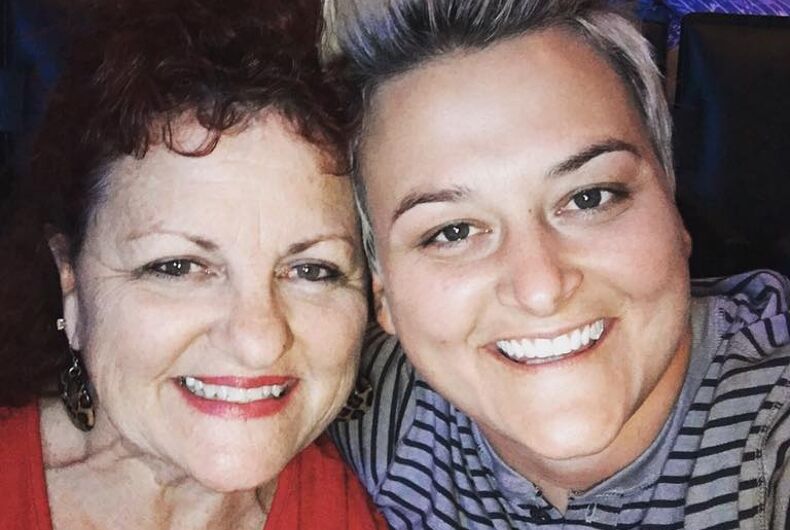 A lesbian woman says she was questioned by staff at L.A.’s Staples Center Wednesday after they mistook her for a man in the women’s restroom, PinkNews reports.

Mary Looper was attending a Carrie Underwood concert with her aunt when a female security officer stood outside her restroom stall, demanding proof of her gender. Looper, who is tall with close-cropped hair, took to Facebook to call out the venue.

“They literally just tried to escort me out of the women’s restroom at the [Staples Center],” she wrote that evening. “Shame on them.”

Loopers friends expressed shock that something like this could happen in Los Angeles. Some event wrote “reviews” of the Staples Center, expressing their distaste for the venue’s actions, and vowing never to return.

“I’m shocked. A tall woman with short hair, no make up, and BOOBS and your security guards followed her into the women’s bathroom and WAITED outside her stall for her to finish to ESCORT HER OUT?” Connie Tyler wrote. “Does every woman have to fit into your standards of what a WOMAN should look like in order to use public facilities and have some PRIVACY, without feeling humiliated, intimidated and demeaned in front of thousands of other people?”

Looper said it’s not the first time someone has thought she was a man, but it’s never become such an issue before.

“I get mistaken for a man all the time… It’s no secret. But, for the fact that their woman employee waited outside my stall for proof that I was a woman, didn’t believe me off my voice… That’s what hurt and had me shocked,” she wrote in a comment. “I didn’t wanna stir anything up but never ever thought I’d be treated like that in a woman’s restroom in LA, in the Staples Center. Just a bummer it went that far.”

The Staples Center has not responded to any of the comments about the incident on its Facebook page.