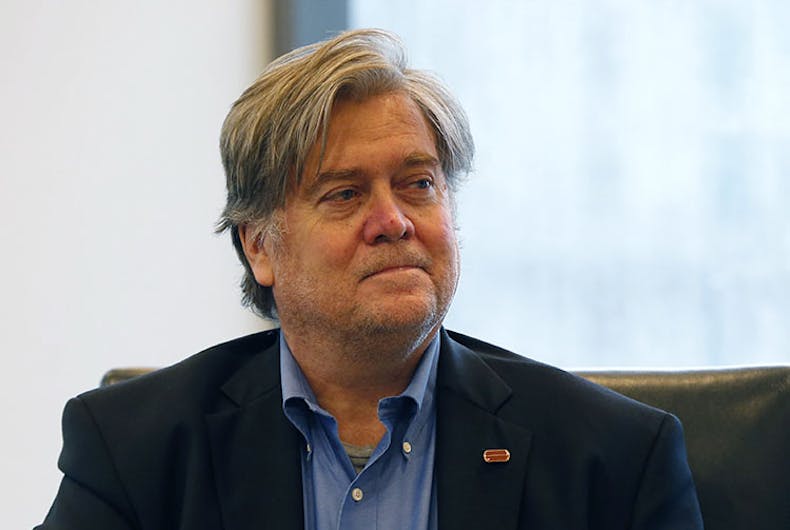 We’re learning more about Stephen Bannon, the Chief Executive Officer of Donald Trump’s campaign for president, and none of it is good — nor surprising.

On the heels of reports that the Breitbart cofounder had been dragged into court to defend accusations from his ex-wife of anti-Semitism and domestic violence, comes another troubling revelation: Bannon used an antigay slur to bash progressive women during a radio interview, calling them “a bunch of dykes that came from the seven sisters schools,” according to BuzzFeed.

The interview with Political Vindication Radio was recorded in 2011, and served to promote Bannon’s documentary film, Fire From the Heartland: the Awakening of the Conservative Woman. Bannon was explaining why progressive women vilify conservative women like former vice presidential candidate Sarah Palin, conservative author Ann Coulter, and former Minnesota congresswoman Michele Bachmann. “And so these women cut to the heart of the progressive narrative,” Bannon said, adding that they pose an “existential threat to the progressive narrative,” which he said is all about victimhood.

“That’s why there are some unintended consequences of the women’s liberation movement. That, in fact, the women that would lead this country would be pro-family, they would have husbands, they would love their children. They wouldn’t be a bunch of dykes that came from the Seven Sisters schools up in New England. That drives the left insane and that’s why they hate these women.”

Charges of domestic violence against Bannon were dropped when his ex-wife, who filed the charges, failed to show up in court, reported Politico.

Listen to the recording of Bannon’s interview with Political Vindication Radio about progressive women, below.