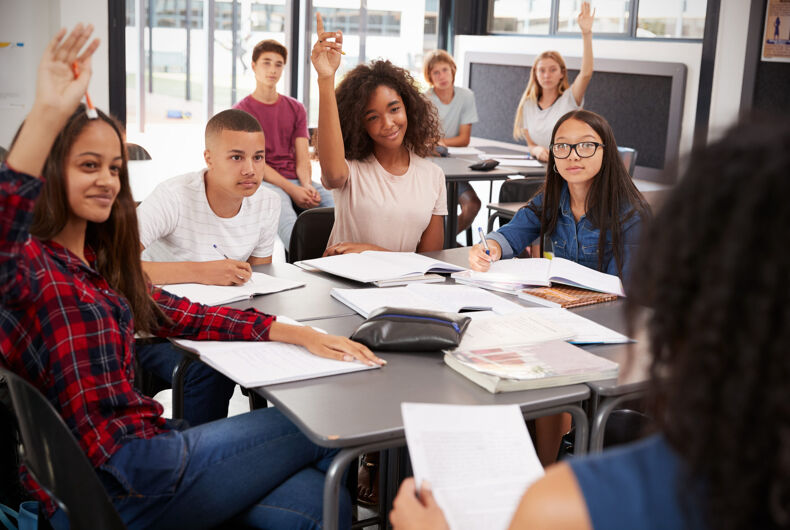 Texas Republicans have introduced two bills that would ban instruction of sexual orientation and gender identity in the state’s public schools.

Among the 35 anti-LGBTQ+ bills filed so far by Texas Republicans for the 2023 legislative session are two that closely mirror Florida’s “Parental Rights in Education” law, popularly known as “Don’t Say Gay.”

H.B. 631, authored by state Rep. Steve Toth (R) would ban schools from teaching about sexual orientation or gender identity from kindergarten through fifth grade, while Rep. Jared Patterson’s (R) H.B. 1155 extends the ban through eighth grade. Both bills ban instruction on sexuality and gender identity that is “not age appropriate or developmentally appropriate” at any grade level. Neither bill specifies how to define what is appropriate for various age groups, according to the Texas Tribune.

In a January 3 statement announcing H.B. 1155, Patterson characterized the bill as an “improved” version of Florida’s law, and used both the now familiar language of “parental rights” and misleading rhetoric about “sexualizing” children.

“The sexualization of our children must stop,” Patterson said. “Parents and taxpayers have spoken loudly over the past year-plus. The message is no more radical ideology in the classroom—particularly when it comes to inappropriate or obscene content.”

“Given what we’ve uncovered, this bill is needed to provide parents with the maximum transparency and control over health-related services in our schools,” he continued.

Parents and taxpayers have spoken loudly over the past year-plus. The message is no more radical ideology in the classroom — particularly when it comes to inappropriate or obscene content. The sexualization of our children must stop. pic.twitter.com/090LQEkmA7

But critics say these bills could have far-reaching effects for LGBTQ+ students, teachers, and school districts.

“The reality is that everybody has a gender identity and sexual orientation; avoiding those conversations is incredibly difficult,” Adri Pérez, an organizing director with Texas Freedom Network, said. “What it becomes is a tool to be leveraged specifically against LGBTQIA+ people, because what stands out is not the people who fit in but the people who are being specifically targeted and attacked as being different.”

As the Texas Tribune notes, both bills require school districts to notify parents of changes to how campus officials provide services to or monitor a “student’s mental, emotional, or physical health or well-being.” Ricardo Martinez, CEO of Equality Texas, says that could result in students being outed to their parents.

Patty Quinzi, the director of public affairs and legislative counsel for the Texas American Federation of Teachers, wonders about the impact the proposed laws would have on LGBTQ+ teachers.

“Does this mean that someone can’t put up a picture of their family?” Quinzi said. “What kind of fear is this going to instill in teachers and being allowed to be themselves?”

“It’s so important for children to see themselves in their teachers,” she added.

Perez also warns that the vague language in the bills could create a legal gray area “wherein a teacher could be criminalized or attacked or removed from their job that they love.”

“When a law is vague, it allows for discriminatory and targeted enforcement. And it also creates a very hostile and chilling atmosphere where people… go out of their way to self-censor,” said Chloe Kempf, an attorney with the American Civil Liberties Union of Texas.

“[Schools] might not even know what to tell teachers and staff how to actually protect themselves and protect the school district,” said Brian Klosterboer, also of the Texas ACLU.

Klosterboer said that both bills will likely face legal challenges should Texas Gov. Greg Abbott (R) sign them into law.