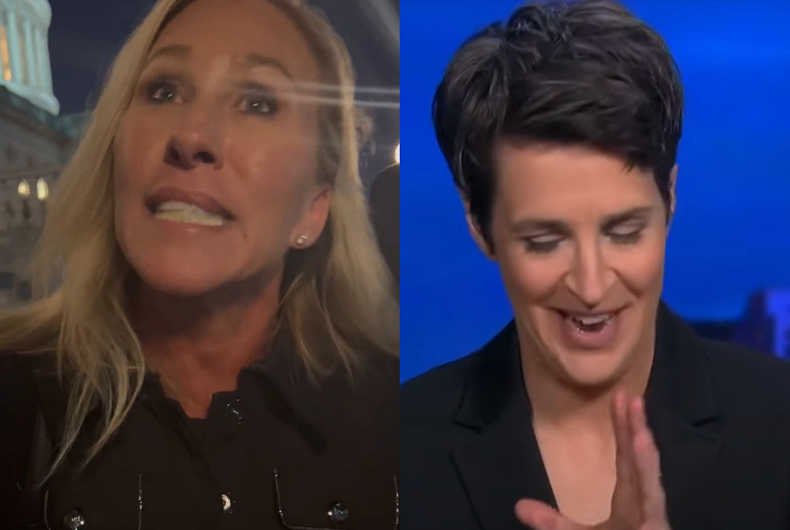 Out MSNBC host Rachel Maddow mocked conservatives for thinking they could finally exonerate Donald Trump for allegedly taking and keeping classified documents at his home because of a recent story about President Joe Biden that’s not quite exactly the same thing.

CBS reported yesterday that about 10 classified documents were found in Biden’s office at the Penn Biden Center for Diplomacy and Global Engagement in D.C. The documents probably got there during Biden’s tenure as vice president. Biden’s personal attorneys identified the materials before the midterm elections and worked with the National Archives to return them the next day.

It’s not much of a story, but to listen to the right one would think that Biden was selling state secrets to Boris and Natasha.

“For Joe Biden to steal documents and have possession of them, this is a serious investigation and the communists at NARA [National Archives and Records Administration] can’t hide it anymore and [Attorney General] Merrick Garland and the Department of Justice, they have to be held accountable if they don’t treat Joe Biden exactly the same way they’re treating President Trump. It’s ridiculous and it’s shameful.”

Maddow explained, “Briefly tonight, is that it immediately created a perceived ‘what-aboutism’ defense for President Trump. President Trump is under federal criminal investigation for apparently deliberately hoarding hundreds of classified documents at his home in Florida, including, refusing to hand them over after National Archives told them he had to,  even after they subpoenaed him to get those documents. There was some brief excitement on the right tonight, that they thought they had a new defense.”

“Oh, it’s supposedly so bad what Trump did at Mar-a-Lago,” she continued, “with all the nuclear documents and stuff, but look, Joe Biden’s just as bad, why aren’t they serving search warrants on President Biden the way they did on former President Trump?”

“The reason it was only a brief flurry of excitement is because, in President Biden’s case, he and his lawyers appear to have actually done the right thing when it comes to these classified documents. Biden’s lawyers say they discovered these documents among his vice presidential papers at his office at the Penn Biden Center on November 2nd. The White House Counsel’s Office then notified the National Archives that same day about what had been found. The National Archives, apparently, did not even know these documents were missing and had not been seeking their return. The Archives took custody of that material the following morning. And… that appears to be it.”

“This was not, as in Trump’s case, the Archives desperately seeking the return of materials that Trump was blowing off.”

.@RepMTG on Biden having classified documents at his office:

"Merrick Garland and the Department of Justice, they have to be held accountable if they don't treat Joe Biden exactly the same way they're treating President Trump." pic.twitter.com/t8p4G5BBK5

Joe Biden took classified documents from the White House when he was Vice President.

The VP does NOT have the power to declassify, only POTUS.

This is a very serious crime.

DOJ & NARA can’t sweep this under the rug AND persecute Trump.

Judge who allegedly used gay slurs retires from the bench