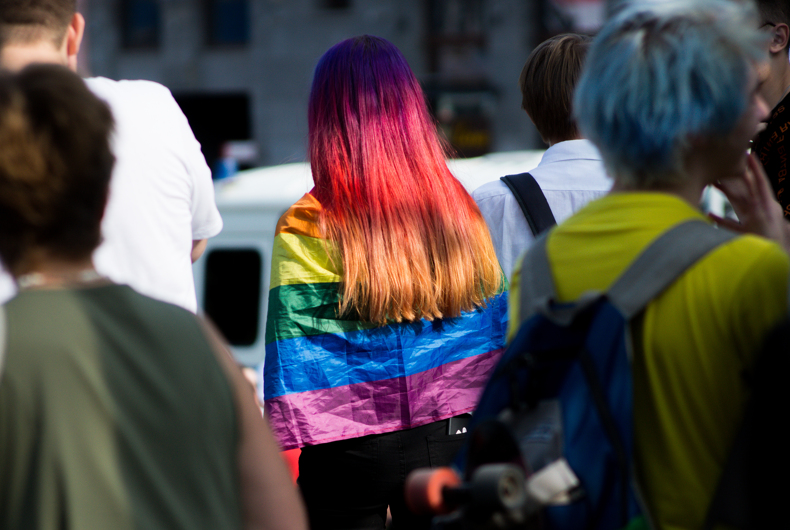 After the Russian government forced it to shut down last year, the largest LGBTQ+ organization in the country officially returned on January 1 – and it’s ready to challenge Putin’s latest crackdown on LGBTQ+ people.

The Sphere Foundation, which operates the Russian LGBT Network, has been reestablished (though it remains unlicensed) after the Russian government sued and accused the organization of acting under “foreign influence,” according to the Daily Beast.

The group has reportedly brought back all of its programs and initiatives and is prepared to provide total support to LGBTQ+ Russians.

“We were the ones who supported the LGBT+ movement across Russia for over 11 years,” said the head of the organization, Dilya Gafurova, “and some members of our team had been public, doing advocacy and awareness-raising work, and therefore were running high personal risks. But very few did leave, our core team is preserving itself.”

The Sphere Foundation has a lot to stand up against. In December, President Vladimir Putin signed a law expanding the already-existing prohibition on LGBTQ+ “propaganda.”

The newly signed law effectively outlaws any public expression of LGBTQ+ life in Russia by banning “any action or the spreading of any information that is considered an attempt to promote homosexuality in public, online, or in films, books or advertising,” Reuters reported.

Putin first signed a law banning so-called “gay propaganda” in Russia in June 2013. The law ostensibly sought to “protect children” from any “propaganda of nontraditional sexual relationships,” as stated in the law’s text. The new law extends the restrictions to not just children but Russians of all ages.

Putin signed the law as part of a broader push for Russians to embrace the nation’s “traditional values.” The push has been used as a justification for Russia’s invasion of Ukraine and Russia’s stance against the western multinational defense coalition NATO which seeks to limit Russia’s military expansion in Europe.

The law has mostly been used to silence LGBTQ+ activist organizations, events, websites, and media, as well as to break up families and harass teachers. It has also been roundly condemned by the United Nations Committee on the Rights of the Child, the human rights groups Amnesty International and Human Rights Watch, as well as civil rights activists around the world.

These critics say the updated law will further endanger the lives of Russia’s LGBTQ+ population, which has already suffered increased harassment, violence, and hostility in recent years.

Gafurova says the new law is “a part of an ideological confrontation with the West. Being LGBT+, in the eyes of Russian MPs, is the result of harmful Western influence, a ‘hybrid war,’ as they call it.”

The Sphere Foundation led the charge against the original propaganda law and is prepared to keep fighting.

“…the wording is so vague, the government may use it as it pleases them if they’re willing to target one’s activity, Gafurova said. “What is ‘LGBT propaganda’ anyways? They have this set of bills that now touches upon so many spheres, like media, book publishing, streaming platforms, stores and e-commerce, and yet ‘propaganda’ isn’t even clearly defined.”

“We want to continue encouraging people to voice their discontent over this, to make it known that the queer community in Russia cannot be muzzled—and that the way the government perceives LGBT+ people and the way that the actual Russian society does are very different.”

At the same time, Gafurova is worried that the organization, itself, could be considered “propaganda” under the vague law, which makes publicly reaching out to LGBTQ+ people on social media a challenge. She did say that providing legal and psychological help to LGBTQ+ people is not prohibited under the new law.

But Gafurova is not prepared to fold on anything and emphasized that the organization is ready to take on the Russian government.