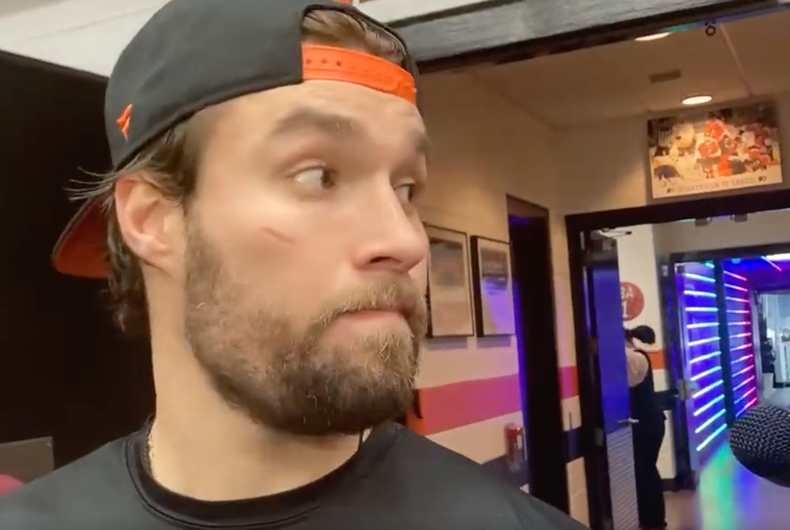 The 26-year-old defenseman for the Philadelphia Flyers cited his religious beliefs. Provorov is a member of the Russian Orthodox Church.

“I respect everybody’s choices,” Provorov told reporters after the game. “My choice is to stay true to myself and my religion. That’s all I’m going to say.”

#Flyers Ivan Provorov on his Pride Night pregame boycott :
“My choice is to stay true to myself and my religion.” pic.twitter.com/YSFKvkyEJC

“With Provy, he’s being true to himself and to his religion,” said Torotorella. “That’s one thing I respect with Provy. He’s always true to himself.”

Asked if he considered benching Provorov for not participating in the warm-up, Torotorella replied, “No.”

The Pride Night warm-up was an LGBTQ+ charity event, with players’ jerseys to be sold at auction to raise money for LGBTQ+ causes.

Of course, Ivan Provorov is more than happy to play pregame dress-up when it does align with his belief system. pic.twitter.com/rOG0uoCsf4

According to Charlie O’Connor at the Athletic, at previous Flyers Pride Nights, warm-ups featured rainbow stick tape but not Pride jerseys, and the tape was optional. Provorov declined to wrap his stick but played anyway.

The Flyers released a statement following the game: “The Philadelphia Flyers organization is committed to inclusivity and is proud to support the LGBTQ+ community. Many of our players are active in their support of local LGBTQ+ organizations, and we were proud to host our annual Pride Night again this year. The Flyers will continue to be strong advocates for inclusivity and the LGBTQ+ community.”

Provorov moved to the U.S. at 13 to cultivate a hockey career, landing in Wilkes-Barre, Pennsylvania with the junior Wilkes-Barre/Scranton Knights. The Flyers selected Provorov seventh overall in the 2015 NHL Entry Draft.

Provorov is a three-time recipient of the Barry Ashbee Trophy for the best Flyers defenseman — the youngest recipient in franchise history — and holds the second-longest team record for most consecutive games played, having not missed a game between 2016 and 2022.

On Wednesday morning, the National Hockey League weighed in with an explanation of their Hockey is for Everyone initiative — the impetus for Tuesday night’s Pride Night warm-up — without addressing Provorov’s decision directly.

“Hockey is for Everyone is the umbrella initiative under which the League encourages Clubs to celebrate the diversity that exists in their respective markets, and to work to achieve more welcoming and inclusive environments for all fans. Clubs decide whom to celebrate, when and how — with League counsel and support. Players are free to decide which initiatives to support, and we encourage their voices and perspectives on social and cultural issues.”

Dutch constitution will be amended to ban LGBTQ+ discrimination