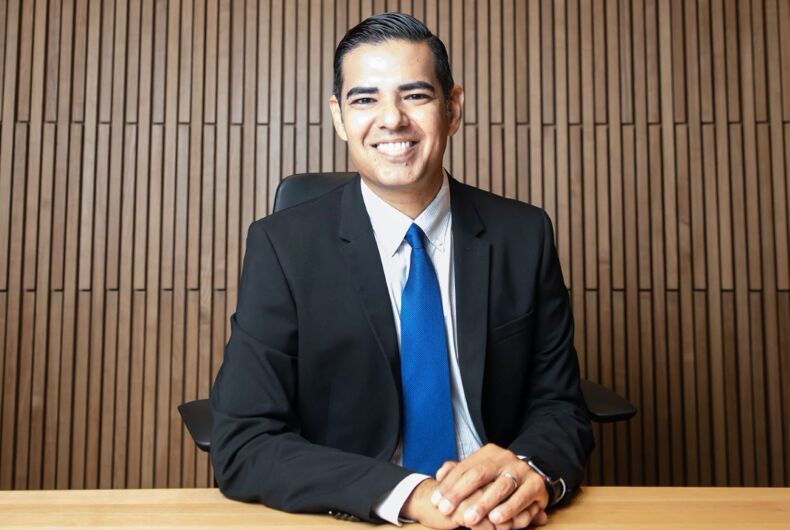 Out Representative-elect Robert Garcia (D-CA) may not have been able to get sworn in yesterday due to Republicans’ inability to elect a speaker of the House, but he has plans for when he finally can be sworn in.

When he takes his oath of office, he’ll swear on a copy of the Constitution, and, beneath that, an original Superman #1 comic from 1939, a photo of his parents, and a copy of his citizenship certificate.

Will be proudly sworn-in to Congress on the U.S. Constitution. Underneath the Constitution will be 3 items that mean a lot to me personally. A photo of my parents who I lost to covid, my citizenship certificate & an original Superman #1 from the @librarycongress. 🇺🇸😊 pic.twitter.com/YGW43OLsIp

Garcia came to the U.S. from Peru with his family when he was five-years-old and has said that naturalization was “his proudest moment” and the reason he started a career in politics. His parents died in 2020 of COVID-19.

He was the youngest and first out LGBTQ+ person elected as mayor of Long Beach, California (a position he served in from 2014 to 2022). During his time as mayor, he worked with businesses to reduce their environmental impacts, filled vacancies on citizen commissions with diverse and female members, and worked to improve local infrastructure as well as financial opportunities for local artists and home-based business owners.

In November, he tweeted a photo of the Superman #1 comic along with Amazing Fantasy #15, in which Spider-Man first appeared, saying he didn’t know which one he would first check out from the Library of Congress.

I’m going to have a hard time deciding which one to check out first. 🤔 pic.twitter.com/j0X40U40Lk

While many members of Congress will be sworn in on Bibles, they are not legally required to do so. Former Rep. – and current Minnesota attorney general – Keith Ellison (D-MN), who was the first Muslim person elected to Congress in 2007, was sworn in on a copy of the Quran owned by Thomas Jefferson.

Theodore Roosevelt wasn’t sworn in with any object after the assassination of William McKinley in 1901. And in 2014 Suzi LeVine was sworn in as U.S. ambassador to Switzerland and Liechtenstein on a Kindle with a copy of the Constitution open.

“I wanted to use a copy that is from the twenty-first century and that reflects my passion for technology and my hope for the future,” she said at the time.

New members of the House can’t be sworn in until a speaker is elected. Yesterday, after three votes, no candidate for speaker was able to get a majority of votes because of a faction of Republicans voting against Rep. Kevin McCarthy (R-CA). The Democrats’ candidate – Rep. Hakeem Jeffries (D-NY) – got the most votes in each round of voting, and around 20 Republicans – including anti-LGBTQ+ Reps. Paul Gosar (R-AZ), Lauren Boebert (R-CO), Bob Good (R-VA), and Matt Gaetz (R-FL) – voted for Rep. Jim Jordan (R-OH).

Jordan himself nominated and voted for McCarthy.

The House adjourned without a new speaker elected.