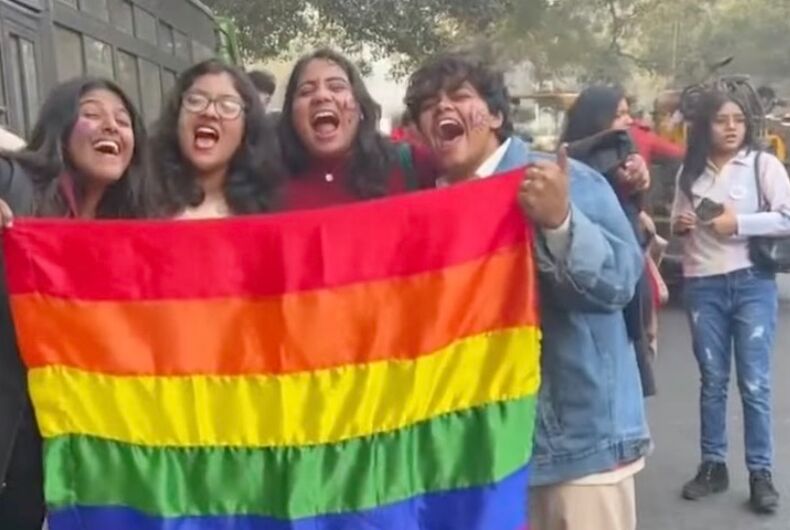 Last week Sunday, over 2,000 people marched in New Delhi’s first LGBTQ Pride Parade in three years. Until now, the pandemic had caused the repeated cancellation of the event.

“It’s good, it’s fabulous. Because we are here to celebrate ourselves, and after three years,” 23-year-old Vishal Rai told the Associated Press.

India has still not legalized marriage equality, but in a historic 2018 ruling, the country’s Supreme Court ruled that homosexuality would no longer be considered a criminal offense.

A colonial law, section 377, banned “carnal intercourse against the order of nature,” and had been interpreted to include sex between two people of the same sex. It carried a maximum penalty of ten years in prison.

Nevertheless, LGBTQ+ people are still fighting for the right to marry, but a parade volunteer, Noor Enayat has hope.

“Give it another 20 years. It will be a very different world,” Enayat said, comparing the utter lack of acceptance there was when she came out in 2003 compared to today. “So, I’m not going to be hopeless about it or say it’s not happening. It’s happening.”

Right now, a group of four couples is in the midst of a lawsuit that has gone before the country’s Supreme Court asking to legalize same-sex marriage. Gender law expert Jayna Kothari told the South China Morning Post that it will likely be a “long and drawn-out battle” and that the “government is going to fight this tooth and nail.”

She emphasized the importance of a continued grassroots movement to show the government “that more and more people are demanding recognition for marriage equality in India.”

Saurabh Kirpal, a gay lawyer whose sexuality has delayed his promotion to become a state judge, also emphasized that achieving marriage equality is only one step toward LGBTQ+ equality.

“Ultimately, the hope is that this precedent, if it does come, will lay groundwork for further moves to secure legal and practical equality,” said Kirpal.

A video of last weekend’s parade posted by Indian publication The Quint shows the endless queer joy exhibited as the thousands of people marched toward India’s Parliament while dancing, holding rainbow signs, and sporting colorful makeup and outfits.

“Homophobia has to go!” a group of men shout in the video.

“We are not yet at the stage in our country where everybody is aware about the identification of LGBTQIA+,” said a marcher named Ojas, who wore a shirt that read, “Being Happy Never Goes Out of Style.”

One marcher’s sign reads, “God said Adam and Eve, so I did both.”