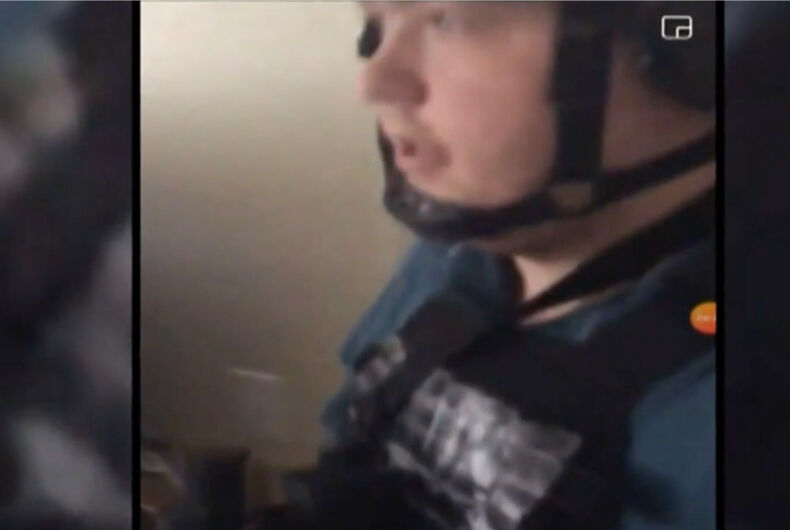 Anderson Lee Aldrich, the person suspected of killing five people and injuring 18 others in the Club Q shooting, had plans to become “the next mass killer,” according to recently unsealed court documents.

The damning statement reportedly came from legal documents about Aldrich’s June 2021 standoff with police. In that incident, Aldrich allegedly locked themself in their mother’s home with “guns, ammo, body armor and a homemade bomb” while wearing body armor, chugging vodka, and threatening to kill their grandparents at gunpoint.

“You guys died today and I’m taking you with me. I’m loaded and ready,” Aldrich’s grandparents said Aldrich said.

As SWAT teams descended on the house, Aldrich’s grandparents fled, and 10 nearby houses were evacuated. Aldrich reportedly live-streamed the standoff on Facebook.

“If they breach, I’m a f**king blow it to holy hell!” Aldrich reportedly screamed to the police before eventually surrendering.

Prosecutors originally said that Aldrich could be charged with seven offenses over the standoff, including three felony counts of kidnapping and two of menacing, the Associated Press reported. A judge’s order sought to jail Aldrich on $1 million bond, though Aldrich’s family successfully argued for it to be lowered to $100,000 if Aldrich sought therapy.

However, the case was dropped because none of Aldrich’s family members cooperated with police, the court documents state. Following the standoff, their mother and grandparents described Aldrich as “loving” and “sweet” in a court hearing.

The case was eventually dropped even though police found a “tub” full of bomb-making chemicals, handguns, hundreds of rounds of ammunition, body armor, magazines, and a gas mask in the grandparents’ home. Other relatives also warned that Aldrich would likely murder their family members if freed.

“We believe that my brother, and his wife, would undergo bodily harm or more if Anderson were released,” the grandmother’s in-laws, Robert Pullen and Jeanie Streltzoff, wrote in a statement to legal authorities at the time. “Besides being incarcerated, we believe Anderson needs therapy and counseling.”

The in-laws accused Aldrich of punching holes into walls and breaking windows in the grandparents’ home. The grandparents “had to sleep in their bedroom with the door locked” and a bat by their bed, the in-laws added.

Aldrich’s grandparents moved out of the state while the June 2021 incident was still under investigation, making it difficult for prosecutors to serve them subpoenas to testify against their grandchild under oath. Afterward, Aldrich’s grandmother reportedly gave Aldrich $30,000 which he spent on 3D printers to make guns, Aldrich’s relatives said.

Under Colorado law, the records pertaining to the 2021 standoff were automatically sealed after the case was dropped, preventing state officials from acknowledging their existence.

A judge unsealed the documents after Aldrich was formally charged Tuesday with 305 criminal counts including hate crimes and murder in the November 19 shooting.

Lawyers for Aldrich and Aldrich’s mother said that unsealing the documents would compromise the mother’s safety and prevent Aldrich from receiving a fair trial.

However, Judge Robin Chittum said that the “profound” public interest in the case outweighed Aldrich’s privacy rights. Chittum added that unsealing the documents would also allow herself and others to better understand the handling of the June 2021 standoff.

The 2021 standoff seems particularly relevant to the Club Q shooting since the former incident didn’t activate Colorado’s “red flag” law, something that could’ve prevented Aldrich from obtaining the sort of assault rifle allegedly used in the LGBTQ+ bar shooting.

This dude has the dumbest hot take yet about transgender people

You know the Golden Rule. But what about the Platinum Rule?