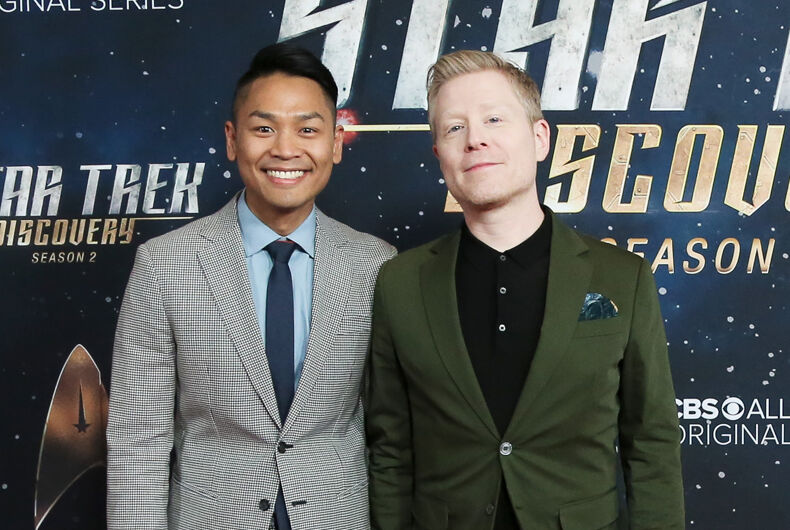 Star Trek actor Anthony Rapp and his partner Ken Ithiphol announced this week on Instagram the birth of their son, Rai Larson Ithiphol.

“Ken and I are thrilled to share that our family has grown!” Rapp wrote beside a photo of the joyful couple holding Rai.

“Our son, Rai Larson Ithiphol, was brought into the world on Friday, December 2, 2022, by an incredibly generous surrogate, to whom we are eternally grateful.”

He added that “Rai is pronounced like ‘rye’ or ‘chai,'” and also that “We love him very much.”

An endless stream of congratulations comments followed the post.

“Oh my gosh. My heart is leaping out of my body. So happy for the both of you,” wrote actor Telly Leung.

Actress Camryn Manheim added, “Welcome little one. I hope you can feel the sea of love that surrounds you.”

“There have been far too many messages from folks offering congratulations & loving kindness in the wake of yesterday’s announcement for me to be able to respond to everyone. But thank you!!! It’s already been an incredible journey, & it’s only the very beginning…”

In an interview with Oasis Magazine in 1997, Rapp explained that he primarily dates men but has also been in love with women and chooses not to identify solely as gay.

In 2019, he announced his engagement to Ken Ithiphol in a tweet that included a photo of the couple hugging.

“So something happened tonight,” his tweet said. “I asked Ken if he would marry me and he said yes. I am so very happy and I’m so very thrilled to share this news.”

Rapp also made headlines in 2017 for playing the Star Trek franchise’s first out gay character.

The news of his son’s birth comes only a few months after Rapp lost a civil lawsuit against House of Cards actor Kevin Spacey. Rapp had accused Spacey of an inappropriate sexual advance that allegedly occurred when Rapp was 14 and Spacey was 26. A jury found Spacey not liable.

Rapp later posted a statement on Twitter expressing his gratitude that the case was heard and thanking members of the jury for their service.

“Bringing this lawsuit was always about shining a light, as part of the larger movement to stand up against all forms of sexual violence,” the statement read. “I pledge to keep on advocating for efforts to ensure that we can live and work in a world that is free from sexual violence of any kind. I sincerely hope that survivors continue to tell their stories and fight for accountability.”