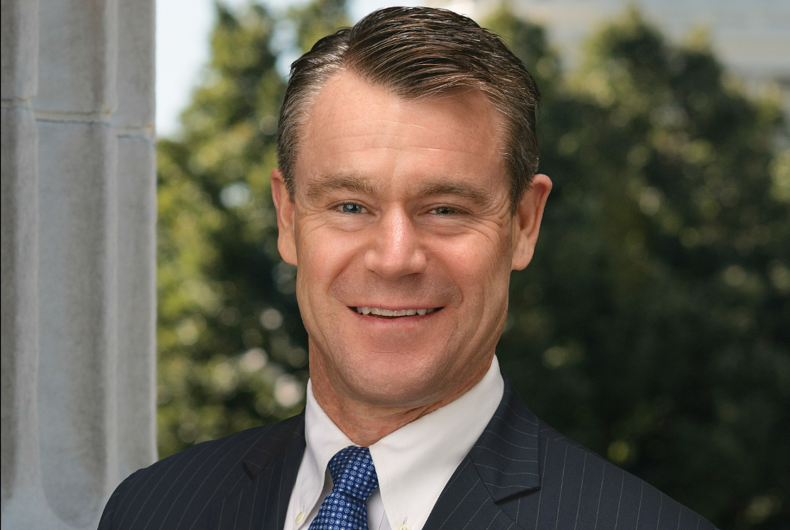 A local Indiana Republican group is so upset that one of their U.S. senators voted for the Respect for Marriage Act (RMA) that they sent him a letter of censure.

Sen. Todd Young (R-IN) is one of 12 Republicans in the Senate to vote in favor of the RMA last month, helping the bill to get past the filibuster. With 50 Democrats in the Senate, at least ten Republicans are needed to vote for progressive legislation to pass it.

“Same-sex couples ― many of whom are also people of faith ― want to be treated with dignity and respect as well,” Young wrote in an op-ed for the Indy Star, explaining his vote. “They don’t want to live in fear of their families being ripped apart by a future court decision.”

In the op-ed, he stressed that the bill – which would require the federal government and state governments to recognize same-sex and interracial marriages performed by other states if the Supreme Court overturns Obergefell v. Hodges – wouldn’t affect religious freedom.

“I would never try to persuade people to change the teachings of their faith, but I can explain why I think Christians should not be fearful of this legislation,” he wrote. “In fact, the explicit protections in this proposal offer far more in the way of religious liberty protections than currently under Obergefell, which leaves all such decisions up to the courts.”

That wasn’t enough for the Cass County Republican Party, which sent a letter of censure to Young, denouncing him for supporting same-sex couples’ rights.

“Unfortunately it is because of your vote [on the RMA] that the Cass County Republican Central Committee voted to send you this letter of censure,” the letter states. “Your decision elicited feelings of anger, disbelief, and even a sense of betrayal. We are not just fiscal conservatives, but social conservatives as well.”

“This bill enshrines and codifies in Federal law an incorrect understanding of marriage, further embedding it in the American legal fabric,” the letter continues. “It will enable and encourage litigation against those who disagree and hold a traditional understanding of the union. It opens the door to further degradation of marriage such as recognition of polygamous relationships.”

The Senate amended the RMA to say that it does not apply to polygamous marriages.

Proponents of the RMA say it is necessary since the Supreme Court overturned the federal right to an abortion in Roe v. Wade this past June in its Dobbs v. Jackson Women’s Health Organization, using legal reasoning that could be applied to end marriage equality. Justice Clarence Thomas wrote in his concurring opinion that the Court should “reconsider” Obergefell in light of its decision in Dobbs.

NEW: Indiana’s Cass County Republican party has drafted and sent a censure letter to GOP Sen. Todd Young over his support of legislation to protect same-sex marriage, per copy obtained by CNN, and has also begun circulating it to other GOP counties. Letter & email here: pic.twitter.com/YlzwPqOCsa