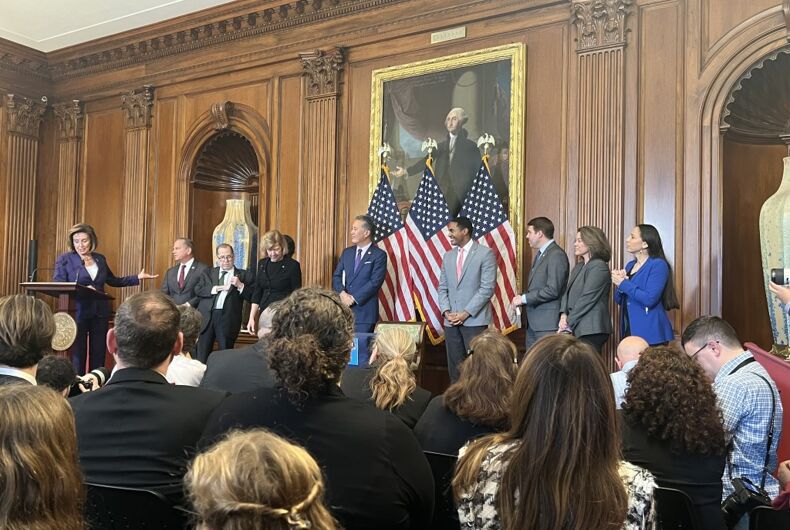 The House passes the Respect for Marriage ActPhoto: Jay Lassiter

When Congress took a marriage equality vote last July, the bill passed 267-157 with 47 Republicans joining the entire Democratic caucus to advance the bill.

Today, modified marriage legislation passed by a 258-169 vote. That tally includes 39 Republicans who joined the Democratic caucus to pass the bill.

For many on Capitol Hill, the marriage bill was just another item on a busy “lame duck” smorgasbord that included legislation to fund the Pentagon, among other high-profile items. With control of the House changing hands next month, many Capitol Hill regulars were more focused on the upcoming change of power than today’s attempt to codify marriage equality into federal law.

But for at least one member of Congress, today’s marriage equality vote was more than just a juicy footnote on an otherwise busy day.

Rep. Donald Norcross (D-NJ) represents a South Jersey district in the Philly burbs. An electrician by trade, he’s also the proud father of a gay daughter. His floor speech during the first vote was remarkable for all the right reasons.

“We’re gonna get it right and get it finished most importantly,” Norcross told LGBTQ Nation before the vote, explaining the need for a second vote. “The Senate had their view on it and we passed our version here in the House and there were some language changes that had to do with religious freedoms and there was consensus to come together. We thought it was extremely important so it’s back here under the Senate version that they voted on so we pass it today, it goes right down Pennsylvania Avenue to the White House for the president’s signature.”

Historic? Yes! But on a hectic and uncommonly warm day on Capitol Hill, it might be hard to stop and smell the roses.

“I don’t know that I’ll smell the roses today but I’m sure after the vote, I’ll call my daughter,” Norcross said. “And every day that I speak to my daughter and daughter-in-law and every morning that I get a pic of my grandson, it’ll remind me that the nation now approves of their love.”

“There’s nothing preventing me from coming back and making it better,” Norcross said. “But given what’s been happening literally right across the street from where we’re sitting in the Supreme Court, timing-wise, this is incredibly important.”

The U.S. Supreme Court, which recently upended abortion rights, has telegraphed that previous gay marriage rulings might be next on the high court’s chopping block.

“This was designed to make sure that my grandson won’t have to worry about his moms being split up,” Norcross said of today’s bill.

He also noted the magnitude of passing historic LGBTQ+ legislation through a narrowly divided Congress.

“Here’s is a 50-50 Senate, we have the White House and it’s very important that we get this done,” Norcross said. “Here you’ve seen Congress, which is known for not getting things done recently over the past few years, we got a lot done this year and we’re finishing up this session with the sanctity of marriage for who you love. It doesn’t get much better than that.”

After the vote, lawmakers who led the battle, including Sen. Tammy Baldwin (D-WI), gathered in Speaker Nancy Pelosi’s (D-CA) outer office for a ceremony to mark the occasion.

When Pelosi repeatedly dabbed away happy tears and called today “a glorious day of love and freedom,” the crowd roared its approval. Even if, according to Norcross, there’s still work to do.

“I don’t think that everybody is comfortable moving to any town they want if they’re in a same-sex marriage and not everyone is fully accepting. Time will take care of that, But we still have some growing pains, but we’ve come a long way.”

With the LGBTQ+ portion of today’s agenda giving way to other legislative business, Norcross’ legislative staff were keen to brag about their boss.

“Congressman Norcross has demonstrated his commitment to LGBTQ issues by elevating queer people to senior positions in his office,” Burdick told LGBTQ Nation. “He doesn’t take any guff from anybody on LGBTQ issues. He’s sticking up for every queer kid in America who felt closed out or voiceless. He’s voted, given speeches, sat for interviews, and written op-eds with a consistent message: LGBTQ people are no different than anyone else, and we deserve the same rights as everyone else. Period.”

Republicans are about to take control of the House. But they can’t control themselves