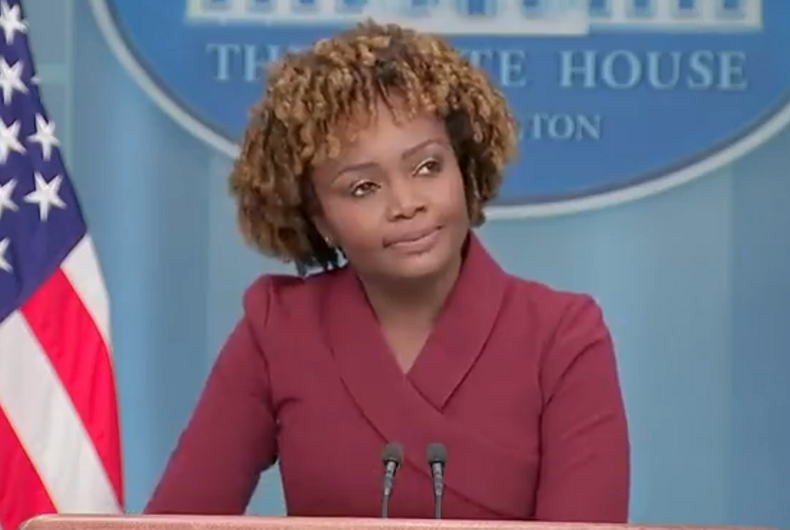 Out White House Press Secretary got attention online for an unusual moment at the White House press briefing on Thursday when she ended the press briefing and left due to a reporter’s inability to stop talking long enough for her to answer questions.

“Can you take a question on the U.S.-Africa Summit?” shouted Simon Ateba – who works for Today News Africa – at the press briefing. Ateba has been described by the Daily Mail as “one of the loudest members of the briefing room’s awkward squad.”

“Karine, why is it so hard to take a question on the U.S.-Africa Summit when the president is meeting 50 African leaders, the biggest gathering of leaders of his administration? Why is it hard for you to give me a question?” he said.

“It is not hard. I’ve answered…” she started.

“No, it is hard, because it’s been months,” Ateba replied.

“Would you let me answer the question? Or are you going to-” Jean-Pierre tried to ask.

After some back-and-forth, Jean-Pierre gave up on Ateba and tried giving another reporter time to ask her a question.

“Can I ask a question?” Ateba shouted again.

He kept shouting, and she told him a few times that she couldn’t answer if he didn’t stop talking, so “your colleague is going to ask a question.”

But that didn’t stop Ateba, so Jean-Pierre shut down the briefing.

“Okay. Thanks, everybody,” she said, rolling her eyes and folding her binders. “I’ll see you tomorrow.”

And she was gone.

On Twitter, Ateba complained about not being invited to the White House Christmas press party.

They write, "Simon Ateba of Today News Africa, who has gotten into several arguments with the White House about not being called on at press briefings, told the Caller that his lack of invitation is “disappointing.”https://t.co/eNvzTK5UQM

His pinned tweet – usually a Twitter user’s favorite tweet or a tweet that they feel describes who they are – is from earlier this month and is a complaint about how he never gets to ask questions at press briefings.

President @JoeBiden's @PressSec @KJP46 is black like me. President Biden is about to host nearly 50 African leaders, the biggest gathering of leaders in his entire presidency. Yet, Biden and Karine do not give questions to the African journalist covering the @WhiteHouse. How sad! pic.twitter.com/bCfzDihc4k

Last month the White House press briefing descended into chaos as Ateba called out Jean-Pierre for not taking a question from the far-right Daily Caller’s Diana Glebova. Glebova wanted to ask briefing room guest Dr. Anthony Fauci about the origins of COVID-19 – the subject of many conspiracy theories on the right – even though the briefing was about “the importance of getting your updated COVID vaccine shot ahead of the holidays.”

“I asked myself where is [Jean-Pierre’s] heart?” he wrote on Twitter after that interaction.

Elliot Page looks studly on the cover of his upcoming memoir