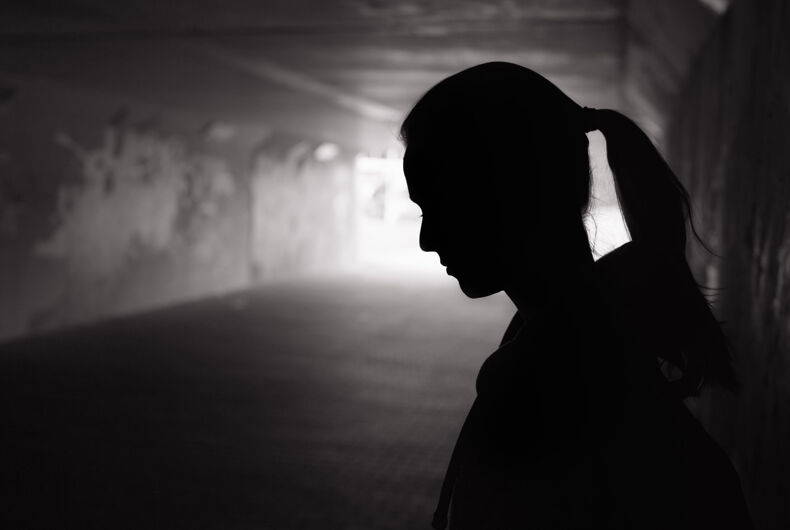 Loneliness can be a real struggle for LGBTQ+ people all year round, but even more so in winter.

It’s cold outside, friends travel home to be with their families, the nightclub scene isn’t as active, there aren’t as many activities going on, and people have plans, all of which can contribute to feelings of isolation.

LGBTQ Nation spoke to three LGBTQ+ people about their experiences with winter loneliness and how they combat it.

Diva Perry described this time of year as “one of the worst” for them.

“The loneliness I feel is so deep and painful, it’s hard to express,” Diva begins.

“I see my friends with their significant others and it puts an ache in my heart and a feeling of jealousy. As a queer person, it feels even harder for some reason, especially when you see queer couples so content and this deep aching for want and love hits you hard.”

On why queer loneliness is a problem, they believe the community is often the “last to get helped” or to receive attention.

“It feels like loneliness in general is hard to placate but queer loneliness feels almost dire. It’s a hard thing to overcome, truly.”

When trying to tackle these demons, Perry surrounds themselves with family members, but this can also provide challenges. As a single person, Perry struggles to constantly be around those who have a significant other.

“It’s hard for me. I honestly haven’t found a way to get rid of that deep, achy loneliness, especially in the winter months. It’s almost enough for me to make me reach out to an ex, but I try hard not to.”

Diva wants queer loneliness to be recognized as more of an issue within society. As a very loving and sociable person, and as someone whose love language is physical touch, they possess a deep longing to feel loved and wanted.

“I think we as queer people have struggled a lot with not feeling wanted or loved and look for that in different ways, and the winter months are so dark and lonely that it just expands the loneliness to a whole new level of aching.”

Meanwhile, Nic Fearn does have a significant other – but the loneliness settles in when they’re apart.

Fearn’s partner works in hospitality and is always home late. Feeling lonely can trigger Fearn’s depression, which he’ll have to battle harder when his partner works over the Christmas period.

“My partner works long hours and often late into the early hours of the morning. He also works most weekends, while I work remotely Monday through Friday,” he says.

“The reality is that, on some days, we barely see each other. As someone who is autistic and who has depression and other mental health problems, I get really lonely when my partner is not at home.”

“I also have times when I isolate myself from others as a result of my depression. But I must admit, visiting my parents when my partner works makes me feel a lot better.”

Nic also utilizes social media and TV in his low moments, as he finds cheery content gives his mood a boost.

“If I’m not up to leaving bed because of feeling depressed, I like to watch a happy film or TV show on Netflix. It might sound a bit cringy, but by immersing myself in television, I feel like I become friends with the characters.”

Finally, Kollyn Conrad, shares how he spent a lot of time hiding his true self and “building mental hurdles” while growing up.

“Reflecting on my past, I remember what seemed to be simple pleasures that my heterosexual peers took for granted. Attending the winter formal was an opportunity that I would sit out. For safety and fear of torment, I would pretend school dances were boring, though quietly fantasize about kissing him underneath the mistletoe.”

“Simply missing a dance isn’t the whole point. Many of us grow up with a lack of an affirming childhood. Not having a haven for expression, we pass on opportunities to build lasting memories. We isolate ourselves in order to survive. The holidays become agonizing as you’re only trying to pass the moments.”

Conrad adds that in order to combat queer loneliness, winter celebrations need to stop being so exclusionary.

“The LGBTQ community needs affirmation to thrive. It could be the secret Santa at your workplace conforming to the binary or a school dance not nurturing a safe experience for all. We should work to better understand the foundation of the discomfort before passing off the struggles.”

In the past, he’s also found solace in picturing a future for himself, which he can now reflect back on with pride after moving from his hometown and starting to live as authentically as possible.

“Focusing on what I could control in difficult moments strengthened me. I worked diligently to develop my education while I planned an escape to an accepting place.”

The dazzling Christmas markets of Vienna