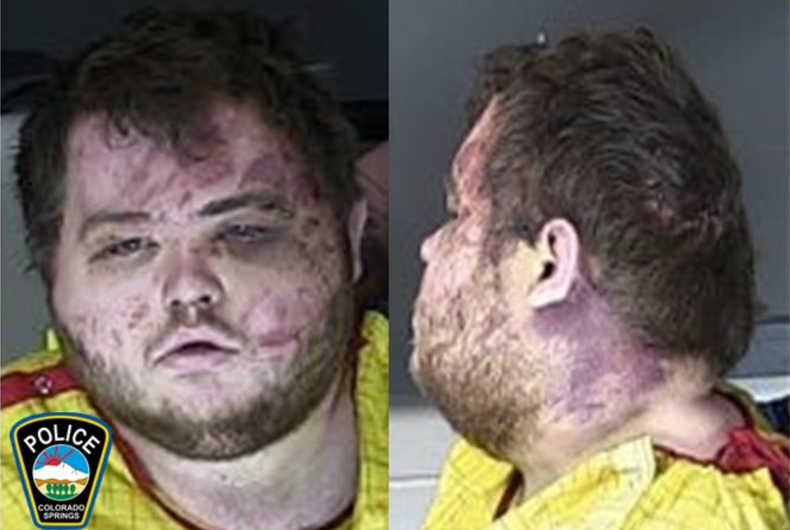 Anderson Lee Aldrich’s lawyer referred to his client with he/him pronouns in an El Paso County, Colorado courtroom hearing this past Tuesday.

On Saturday, November 19, Aldrich allegedly entered the LGBTQ+ bar Club Q in Colorado Springs, Colorado and immediately and indiscriminately opened fire with an AR-15-style rifle, killing five people and injuring 18 others before Aldrich was tackled and beaten by bar patrons.

The next Monday, Aldrich’s lawyer referred to Aldrich with he/him pronouns in court documents. Aldrich’s family and friends had referred to Aldrich the same way and no one who knew Aldrich before the shooting had ever mentioned Aldrich being anything other than a cisgender, heterosexual male. Aldrich’s father even said that his first worry when he heard that his child killed five people in an LGBTQ+ bar was that Aldrich might be “gay” and that he was relieved when he found out Aldrich wasn’t, and a former neighbor said that Aldrich regularly used anti-LGBTQ+ slurs.

But by the Tuesday after the shooting, Aldrich’s lawyer included a paragraph in a court document: “Anderson Aldrich is non-binary. They use they/them pronouns, and for the purposes of all formal filings, will be addressed as Mx. Aldrich.”

That was enough for many on the right to conclude that their anti-LGBTQ+ rhetoric – heightened this year by referring to LGBTQ+ people as “groomers” who want to turn kids gay or transgender – had nothing to do with the alleged anti-LGBTQ+ hate crime.

That is, many anti-LGBTQ+ activists enjoyed being able to blame mass murder on an LGBTQ+ person.

Some LGBTQ+ people countered that Aldrich might have had a gender revelation just days after the shooting in an attempt to avoid hate crimes charges. They are now claiming vindication after Aldrich’s lawyer referred to his client with he/him pronouns during the hearing on December 6 where Aldrich was formally charged with 305 criminal counts, including hate crimes charges.

In video of the hearing, Aldrich’s lawyer can be heard referring to his client exclusively with he/him pronouns. Still, he also used the honorific “Mx.” Aldrich didn’t visibly react to the lawyer’s words.

It’s unclear whether the he/him pronouns are a sign that the lawyer abandoned portraying Aldrich as nonbinary as a possible strategy or if he was misgendering his client by incorrectly using the wrong pronouns.

The judge also referred to Aldrich with the word “he” and no one corrected the judge.

“Did anyone else watch the Anderson Lee Aldrich/Club Q hearing?” University of California, Santa Cruz grad student Eli Erlick commented on Twitter. “His lawyer is using he/him pronouns since Anderson was [charged] with a hate crime anyway. He now has no reason to keep up the nonbinary ruse other than defaming our community.”

“anytime someone makes a comment about nonbinary people just wanting to be special, i’m going to think about this person who literally put on my pronouns in an attempt to lessen the charges. and how his own father was relived [sic] he was a murderer, not a queer person,” one person who has “they/them” pronouns in their Twitter bio responded.

anytime someone makes a comment about nonbinary people just wanting to be special, i'm going to think about this person who literally put on my pronouns in an attempt to lessen the charges. and how his own father was relived he was a murderer, not a queer person.

“there still isn’t any evidence that the defense’s position about their client’s identity has changed via a written or oral motion,” countered Lambda Legal attorney Carl Charles. “basically all I see are a couple of large accounts saying this was a ruse when really it just seems like misgendering when taken in context.”

basically all I see are a couple of large accounts saying this was a ruse when really it just seems like misgendering when taken in context. If the lawyers did this for strategy I will be the first to speak on with the CO bar but so far they are consistent and bad w they/them.

My wife & I decided to get pregnant in secret. Here’s how we did it