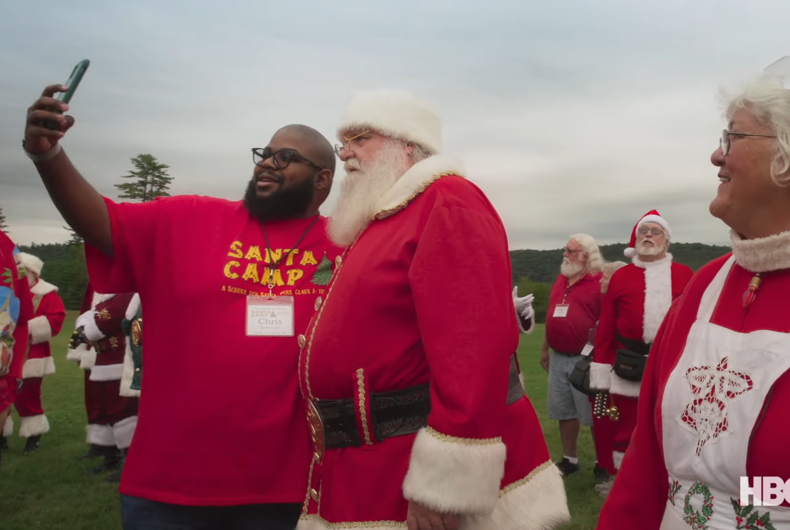 In Nick Sweeney’s engaging holiday documentary, Santa Camp, now showing on HBO Max, we meet four very different campers, all with one clear objective: to be the very best Claus they can be.

The titular Santa Camp is held annually amid the rolling hills of New Hampshire, in classic summer camp style: in the woods among cabins and lakes and nightly bonfires. Ho-ho-ho’s echo over clear blue water, and dozens of red-suited St. Nicks traipse through the forest.

Pretty much all of them are old white guys. Enter Black Santa Chris, disabled Santa Fin, and transgender Santa Levi with his wife, Dr. Claus Heidi, part of an effort by Santa Camp higher-ups to broaden the white-bearded one’s Northern European appeal.

In the film, director Sweeney follows the diverse band of Claus coeds before, during, and after their Santa Camp adventure and sees more similarities than differences in the group.

“I think that everybody goes to Santa camp to be the best possible Santa they can be,” says Sweeney. “You know, it’s a really hard job being a Santa. They’ve got to be a psychologist and a babysitter and a confidante, and also a magician. It’s a massive commitment. And it’s physically exhausting.

“The similarity that I saw was just how dedicated they and the existing traditional, old-guard Santas were in their commitment to being the best possible Santa they could be. They all want the same thing. They want to bring joy to kids and to, like, just be a really, really good Santa.”

Yet differences remain: what cookie they prefer kids leave for them and where to spend Christmas Day (the North Pole or Hawaii).

We posed those hard questions and more to the Santa Camp campers and the film’s director Sweeney. Following are their funny, forthright, and heart-tugging answers.

Director Nick: Going to the beach, which is what we do in Australia, where Christmas is often scorchingly hot!

Santa Chris: When my dad got me WCW vs NWO on Nintendo 64.

Trans Santa Levi: The year I got a BMX bike.

Dr. Claus Heidi: The year I got a blue and green HUFFY bike, it was a huge upgrade from my sister’s pink banana seat hand me down.

What’s your favorite Christmas carol, and why?

Director Nick: After seeing Santa Chris perform it, “Juicy” by the Notorious B.I.G.

Trans Santa Levi: “Wrapped in Red” by Kelly Clarkson because she’s amazing and it’s one of the best Christmas albums out there.

Dr. Claus Heidi: “Carol of the Bells” because I’m a choir geek and I love the percussive vocals.

Santa Fin: “We Wish You A Merry Christmas” because it spreads joy.

What’s the best cookie to leave Santa? And what do you wash it down with?

Santa Chris: I like cinnamon rolls instead of cookies with a glass of almond milk because I’m lactose intolerant.

What’s the best thing about working at the North Pole?

Santa Chris: The teamwork that goes into putting smiles on faces.

Trans Santa Levi: The narwhals and the arctic puffins.

Santa Fin: Working with the elves.

Who is your favorite reindeer, and why?

Director Nick: Rudolf because he overcame adversity and is a survivor.

Santa Chris: Comet because of speed.

Dr. Claus Heidi: Comet…because they fall from the sky!

When you’re not delivering presents on Christmas Eve, what do you like to do in your off-time?

Santa Chris: Watch football and play board games with the family.

Santa Fin: I like to swim and go to the beach. I like traveling on airplanes. I do like being Santa at the mall, or in parades and other events. Even during the summer!

Santa Chris: Die Hard. Yes, it is a Christmas movie! And Home Alone 2.

Trans Santa Levi: Rudolf the Red-Nosed Reindeer because of the island of the misfit toys… and because he just wanted to be a dentist and follow his passion!

Besides yourselves, if you could cast Santa in a Hollywood blockbuster, who would it be?

Director Nick: I think Nathan Lane could bring something unique to the role.

Dr. Claus Heidi: Michael Peña because he can play any character and our Latinx youth need to see themselves in Santa, too!

Santa Fin: I would cast my direct support person Adin as Santa (he is already one of my elves).

Christmas at the North Pole or Christmas in Hawaii?

Director Nick: Hawaii, for sure.

Dr. Claus Heidi: Hawaii because that’s where Trans Santa would be!

Who would you rather hang out with: kids who were naughty or nice kids?

Santa Chris: The naughty kids might be more fun.

Santa Fin: Kids who were nice!

Now that climate change is an issue, coal is a bad option to leave naughty kids in stockings. What’s your alternative?

Dr. Claus Heidi: There are no naughty kids, only naughty behaviors. The alternative to coal is addressing trauma, providing unconditional support, and helping each other become better human beings.

What would you ask for this year if you were sitting on Santa’s lap?

Santa Chris: A trip to LA with free Comfort+ airfare.

Dr. Claus Heidi: Consent matters and I would not consent to sit on Santa’s lap… unless it was my spouse (aka Trans Santa) and all I would ask is that he keeps loving me for the rest of our lives.

What was your favorite moment at Santa Camp?

Director Nick: Seeing the Clauses kayaking on the lake, which looked like they were floating in a black abyss. That was very surreal.

Santa Chris: Meeting Fin and seeing the joy on his face.

Trans Santa Levi: The golf cart and how excited Heidi was to drive around in it.

Santa Fin: Meeting other Santas like Santa Dan, Santa Chris, and Santa Levi was one of my favorite moments. And the snow machine. Also, eating Christmas cookies.

What was the worst?

Director Nick: At one point, the producer Stacey Reiss and I nearly crashed our golf cart into a log cabin.

Santa Chris: The food. It wasn’t terrible but it also wasn’t my cup of tea.

Dr. Claus Heidi: The panel! It was sexist, heteronormative, antiquated, and reinforced so many toxic tropes about Santa Claus.

Besides one another, who was your favorite Santa or Mrs. Claus at Santa Camp?

Director Nick: There were a lot of professional elves who didn’t get much screen time. Maybe they can be in a sequel?

Trans Santa Levi: Santa Dan because I feel like he’s really trying to diversify the association.

Dr. Claus Heidi: Enchanted Santa! We had a Santa who wished to remain private come out to us at camp, stating that he was an “enchanted Santa too” and that it meant so much to him to see us be so visibly our full selves.

Santa Fin: Santa Dan Greenleaf because he taught me how to wave to the crowd during a parade (point and wave).

What’s the most important thing you learned at Santa Camp?

Director Nick: That being a Claus is hard work, but that everyone has their own Santa style.

Santa Chris: Being Santa is all about the heart that you put into it.

Trans Santa Levi: There are a lot of aspects about Santa that I hadn’t really thought about, like a backstory and how to navigate kids’ questions.

Dr. Claus Heidi: All of the safety measures we need to take as Clauses.

Santa Fin: Being Santa is important because it makes people happy!

What’s the best thing about Christmas?

Director Nick:  That people get to spend time with their families and chosen families.

Santa Chris: Time with my family.

Dr. Claus Heidi: The intangible magic moments and experiences throughout the season. Plus… PRESENTS!

Santa Fin: Spreading the joy, love, and magic of Christmas to others.