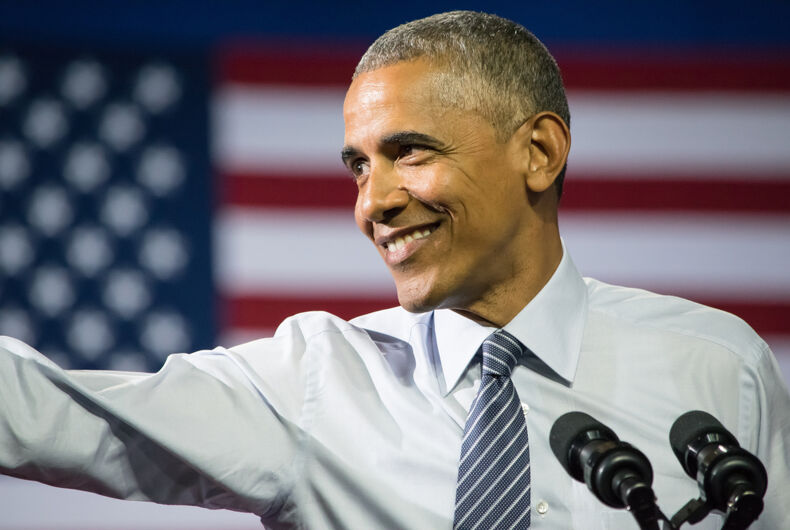 Walker, who is running for a U.S. Senate seat from Georgia against Sen. Rev. Raphael Warnock (D-GA), went on a rambling speech a few weeks ago where he told supporters: “I don’t want to be a vampire anymore. I want to be a werewolf.”

“I don’t know if you know, but vampires are some cool people, are they not?” he said at the campaign event. “But let me tell you something that I found out: a werewolf can kill a vampire. Did you know that? I never knew that.”

His words struck Obama – himself a former U.S. senator – as particularly funny, so he brought them up at a campaign event for Warnock.

“Since the last time I was here, Mr. Walker has been talking about issues that are of great importance to the people of Georgia,” Obama said. “Like whether it’s better to be a vampire or a werewolf.”

“This is a debate that I must confess that I once had myself… when I was seven,” he said, getting laughs. “Then I grew up.”

“In case you’re wondering, by the way, Herschel Walker decided he wanted to be a werewolf. Which is great! As far as I’m concerned, he can be anything he wants to be, except for a United States senator!”

Obama: Mr. Walker has been talking about issues that are of great importance to the people of Georgia like if it’s better to be a vampire or a werewolf.. This is a debate that I must confess I once had myself.. when I was 7 pic.twitter.com/TonaibyZ1u

Walker has a history of anti-LGBTQ comments and he has made his opposition to equal rights for transgender people his final argument in the election.

Last month he said he doesn’t even know what a pronoun is while mocking transgender people serving in the military (Walker has never served in the military).

“I’ll tell you the definition of a man and a woman, because it’s in the Bible,” he said. “A man and a woman are two different people,” adding that men can’t get pregnant.

“Pronouns? What’s a pronoun? I can tell you, a grenade don’t care about their pronouns,” he said.

He finished the general election about 35,000 votes behind Warnock. Since neither got more than 50% of the vote because of out gay Libertarian candidate Chase Oliver, they’re facing off in a runoff election on December 6.