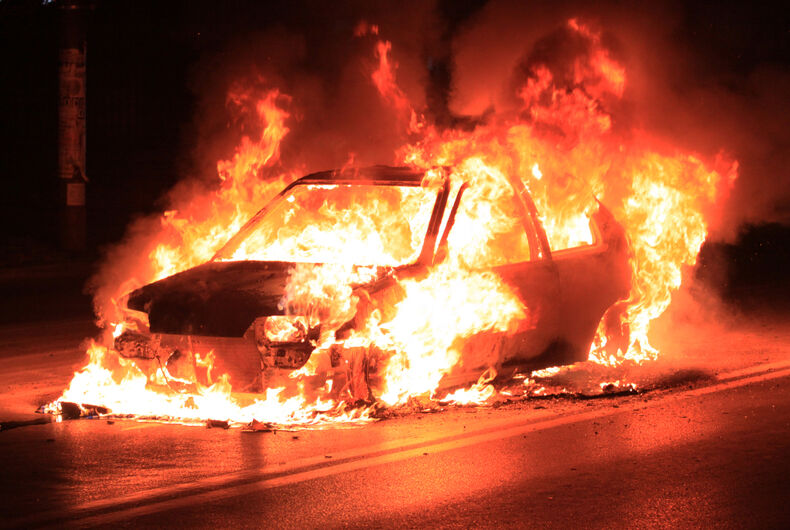 An LGBTQ+ bar was attacked just after Morocco beat Portugal in the quarterfinals of the World Cup this past Saturday when a mob descended on the bar during post-game riots. The attackers even allegedly set two cars on fire that were outside the bar.

The owners of the bar, Le Backstage in Perpignan, France, described the events in what they believe was an anti-LGBTQ+ attack.

“Around 30 young people literally laid siege to the bar at the beginning of the evening, knocking on the door for 15 minutes, throwing firecrackers at it, climbing on the car outside the bar,” Alain and Enzo, managers of the bar told the magazine 20 Minutes, which noted that the bar opened at 8 p.m. that day. “Then, seeing that we weren’t going to open the door, they broke the windshield and the rearview mirror on the car.”

The managers said that the mob lit the car on fire and that the car parked next to it on the street caught fire as well.

“For years, we have been the victims of regular homophobic attacks,” they said. “During Ramadan this year, the attacks got bigger in scale, with people throwing rocks at the door when we opened it, TVs and furniture too, whatever they could find in the garbage around the bar.”

Six people ages 16 to 18 were arrested in connection to the attack, but authorities were unable to show their individual responsibility for the attack so they were let go.

“It has been established that this was a homophobic act,” the organization said on its website, saying that it will participate in a possible civil lawsuit against the perpetrators.

The group said that it met with a prosecutor and the head of the Pyrénées-Orientales police department on Tuesday.

“During the meeting, several concrete measures for deterrence and protection were discussed in order to assure the space’s security and the tranquility of people who go to LGBT spaces in Perpignan, in particular Le Backstage,” the group said. “Special attention was given for future World Cup matches.”