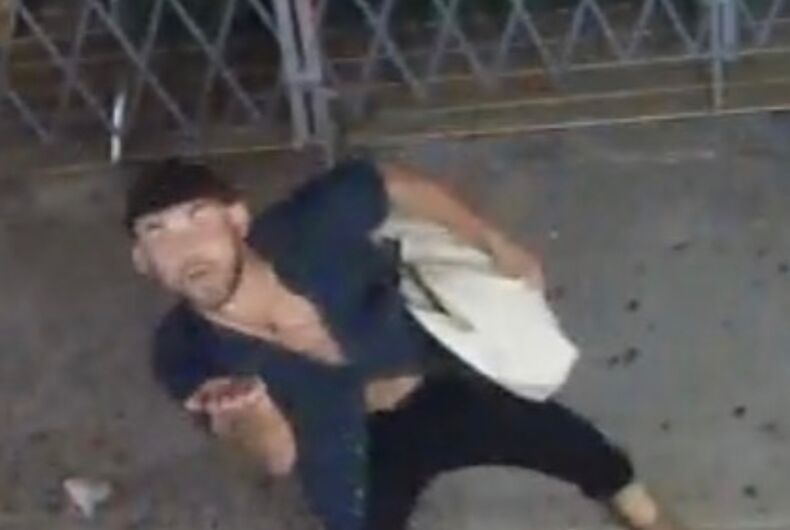 Alex Blodgett was originally indicted last September for a series of arson and related attacks on August 16, 2021 on Manhattan’s west side. Following the arraignment, a search warrant of the defendant’s Facebook account was signed and executed, yielding “evidence that demonstrated an anti-gay animus, particularly towards gay men and establishments geared for the LGBTQIA+ community,” according to the district attorney’s office.

Blodgett’s fiery rampage started late on a Sunday night on West 13th Street near 7th Avenue at the Lesbian, Gay, Bisexual & Transgender Community Center in Greenwich Village, commonly known as The Center. According to court documents, at approximately 1:06 a.m. the defendant tied a rag to The Center’s front door’s handles and set it ablaze, before setting fire to a trash can and a large potted plant adjacent to the entrance.

Blodgett then moved north to Hell’s Kitchen, where security footage captured the defendant hurling rocks at the Atlas Social Club at 9th Avenue and 51st Street, smashing the front windows of the popular gay bar. At approximately 2:38 a.m., Blodgett was two blocks south on 9th Avenue at 49th Street, where he set fire to the outdoor dining shed of Thai restaurant V{IV}, igniting a blaze that caused significant damage to the structure.

At 4:07 a.m., Blodgett was in Chelsea, at the corner of 8th Avenue and 19th Street, where he set fire to the dining shed at French restaurant LouLou. As employees inside the restaurant looked on, the outdoor structure ignited, the blaze spreading to the façade of the restaurant. Calls to 911 brought police to the scene, where Blodgett was chased down and apprehended, lighter in hand. He was taken to Bellevue Hospital for psychiatric evaluation and later charged with arson.

Announcing the enhanced charges, DA Bragg said: “Hate has no place here in Manhattan and New Yorkers of all backgrounds deserve to feel safe. As alleged, this individual left a wake of physical destruction but also made an entire community unsafe because he targeted LGBTQIA+ establishments. We will continue to vigorously investigate and prosecute these types of unacceptable bias incidents.”

On the afternoon of the attack, Atlas Social Club posted to Instagram: “New windows! This morning we woke up to the news that at 2:30 AM a… let’s call him ‘troubled individual’ smashed all our windows and then proceeded to light on fire the sidewalk structures of two other restaurants down 9th Avenue. Thankfully, with the help of the @nypd said individual has already been apprehended. Let’s hope the new windows last… Anybody else needs a drink?”

Quieter queer spaces are worth protecting too