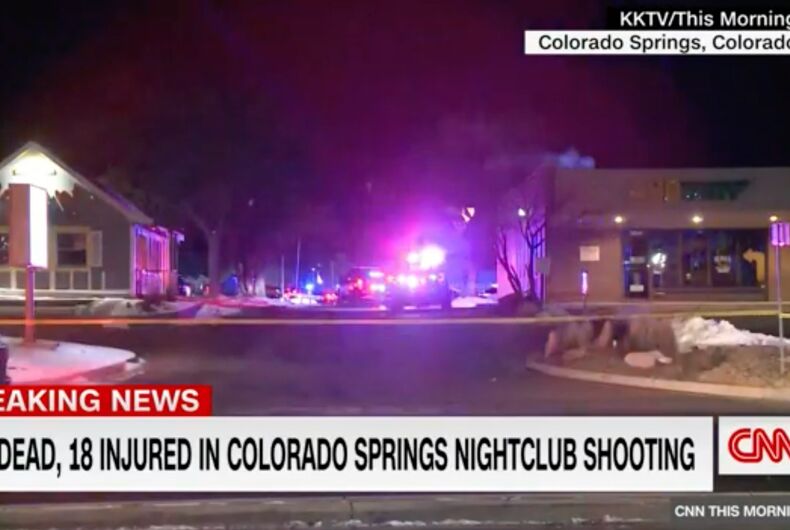 Bartenders Derrick Rump, 38, and Daniel Aston, 28, were both killed in the shooting. Aston was a transgender man.

“He was a trans man and they feel strongly that speaking out may help others,” Sherry wrote.

Jim and Sabrina Aston’s son Daniel died last night at Club Q. He was a bartender but last night he was also performing. He was a trans man and they feel strongly that speaking out may help others. This is a photo of them holding a photo of Dan at 5 years old. Story TK. pic.twitter.com/X2DeBVTDUE

Jeff and Sabrina also spoke with Sherry for an interview, in which they told her that they knew Aston was trans when he was four.

“I always worried about it,” Sabrina said. “He’s a trans man and the trans community are really the biggest targets I can think about it right now.”

Aston had reportedly moved to Colorado Springs to be near his parents, who moved there to be closer to their grandchildren.

Once he began working at Club Q and building his Colorado Springs community, Sabrina said he was “the happiest he had ever been.”

“He was thriving and having fun and having friends. It’s just unbelievable. He had so much more life to give to us and to all his friends and to himself.”

Despite their inconceivable pain, Sabrina and Jeff are speaking out to help protect other trans people.

“We need to get our legislators and our people high up to have a voice for us,” Sabrina said. “Those are our children, we do not care how you dress or what you identify as. It doesn’t harm anybody.”

Rump, the other identified victim, was described by friend Anthony Jaramillo as “loving, supportive, with a heavy hand in his drink pouring, and just a really good listener.”

Jaramillo told CBS News that Rump “would not be afraid to tell you when you were wrong instead of telling you what you wanted to hear and that was really valuable.”

“I guess I’m just waiting for someone to be like, ‘Oh, it’s the wrong Derrick.”‘

Tiara Latrice Kelley, a Club Q performer, told The Gazette that Rump was “all about keeping people happy.”

The tragedy of it is mind numbing. Two bartenders…two co-workers…two friends, Derrick Rump and Daniel Aston, were among the five killed at Club Q in Colorado Springs. pic.twitter.com/Pq9gSriY8J

The shooting is currently being investigated as a possible hate crime, according to CNN. The suspected shooter, 22-year-old Anderson Lee Aldrich, is in police custody.

Aldrich is the grandson of California state Assemblyman Randy Voepel, a MAGA Republican.

**Editor’s Note: This article originally misstated that Derrick Rump was a co-owner of Club Q. It has been updated.

**Editor’s Note: This article originally stated that 25 people were wounded in the shooting. The correct number is 18.