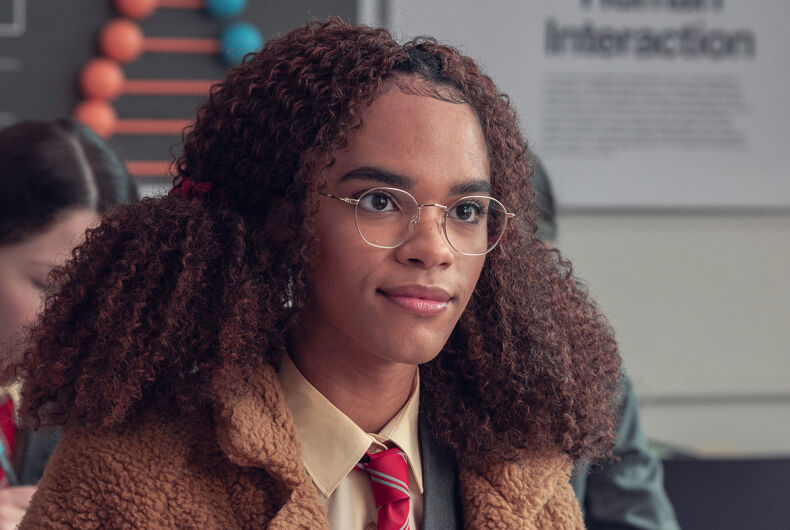 Yasmin Finney — the 19-year-old British transgender actress who plays Elle Argent in Netflix’s dramedy series Heartstopper and who will soon play a companion role in the sci-fi Doctor Who series — revealed in a recent interview that her former bullies now congratulate her for her success on social media.

Growing up as a poor, Black, queer girl, she had bullies, including “football players who would trip her up and shove her in hallways, call her names and do limp-wristed impressions,” the fashion publication wrote.

Finney grew up longing to wear girl’s clothing, wearing a pink tutu around her family home, and hating to change in boys’ lockerrooms. She used Google to search topics about femininity, why she felt like a girl, and why she had a penis. During her high school specialization exams, she showed up wearing a skirt.

Years later, she gained a viewership online by sharing her transition on the video-sharing app TikTok. Now she has over 1.8 million followers. Though she sometimes gets negative comments on her social media posts, some of her old bullies have written to cheer her emergence as a television actress.

“I don’t hold grudges, but you know,” she laughed. “It’s crazy to think how the script’s flipped.”

“All the people that doubted me, they’ve got nothing on me anymore, you know? Not that I did it for them, but it’s like the cherry on top,” she added. “I just like to know that people are realizing that everything I did from a young age, I wasn’t in the wrong. Everything I did was perfectly fine.”

British TV creator Russell Davies, who serves as the showrunner for Doctor Who, told the publication that he cast Finney after she “stole the show” during her audition. He said it’s been an “education … to see someone commanding such attention – and let’s face it, such enmity – with grace and wit and a wonderful smile.”

Finney said of her casting to NBC News, “If anyone would have told 8-year-old Yasmin that one day she’d be part of this iconic show, I would have never in a million years believed them. This show has a place in so many people’s hearts, so to be seen as a trans actress by the legend himself Russell, has not only made my year, it’s made my life.”

Finney recently moved into her first apartment in Manchester, England’s “gay village” where she will celebrate her 20th birthday with her chosen queer family.

“Now I get to give myself the childhood fantasy, and raise myself up the way that I should have been raised,” she told the magazine.

GOP candidate denies her vulgar texts are homophobic. Instead she thinks they mean she’s strong.