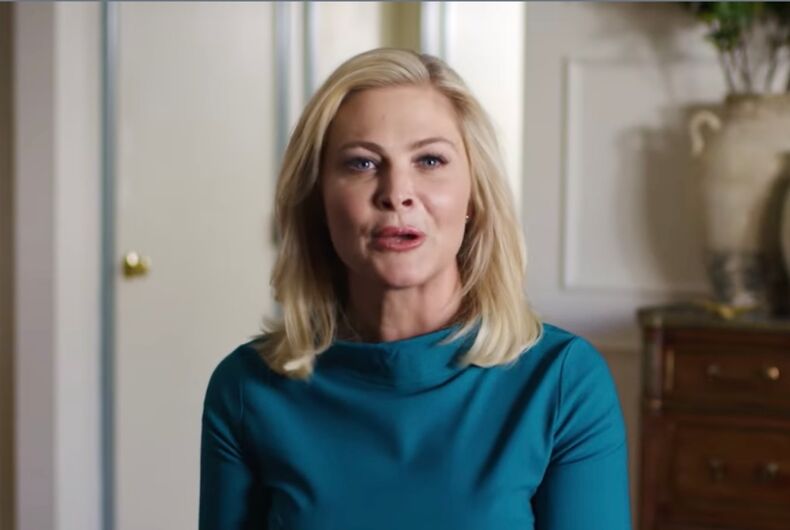 Rhode Island Republican gubernatorial candidate Ashley Kalus is defending a series of vulgar and allegeldy anti-LGBTQ text messages she sent to a Chicago contractor in 2018, saying they aren’t homophobic.

The texts to Michael Gruener were obtained by the Boston Globe and reportedly show Kalus calling him a “pathetic loser,” “Mr. Mom,” a “p**sy b*tch,” and a “bottom.”

Gruener and Kalus were involved in a dispute in which Gruener stopped work on a construction project of Kalus and her husband because he claimed he was not getting paid. Meanwhile, Kalus, along with the architect on the project, accused Gruener of unfair charges.

Gruener shared their text exchange with the Boston Globe. In addition to the messages listed above, they show Kalus telling Gruener, “I’ll make my money back in making you lose money in the future. You like being my little b**tch. Always adjusting your pants. Gross little b**tch.”

The Kalus campaign did not deny the text messages but rather defended them.

“What they show about Ashley is that she is a fighter,” said her spokesman Matt Hanrahan. “Rhode Islanders are strong, not meek, and they deserve a governor as tough as they are. Chicago is a rough and hard city. For Ashley to make it in business in Chicago as a woman, she could not tolerate being pushed around.”

“She stood up for herself, her family, and her business when it came to Michael Gruener. Ashley was successful in business because she was never afraid to stand up to those who attempted to take advantage of her or her family.”

Kalus herself also defended the texts during a radio appearance, as reported by WPRI.

“I will not be taken advantage of,” she said. “When I’m governor, nobody’s going to take advantage of the taxpayers either. This is unlike [my Democratic opponent, incumbent] Dan McKee, who has allowed that to happen for far too long.”

In regards to calling Gruener “Mr. Mom,” she said it was taken out of context but that she would “stand by my assessment of that person.”

She also claimed that when she referred to him as “a bottom,” she meant “bottom feeder” or “bottom of the barrel.”

“I mean, it’s being entirely mischaracterized,” she said. “To claim that it’s homophobic in any way is just wrong — I’ve always been an ally to the LGBTQ community.”

“[My two gay top aides] wouldn’t be working for me and with me day in and day out if there was even an ounce of homophobia in me that’s just not what I’m about.”

Let’s be real here for a minute.

Is this how she plans to talk to businesses and developers to bring them to RI?

Is this how she plans to negotiate with the GA to deliver a budget that helps RIers?

Is this how she plans to treat state employees?