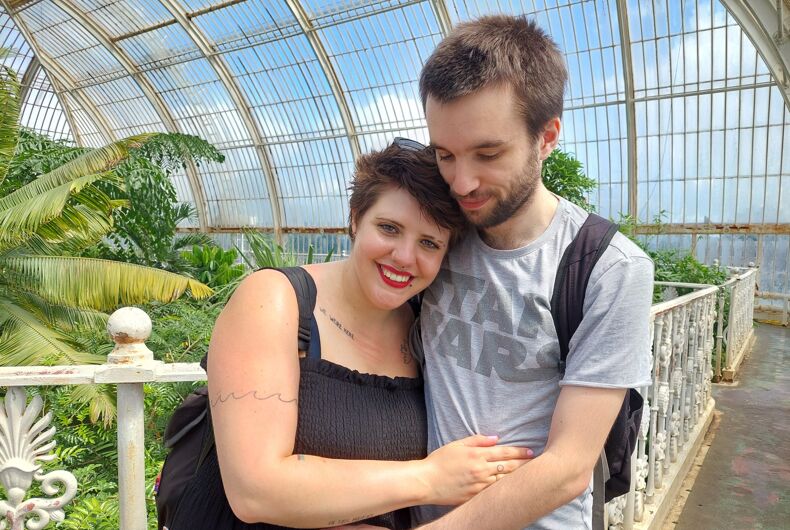 Bex, 25, started talking to their partner, Will, also 25, in November 2020 after they matched on Tinder. Due to the COVID-19 pandemic, neither was in the place in their lives they expected to be, as Bex moved home after university and Will also moved back in with his parents. Both had jobs in retail, with Bex on day shifts, Will on nights, and both in a real state of flux.

But, as they got to know one another, the chaos in their individual lives became somewhat irrelevant, as they were determined to make things work, despite needing to maintain a long-distance relationship.

It’s no secret that long-distance relationships aren’t easy, and they don’t always work out. Sure, they might seem exciting in those early stages, the thrill of traveling to see someone, the butterflies you get after not being together for a while… but it can wear off and become a slog, as you long to just have someone there whenever you call, rather than having to book a train ticket.

Long-distance relationships are perfect for some couples, sure, but they require a lot of work and commitment – something Bex and Will were prepared to give if it meant being together.

Bex – who identifies as bisexual and non-binary – explains how their and Will’s working patterns essentially meant they were operating in different time zones, but they tried to keep in contact as often as possible with messages, emails, and even letters.

“Due to our schedules, COVID-19, and not being in the immediate vicinity of each other, our first ‘date’ was over a video call, and it wasn’t until a month after we started talking that we first got to meet in person,” they say.

This was a long-distance relationship from the get-go, so the couple knew what they were heading into, but that didn’t calm Bex’s nerves the night before seeing Will in the flesh for the first time.

“With anyone else, I would have worried about it fizzling out before we finally got around to meeting – but we had so much to talk about that that was never on my mind. The night before we met, I was an absolute wreck – it all felt too good to be true, and I kept wondering what the catch was going to be, as well as worrying that things would be different in person.”

But, Bex’s worries never came to fruition, as the reality couldn’t have been more different.

When they met Will in person for the first time, everything just felt right.

“After that first meeting, we kept messaging and sending voice notes; I would get home from work as the rest of the city was waking up, and would take the dog for a walk while listening to the voice notes Will had sent me the day before. It was such a weird time, but also really incredible, and a period of my life I’m really thankful for.”

Fast-forward a few months, Bex and Will were smitten, describing the period as their relationship’s “honeymoon phase.” However, they were still reliant on texting and video calls, and, as the pandemic continued to rage, they had no idea when they were going to be together again.

“I couldn’t let myself believe that there would actually be a time we’d get to see each other again, as I didn’t want to get my hopes up,” Bex admits.

In the New Year, they both also started new jobs and moved cities. Fortunately, Will had his own place, making visits much easier once national lockdowns lifted.

They finally reunited in person in May once restrictions allowed, which Bex describes as feeling like “a million Christmases rolled into one.”

“From then on, we continued to video call twice a week and saw each other roughly once a month, alternating who would travel. The time we got together was often limited to weekends and never felt long enough. I did a lot of crying at train stations! But, as I said throughout, the only other alternative was to break up, and as the issue was how much I missed him, that was hardly a solution.”

Neither Bex nor Will was ready to relocate, so long-distance it was, and they just did what they could to make it a success until early 2022, when they decided they were ready to take the next step and move in together.

“Our lives were naturally heading towards a point where settling in the same city made sense, especially as I took on a stressful position at work and Will wanted to complete his Ph.D. We were aware that going from long-distance to residing in the same city would be a big adjustment, so we decided to find a place that had a spare room, so we could still have our own space should we choose.”

The lovebirds were living in a bubble, as they had reached the light at the end of the tunnel, with the other person never more than a few minutes away.

Fast-forward to now, Bex and Will have been living together for almost a month, after nearly 22 months of long-distance travel.

So, how did they make it work? Was it as easy as it sounds? Texting someone every now and again and video calling a couple of times a week? Absolutely not. But, with dedication and open communication, there’s always the potential for a long-distance relationship to blossom.

“We had to make sure we talked through how we were feeling, how we felt about the relationship, and what else was going on. We also checked in regularly about whether we felt long-distance was working, what was going well, and what could be better.”

Bex credits virtual date nights for bringing them closer together, as well as letting Will in as a support for their mental health disorders (OCD and anxiety). He was their rock and it was crucial he was aware of how the conditions might affect their relationship.

At this moment in time, they could not be happier, hanging out all the time, sharing mundane everyday tasks together, and no longer feeling like their lives are cut in half.

Bex initially really struggled with feeling like they never had their head in one place, as the time they spent together never felt long enough. Meeting in person can also feel rather intense, going from not seeing each other at all to wanting to make the most of every second, not to mention the convention of meeting family members and friends of your other half isn’t exactly done the usual way. Plus, sometimes, Bex just wanted a cuddle when the stresses of daily life became overwhelming. But Will was much further away than a cuddle would allow for.

That all being said, Bex is still determined to have their own life in a new city, despite the temptation to snuggle up to their favorite person all day long. Bex describes this drive for independence as “the foundation of a relationship that’s less likely to go wrong,” but fortunately, being long-distance for so long has given them the skills they need to craft their own identity outside of their romance.

So, can long-distance relationships work?

“I think my answer’s pretty clear: a resounding yes! But also, this kind of question can feel like our relationship is being devalued, intentional or not. Mine and Will’s relationship is no weaker or no more susceptible to failure than if we’d always lived round the corner from each other. At the end of the day, I’ve found my person! I get to share my life with my best friend, and our relationship is just as successful as any other.”