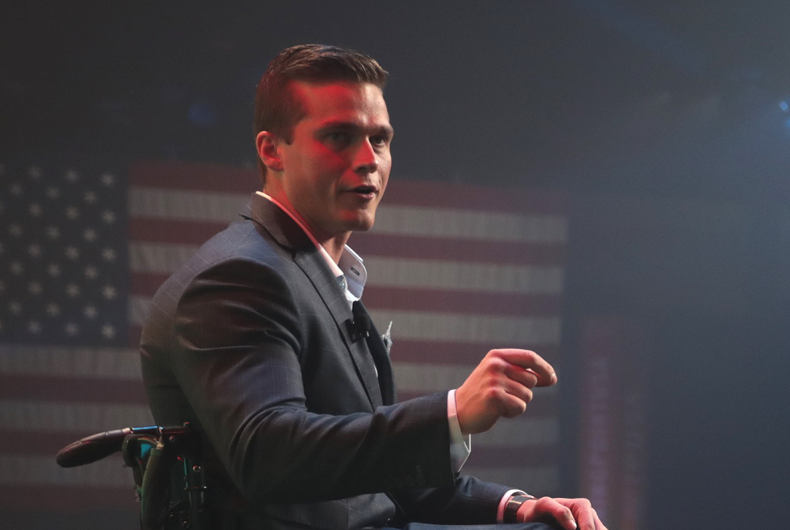 Rep. Madison Cawthorn (R-NC) made a rare appearance in Congress to give his farewell address. The 27-year-old lost his primary election earlier this year to Chuck Edwards, who went on to win the general election against out candidate Jasmine Beach-Ferrera.

“Our young men are taught that weakness is strength, that delicacy is desirable, and that being a soft metrosexual is more valuable than training the mind, body, and soul!” he said on the floor of the House of Representatives. “Social media has weakened us, siphoning our men of their will to fight.”

“Will you reclaim your masculinity?” he barked at the mic. “Will you become a man to be feared, to be respected, to be looked up to, or will you let this nation’s next generation be its final generation?”

Outgoing Rep. Madison Cawthorn (R-NC) rants on the House floor about men being taught to be a “soft metrosexual”:

“Will you reclaim your masculinity? Will you become a man to be feared, to be respected … or will you let this nation’s next generation be its final generation?” pic.twitter.com/FLTkahfmh9

Cawthorn made a name for himself as one of the most extreme Republicans in Congress ever since social media posts of him happily visiting Adolf Hitler’s vacation residence and calling the Nazi leader “the Fuhrer” were leaked shortly after he won the 2020 election. He was also caught lying about having been accepted to the U.S. Naval Academy.

Women who went to Patrick Henry College came forward and accused him of taking female students on “fun drives,” where he would drive recklessly and ask them intrusive questions about their sex lives.

In the months leading up to his primary election, embarrassing videos and photos of Cawthorn were leaked to the media, showing him in women’s lingerie, naked and humping a friend’s face, and having a staffer – who he said was his cousin – grab his genitalia in a car.

Cawthorn tried to respond to the various leaked images in a long, rambling video he posted to Twitter.

“You are witnessing one of the first examples of a politician who grew up with a cell phone in their hand,” he said in the video. “Most of my colleagues in Congress right now would not be serving in Washington if they grew up within a single mile of a cell phone growing up.”

Cawthorn is an anti-LGBTQ extremist, saying that he has “traditional views” when asked about marriage equality. He also opposed the Equality Act, which would add sexual orientation and gender identity to federal civil rights legislation, because he claimed that it would fund abortion and take away parents’ rights to prevent their transgender children from transitioning, neither of which is true.

Since losing his primary election, Cawthorn has made himself scarce at the Capitol. The Washington Post reported that he voted by proxy 86 times, allowing his allies – like Reps. Lauren Boebert (R-CO), Marjorie Taylor Greene (R-GA), Louie Gohmert (R-TX), and Matt Gaetz (R-FL) – vote in his stead. His website still describes him as married to Cristina Cawthorn even though they announced their divorce last December after less than a year of marriage.

“It is difficult to discern what Cawthorn has been doing for his constituents back in North Carolina’s 11th district,” the Washington Post reported last month, saying that his offices’ phone lines have a recording that says that they are “no longer regularly staffed.”

“He’s not anywhere to be found,” Michele Woodhouse, his congressional district’s former Republican chair, told the Post. “I don’t hear from anyone that there’s any great interest in what Madison Cawthorn is doing.”