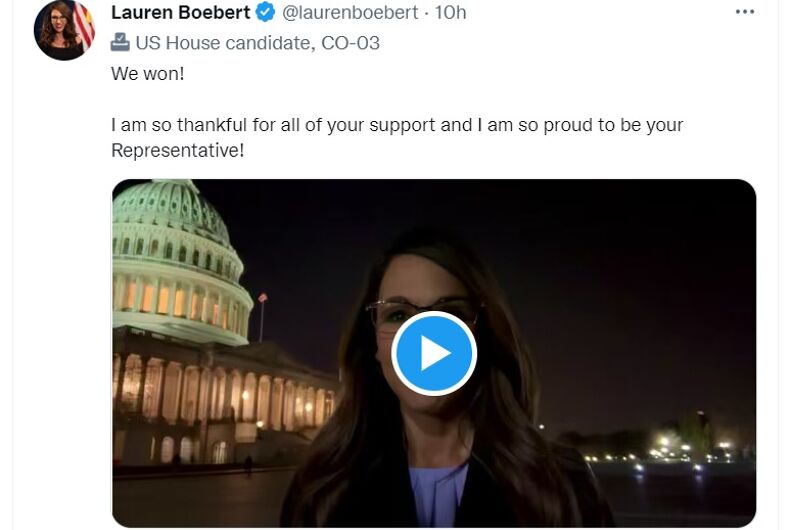 “We won!” Rep. Lauren Boebert (R-CO) declared on Twitter before she removed the tweet because it could still be weeks before the outcome of her election is known.

“It makes me so happy to announce ‘We have won this race!'” she said in a video attached to the tweet. “With this victory and with Republicans in control of the House of Representatives, we can focus on the issues that actually matter most,” she added, listing lowering inflation, reducing immigration, and stopping the Biden administration from doing things as examples of those issues.

But people looking for that victory message now will just find a message from Twitter that “This Tweet is unavailable.” The AP hasn’t called her race yet; she is a mere 551 votes ahead of Democratic challenger Adam Frisch with 99% of precincts reporting.

Also, Colorado state law requires a recount for any election where the second-place finisher received less than 0.5% fewer votes than the first-place finisher. Boebert has 166,758 votes so far and Frisch is fewer than 0.5% – or 818 votes – behind her.

A recount won’t be automatically triggered until at least November 30, and the recount itself would have to be finished by December 13, meaning that it could still be several weeks before she actually knows whether or not she won the election.

Boebert, one of the most conservative members of the House, was expected to have an easy path to victory in Colorado’s Third Congressional District, considering Donald Trump won the district by eight points in 2020. But the race has been much closer than expected after two years of her antics in Congress that turned off at least some independent voters in her district.

“I don’t like the way she behaves in Congress,” said 70-year-old Marilyn Morris of Pueblo, an unaffiliated voter, right before the election. “That is not respectful, and I wouldn’t vote for her for that reason alone.”

“She’s lying all the time, so I just don’t trust her.”

“I think Boebert is kind of crazy,” 59-year-old Richard Hirano of Craig said. “I just think she’s sometimes off the deep end. She sounds like she’s trying to push that we need to be ruled by religious belief.”

Respect for Marriage Act delayed until after Thanksgiving break in Senate