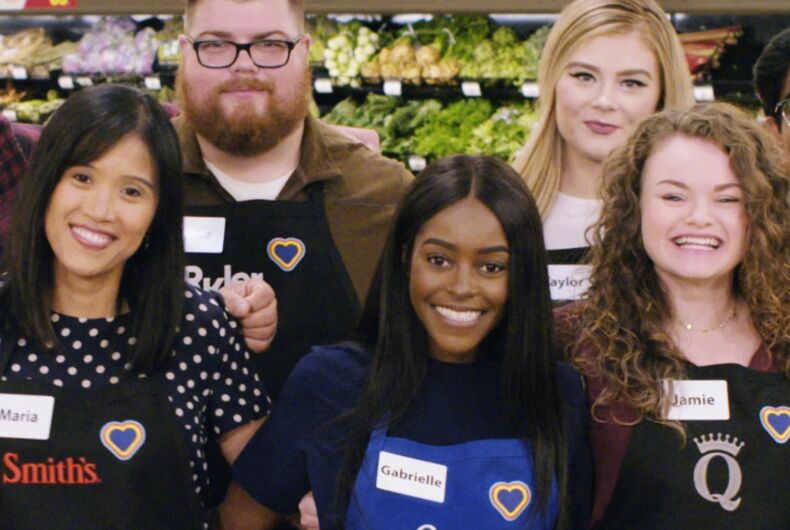 Kroger has agreed to pay $180,000 to two employees who claim they were fired because they refused to wear aprons with a logo they believed resembled the Pride flag.

A recent announcement from the EEOC said Kroger has agreed to pay the settlement and also that the location where Rickerd and Lawson worked would “create a religious accommodation policy and provide enhanced religious discrimination training to store manage­ment.”

Lawson and Rickerd worked at the Kroger in Conway, Arkansas and claimed they faced retaliation when they complained about a rainbow heart on the new aprons issued by their employer in April 2019.

But the heart wasn’t quite rainbow.

Pictures of the uniform available online showed that the heart was blue with yellow and red lines around it. Not only were half of the Pride flag’s colors missing, but the colors also didn’t appear in equal amounts, were surrounded by sky blue, and didn’t evoke Pride at all.

But it was still too much for Lawson and Rickerd, who said at the time that they were Christians with a “literal interpretation of the Bible” and they believed “the practices of that [LGBTQ] community” are a sin.

Both of the employees complained to Kroger about the uniform and were eventually fired.

They believe that Kroger targeted them because they spoke out against the rainbow and because other employees who covered it up with their name tag or just didn’t wear the apron weren’t fired.

The EEOC – chaired when the suit began by Trump appointee Janet Dhillon – argued that Kroger violated the Civil Rights Act of 1964’s prohibition on discrimination on the basis of religion.

The lawsuit asked for back pay and other compensation, and also asked the federal court to order Kroger to create better employment policies.

According to NBC News, court filings show that Kroger claimed it did not fire the employees due to their religious beliefs and also said the uniforms were not designed to communicate support for LGBTQ people.

But at the time, an anonymous employee at the Conway store submitted a complaint claiming that there was “a[n anti-LGBTQ] culture of bigotry and hate” there. Court filings also showed that many of the employees who did not want to sport the uniforms were rattled by the fact that the same year, Kroger celebrated that the Human Rights Campaign rated the national company one of the best places to work for LGBTQ equality.

The settlement was reportedly signed off by district court Judge Lee Rudofsky, a Trump appointee.

Just a few weeks ago, during a school board debate in Conway over trans rights, a speaker declared that LGBTQ students “deserve death.”

At the meeting, the board voted to force trans students to use bathrooms based on their sex assigned at birth (or else a single occupancy space), decided that roommates for overnight hotel stays on school trips would also be based on sex assigned at birth, and banned two books from schools that feature trans characters.