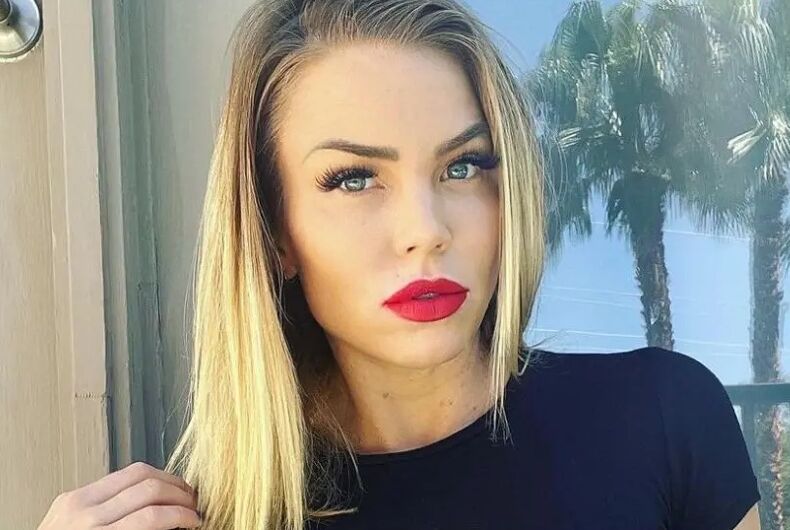 A woman who was raised in the anti-LGBTQ Westboro Baptist Church has since left the church, joined OnlyFans, gained millions of social media followers, and is now known as “The world’s hottest nurse.”

The Westboro Baptist Church is a Kansas-based hate church infamous for displaying “God Hates F**s” signs at funerals. Lauren Drain, now 36, said that her father brought her family into the church when she was barely 14 years old.

After the September 11 terrorist attacks on the World Trade Center, the then 15-year-old Drain began attending church protests and watching her fellow congregants hold signs that said, “Thank God for 9/11” while others burned upside-down U.S. flags.

“That was one of the moments when I felt really uncomfortable,” she told Chicago’s Ideas Week. “That’s not who I wanted to be like…. I was scared to do it. I was ashamed to do it. That’s what I was representing: tearing this nation apart.”

Though she now refers to the hate group as a cult, Drain said that as a young teen, the church’s extreme beliefs and expectations made her think that she had to display such signs to be a good Christian and to make her Christian family proud.

“I was being inundated with this religion, and I kind of just had to assimilate to it,” she said. “I wanted it to be right.”

At first, it didn’t occur to her that the signs might offend or deeply hurt people. She said that the church spent so much time judging and condemning the actions of its own members, that it seemed only natural to judge and condemn the outside world too.

However, after the church’s September 11 protests, she began to question the its hateful ways and its constant condemnation of others to hell for their sins.

Over time, she said, she noticed the church getting even more extreme in its private beliefs. When the church told its members not to celebrate holidays or marriages any longer, she realized the church wasn’t interested in answering her questions about faith — it merely wanted to control other people’s lives.

“As cruel as they look in the media, they’re 10 times more cruel to their own members,” she said.

The church initially made her feel welcome, but when she began questioning it, she said its members began acting hatefully toward her, telling her that God would doom her to a horrible marriage and deadly diseases.

By age 21, the church had banished her after holding a secret proceeding where its eldest members voted her out. Her own father informed her of her banishment, saying that she was an evil influence on her younger siblings and wouldn’t be allowed to talk to them for the rest of her life. The news devastated her.

But after facing up to the hatred she endured and its effects on her, she moved to Connecticut, became a nurse, began working out at CrossFit, and eventually got her own condo, a dog, and a fiancé.

Though she misses her brother Bo and her sisters Taylor and Faith, she said, “It was absolutely the best thing for me and I would never go back.”

She recently told the British tabloid The Sun that she felt called to nursing because her sister Taylor “had cancer as a baby when she was not even one yet.

“Taylor’s doctor was a nurse practitioner, who I believe helped save her life,” Drain told the publication. “Nursing is a highly rewarding profession when you get to help save lives and families recover.”

On those platforms, she shares her life experiences, diet and fitness tips, and posts photos of her muscular physique clad in tight, revealing clothes and bikinis. The pics led The Sun to call her, “The world’s hottest nurse.”

Drain eventually shared her tale in her memoir Banished: Surviving My Years in the Westboro Baptist Church. The church’s profile has declined in recent years as its own brand of Christian queerphobia has become more mainstream among other hateful congregations and far-right Republican figures.