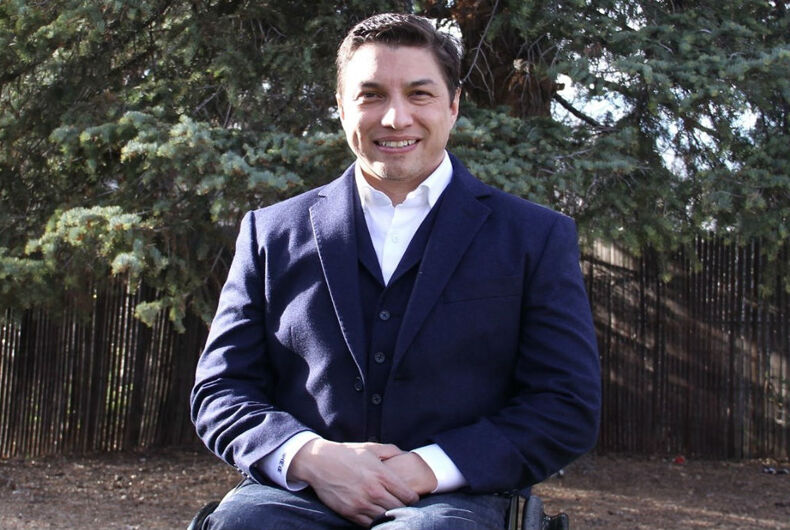 Colorado state Rep. David Ortiz (D) is the first out bisexual candidate and the first wheelchair-user elected to his state’s legislature. A former U.S. military helicopter pilot, he survived a crash while serving in Afghanistan that paralyzed him from the waist down, ending his military career. He has since found a new calling as an advocate for disabled people, veterans, houseless people, public school students, and LGBTQ equality.

David Ortiz At a Glance

Ortiz was born in Rapid City, South Dakota in 1982. After graduating with a B.A. from St. Thomas University, he worked with Catholic charities in the Galveston-Houston area to help resettle Hurricane Katrina evacuees.

He then enlisted in the army and attended warrant officer training and flight school. There, he became a Kiowa Warrior helicopter pilot. He later survived a 2012 accident in Afghanistan that made him a wheelchair user.

After recovering at the Craig Hospital for spinal cord injuries in Colorado, he became a lobbyist for the United Veterans Committee, focusing on veterans issues and behavioral health issues.

Though Ortiz has predominantly focused on veteran healthcare, climate change, and other issues affecting Coloradans, he is also a member of the Colorado Legislative LGBTQ Caucus.

He told Yahoo! News that he wants the LGBTQ community to “make sure that we’re fighting for greater representation even within [our] community, and greater support, and greater rights.”

In June 2022, when the U.S. Supreme Court overturned the right to legalized abortions (and conservative Justice Clarence Thomas wrote that legalized same-sex marriage might also be overturned in the future), Ortiz said, “(I) fought religious fanatics in Afghanistan that wanted to control women and girls, only to come home to religious fanatics successfully doing the same here.”

In a June 24, 2022 tweet, Ortiz wrote, “They will be coming for marriage equality next and possibly contraception. Rest of us that put our country before individual religious beliefs will keep working to depoliticized the Supreme Court and try and restore integrity and honor to that institution.”

“You don’t become gay or bi because you were taught about leaders and who they were or from reading a book. Not how that works,” he wrote in one tweet. “But you do feel seen and accepted when you see yourself reflected OR you become a decent human being by seeing the other as human too.”

In another tweet, he wrote, “No one is trying to force identity. Parents do lead raising kids. Educators are partners in that. They shouldn’t shy from teaching diversity of leaders, scientists, and war fighters. Allen Touring, gay man that broke German code for example.”

In 2021, Ortiz voted in favor of an anti-bullying bill requiring schools to annually report incidents of bullying and anti-bullying efforts.

That same year, he also voted in favor of a law that amended state hate crime statutes to include a person’s actual or perceived sexual orientation.

In February 2021, Ortiz introduced the “Restoration of Honor Act” which would expand state military benefits to veterans who received other-than-honorable discharges from service due to their LGBTQ identity.

Ortiz said that he has a transgender cousin who inspired him to come out after he saw her coming out to her own family.

David Ortiz is a bisexual person living with a disability who has a demonstrated history of advocating for accessibility, fairness, mental health, healthcare, and LGBTQ rights.

LGBTQ people are vastly underrepresented in elected office. Here’s how that could change