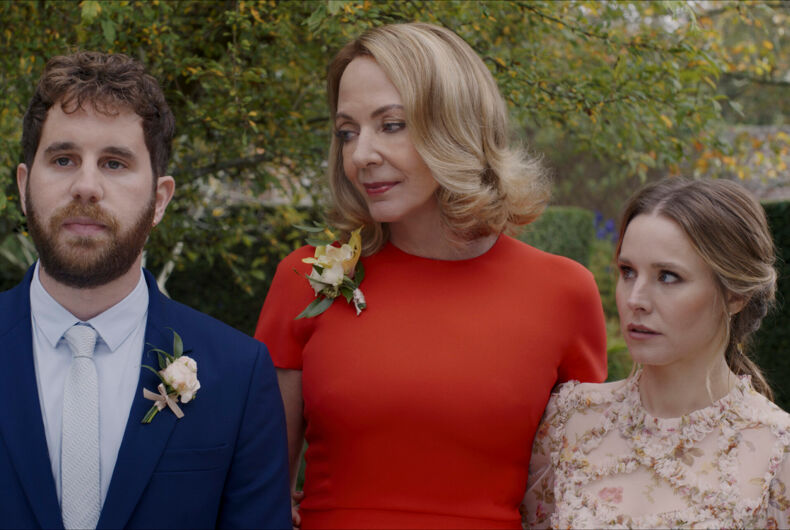 Ben Platt, Allison Janney, and Kristen Bell in 'The People We Hate at the Wedding'Photo: Courtesy of Amazon Studios

Gay rom-coms are having a bit of a moment recently, with Fire Island and Bros making headlines and getting solid praise from critics already this year. Into this cinematic—and streaming—landscape comes The People We Hate at the Wedding. Based on out author Grand Ginder’s 2016 novel is what you might call “gay-adjacent.”

The film concerns a pair of cynical American siblings who head to London with their mother (Allison Janney) for the wedding of their wealthy and much-resented half-sister (Cynthia Addai-Robinson). It should probably go without saying that hijinks ensue for Alice (Kristen Bell) and gay brother Paul (Ben Platt).

Based on the trailer, the film, which debuts on Prime Video today, seems like a perfectly enjoyable comedy for a night on the couch, the kind of thing that pairs well with a decent supermarket Chardonnay. But critics have been decidedly mixed on The People We Hate at the Wedding.

In a review for The New York Times, Beandra July praised the film’s casting director for assembling a stellar group of actors to “add luster to a comedically uneven but serviceable script from the sisters Lizzie Molyneux-Logelin and Wendy Molyneux.”

“Underneath the plentiful high jinks in its physical-comedy-heavy scenes, The People We Hate at the Wedding ends up being a poignant enough good time that celebrates imperfect yet endearing familial love,” July concludes.

The Hollywood Reporter’s Lovia Gyarkye was similarly charmed, if underwhelmed, by the film. “The People We Hate at the Wedding doesn’t stray too far from the formula of our streaming-dominated visual landscape, but a witty screenplay from the Molyneux sisters and strong performances from Janney, Platt, and Bell make it reliably diverting,” Gyarkye writes. “The movie keeps you entertained, if not totally satisfied.”

Others were not so kind, however. “That a film with so many batshit moments (a menage a trois, a mid-wedding arrest, people pissing on one another) can be so uninteresting speaks to how unsympathetic the characters are,” writes AV Club’s Matthew Huff in a blisteringly negative review. “As with a bad wedding toast, The People We Hate At The Wedding is nearly devoid of laughs, fails to convey sincere emotion to those watching, and goes on too long.

Variety’s Guy Lodge was less harsh, writing that the film “attempts to bring a faintly risqué, expletive-laden millennial sensibility to Nancy Meyers terrain, and never quite finds the sweet spot.”

“Sporting a game cast and efficient sitcommy pacing, it looks and sounds the part just enough to keep you diverted — until you notice, as the credits roll to upbeat electropop, that you haven’t laughed once,” Lodge writes.

In a one-star review for The Guardian, critic Peter Bradshaw echoes Lodge’s assessment down to categorizing The People We Hate at the Wedding as a “non-romcom.”

“It’s pretty much a laugh-free film to make you appreciate the work of Nancy Meyers or Richard Curtis,” Bradshaw writes. “Their films may look easy or corny but they have something this doesn’t, a kind of buoyancy or a way of alchemizing all the luxury tourist incidentals into something entertaining.