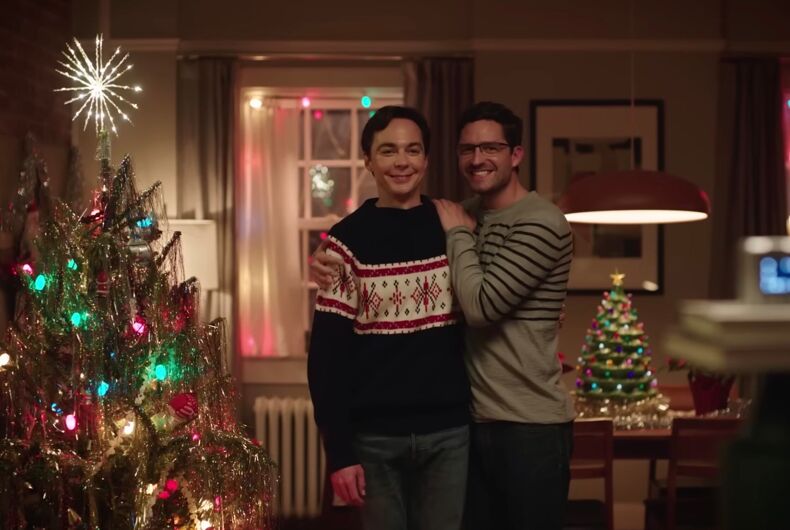 Spoiler Alert, which opens December 2, is a rare gay dramedy; a tear-jerker in the vein of Steel Magnolias, Terms of Endearment, and Love Story.

Based on TV journalist Michael Ausiello’s 2017 memoir, Spoiler Alert: The Hero Dies, the film depicts Ausiello’s (Jim Parsons) 13-year relationship with photographer Kit Cowan (Ben Aldridge). The story takes viewers through all their ups and downs until Kit’s eventual diagnosis with a rare and aggressive form of cancer and his untimely death in 2015. During a recent press screening in New York, I can personally attest that the film brought more than one film critic to tears.

So now that the tears have dried and the reviews have been published, let’s see what critics are saying about Spoiler Alert.

More than one review compared Spoiler Alert unfavorably to Ausiello’s book. Variety’s Peter Debruge called the film “a strangely, stubbornly conventional treatment” of the source material, writing that director Michael Showalter (The Big Sick, The Eyes of Tammy Faye) “should have committed more to the postmodern approach.”

Still, he praised the film for its depiction of a mature relationship and its handling of Michael’s body image issues. “The monumental shift in gay acceptance of the past 20 years has happened alongside the explosion of pornography, which amplifies body shame and confidence issues for so many,” he wrote. “‘Spoiler Alert’ is one of the only films to confront the toll this is taking.”

In a fairly scathing review, IndieWire’s David Ehrlich called the film “a weirdly generic seriocomic weepy that betrays the fact it wasn’t scripted by Ausiello himself at almost every turn.” He criticized David Marshall Grant and Dan Savage’s “standard-issue screenplay” for lacking the specificity of Ausiello’s book and Showalter’s “unfussy,” “anonymous” direction. “It made me cry at the end,” Ehrlich writes, “but my tears were as canned and untrustworthy as the sound of a sitcom laugh track.”

AV Club’s Manuel Betancourt, on the other hand, wrote that Grant and Savage’s script “sneaks in often quite nuanced takes on gay male intimacy and the scars the closet has [left] on these two otherwise well-adjusted gay professionals.”

But Betancourt felt that the film’s gimmicks – like depicting flashbacks to Michael’s childhood in the style of a cheesy 80s sitcom – shortchanged its emotional impact. “But perhaps all these missteps are what help make Spoiler Alert feel so ruggedly endearing,” wrote Betancourt. “When the film lets its guard down—namely, whenever Aldridge gets to deploy his charm as Kit or manages to let [Sally] Field echo a weathered kind of Steel Magnolias screen presence—the film sings.”

“Spoiler Alert is about as funny and upbeat a film [as] you could possibly make when the subject is the illness and death of one of the partners in the central relationship,” wrote Deadline’s Todd McCarthy. “The film challenges itself to be both amusing and emotionally involving where matters of life and death are concerned. Fortunately, it manages to more or less succeed on both counts due to its ever-ready wise-crack nature and sympathetic direction.”

Writing for The Hollywood Reporter, reviewer David Rooney raised the specter of another high-profile gay film. “While box office pundits had a range of opinions about the commercial failure of the Billy Eichner vehicle Bros a couple months back, the general view was that the gay rom-com under-performed even within its core demographic. Spoiler Alert potentially has a shot at appeal beyond that niche, particularly with audiences starved for a genuinely moving, pleasingly old-fashioned four-hankie tearjerker whose sentiments are backed by lived experience,” he wrote. “This is a well-acted movie with far more authentic feeling than mawkishness; it provides a welcome reminder that there’s nothing quite so emotionally cathartic as a good cry.”

Five key steps to help you navigate your caregiving journey