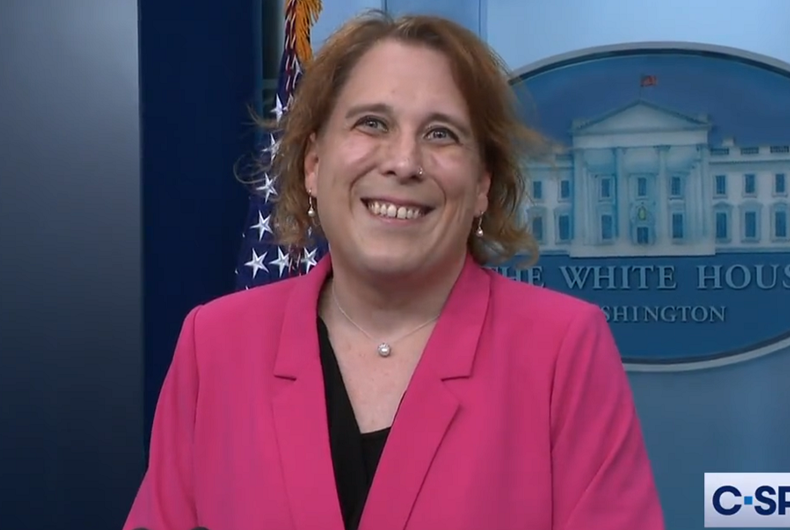 Trans Jeopardy! champion Amy Schneider testified before Ohio lawmakers this morning against a bill that would block transgender youth from accessing gender-affirming medical care and require teachers to out trans kids to their unaccepting parents.

Schneider, an Ohio native, said that without gender-affirming health care “I don’t know that I could go on living. I hope that I would and I’d hope that I’d find a way to do it but I really believe that I might not survive.”

“It’s as if from the moment I was born there was this quiet alarm going on in the back of my head, danger, danger, clang, clang, clang all the time,” she continued.

“And after decades of living with that agony, I came out as trans and I began receiving gender-affirming care and for the first time in my life that alarm went silent and I knew peace and quiet for the first time.”

She said trans kids in Ohio who have received gender-affirming care “have achieved that same peace.”

“Please, don’t take that away from them. Please don’t force them to go back to that constant feeling of wrongness and danger. I’m not asking anyone here to change your personal views on trans people. I’m not here to scold anyone about pronouns. I’m not asking you to do anything except to not pass a ban that is expanding the government’s reach, not restrict the freedom of families and doctors and communities to decide for themselves what their children need without a bunch of politicians in Columbus sticking their nose into everyone’s private business.”

"After decades of living with agony, I came out as trans and I began receiving gender-affirming care, and… I knew peace and quiet for the first time." pic.twitter.com/wQlhGO5Kgr

After testifying, Schneider told reporters that there is no reason trans rights should be a partisan issue.

I just finished testifying against SB 454 in Columbus. Thanks to @EqualityOhio for asking me here; whatever the outcome of this bill, I’m glad to have had the chance to stand up for the safety of trans youth pic.twitter.com/RMAba4DKuw

The bill — H.B. 454 or the “Save Adolescents from Experimentation (SAFE) Act” — would outlaw the use of puberty blockers, hormones, and gender-reassignment surgical procedures on children under 18. It would forbid government funds or health insurance coverage from going toward individuals or organizations facilitating such care. It would also allow medical providers to be sued or face professional discipline for providing such care.

Additionally, the bill forbids teachers from withholding “from a minor’s parent or legal guardian information related to [a] minor’s perception that his or her gender is inconsistent with his or her sex,” forcing teachers to out students they suspect of being trans or non-binary.

The bill is based on the idea that medical professionals are pushing transitional treatments upon gender non-conforming kids who’ve been peer-pressured into so-called “rapid onset gender dysphoria.” But no studies indicate that this is happening, and there’s a big difference between gender non-conforming kids and trans ones. Namely, trans kids consistently and persistently insist that they are trans.

“The risks of gender transition procedures far outweigh any benefit,” the legislation claims, even though numerous studies have shown that gender-affirming care reduces suicides and mental distress among trans youth.

Transgender young people who spoke with The Columbus Dispatch reported feeling frustrated over waiting for puberty blockers while their bodies change in undesirable ways. Even if a trans teen sees a mental health professional and is diagnosed with depression, anxiety, and gender dysphoria, this proposed law would force them to wait before receiving any gender-affirming treatment.

While the legislature seeks to ban gender-affirming care for young Ohioans, the state board of education is also currently debating whether trans students deserve discrimination protections under Title IX.

Speeches by cis ally Alex Gunter, who became known as “the trans shirt guy” after speaking out for trans rights at a previous board meeting, made a powerful speech declaring that trans people deserve to feel safe.

I had to cut his speech down for twitter but WOW. Alex Gunter “the trans shirt guy” shows everyone how a cis ally can stand up for trans rights. I am so proud to have him on our side fighting in Ohio.

Can Ogden just testified to the Ohio Board of Education, which will shortly be voting on a resolution that “sex is biological reality” and urging the legislature to deny title 9 rights to all trans students.

Her speech was amazing.

This must not pass! pic.twitter.com/vn5l6naZIJ