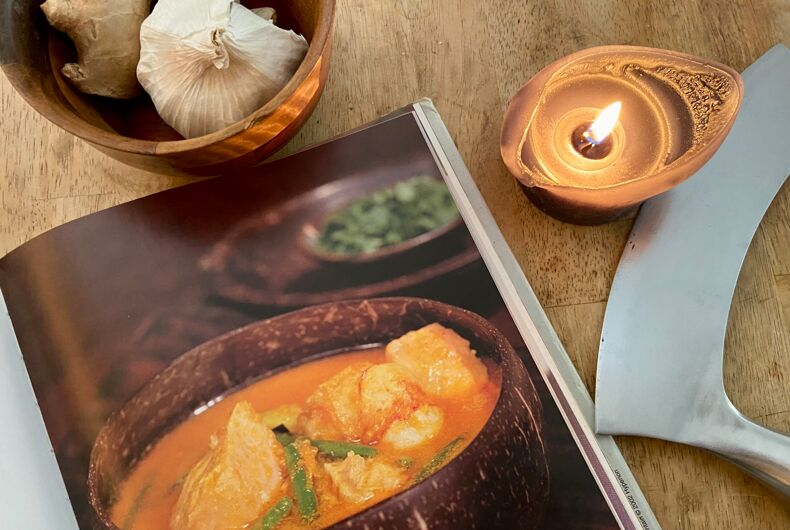 Most holidays—those that have their roots in religious festivals and things like that—tend to have specific foods associated with them. Turkey and all the trimmings at Thanksgiving; ham (or also turkey) at Christmas; black-eyed peas and other vaguely coin-shaped foods at New Year’s; lamb (or also ham) and eggs and hot cross buns at Easter. And these are just the big, obvious, vaguely secularized American holidays. And I suppose Halloween has its associated “foods” as well: candy corn, caramel apples, all manner of fun-size chocolate bars. Candy, generally—if you consider that “food,” which…eeeeh?

But actually, for the last few years, as October 31 approaches and the leaves change and the temperature dips, I’ve found myself gravitating to a seasonal type of cooking that I’ve come to think of as “cauldron cooking.” Warming, hearty things you can put in a big pot or pan and let bubble away on the stove. Stews, basically, but also soups and hot drinks.

Groundbreaking, right? But while the food itself, the style of cooking, may not be particularly original for this time of year, what I’m suggesting is more a state of mind, a mood, a vibe in keeping with and enhancing what I guess we’re all calling “Spooky Season” now. For my part, I still think of October as the Season of the Witch, and in case the term itself didn’t tip you off, that is the vibe I’m aiming for with cauldron cooking.

You know what else witches do? They make potions, follow recipes, they cook.

What I love to do this time of year, is light some candles, maybe put on a huge flowy black silk robe, and cook something in a big pot. Bonus points if it’s one of those Columbian black clay La Chamba pots that look like cauldrons, but a big black Le Creuset dutch oven totally works. Double double toil and trouble/Fire burn and cauldron bubble, as they say.

That’s the vibe part. As for the food itself, you can keep the toiling part, actually, because the thing about cauldron cooking is it should be loose, unstructured. Every recipe for a stew I’ve ever bothered with says something like, “this should just be a loose framework,” and all the measurements are caveated with “to taste.” Yes, having a big book of recipes open in front of you certainly evokes a book of spells—it has to be big and hardback; everyone knows that’s what spell books look like. But you should also feel confident enough to deviate, to trust your witchy intuition—not to mention your tastebuds—to know what’s needed in your pot and how much of it.

To me, the best cauldron recipes have lots of ingredients for you to drop in, one by one, maybe saying some magic words to yourself as you do. And they take time to cook, bubbling away on the hob and transforming as they do. Think of the way livid red chunks of meat will darken and kind of disintegrate into a chili after hours on the stove; the way flavors meld and deepen.

My go-to recipe for a cozy, at-home Halloween supper comes from Nigella Lawson’s 2001 book, Nigella Bites. It’s a pumpkin and seafood curry—the pumpkin feeling particularly seasonally appropriate. It calls for salmon and shrimp, but I’ll usually leave one or the other out and replace the specified bok choy with fresh green beans; occasionally, I’ll add chickpeas.

Chicken cacciatore is another fave that requires a big pot and an extended cooking time. My Italian grandmother—who, I have to admit, never appreciated it when I referred to her as a strega—would just dump cans of diced tomatoes over browned chicken pieces with Italian seasoning. I do still work from that blueprint but tend to add a splash of vermouth to the chicken as it browns in garlic oil. I replace the Italian seasoning mix with lots of dried oregano and almost always add cannellini beans.

Where my Nan used breasts, I refuse to use any part of the bird but the thighs, and these must include the bone. For flavor, obviously, but also after several hours, the meat falls away and you have a simmering pot filled with bones, which adds the essential cauldron cooking creep factor. But I do honor my Nan by always eating this over rice—not that I’m trying to evoke that scene in The Lost Boys when Kiefer Sutherland turns a tub of rice into maggots or anything!

A simple pasta sauce can also provide the cauldron vibes. My recipe gets its added witchy imprimatur from its source: one of the characters in John Updike’s novel The Witches of Eastwick. At the beginning of the novel, Alexandra—the character played by Cher in the movie—is making tomato sauce: tomatoes from her own garden sliced and fed to the blender, no onions, two garlic cloves minced and sauteed for three minutes (“no more, no less; that was the magic”), plenty of sugar, a single grated carrot, more pepper than salt, a teaspoon of dried basil (to “cater to virility”), and a dash of belladonna (which “provided the release without which virility is merely a murderous congestion”). I use that loose formula, with maybe a bit more basil and omitting the belladonna, a.k.a. deadly nightshade, which, as far as I can tell, is extremely toxic. Simple campy kitchen witchery has its limits!

A tomato sauce may seem, at first, too pedestrian to be considered especially witchy, but even a tomato sauce transforms rather miraculously, its discrete parts taking time to amalgamate into something entirely different.

But really, any stew or sauce or noodle soup, even, can provide the cauldron cooking vibe. Pour some stock into a pot and drop things into it. Hell, even a spiked apple cider or mulled wine, brewed with twigs and things (a.k.a. cinnamon, cloves, star anise) and a dash of your spirit of choice at the end, can do the trick. Cooking, after all, is alchemy.

It’s also magical that eating or drinking something can change your mood. Like a potion.