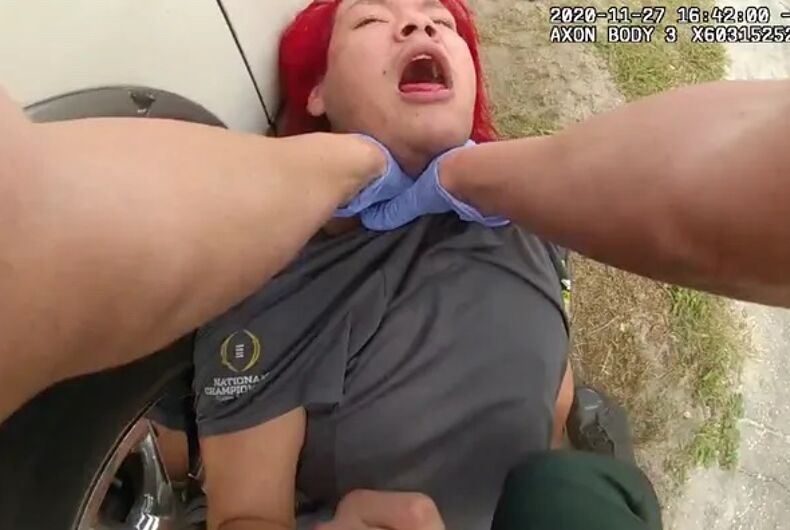 A Florida sheriff’s office has cleared an officer of wrongdoing after he was caught on a body camera footage choking a Guatemalan transgender woman and calling her “it.”

In November 2020, Sean Bush, a deputy from the Hillsborough County Sheriff’s Office (HCSO), said that a then-24-year-old trans woman named Jenny DeLeon had provoked his forceful arrest after she allegedly grabbed him by the wrist and knocked him off balance while he investigated a domestic disturbance on her property.

The November 2020 body cam video shows DeLeon greeting Bush with a fist bump and then refusing Bush’s instruction for her to sit down. DeLeon then says that no one in the home called for him to come and asked Bush to go back to his patrol car. Soon after, she asks Bush to please stay six feet away due to COVID-19 concerns. She then tells the officer, “You’re so awesome. Thank you for your service.”

However, when Bush moves towards her car, DeLeon raises her arm and asks him not to touch the vehicle because of fears of possible COVID-19 transmission. Such transmissions are rare, according to the U.S. Centers for Disease Control and Prevention (CDC).

Bush then says, “Don’t touch me,” before grabbing the woman’s arm, shirt, and neck and pushing her to the ground in a chokehold. Bush then pulls out his stun gun as DeLeon says, “I’m epileptic!” Bush uses the stun gun on her, even though stun guns can trigger seizures in epileptic people.

Later on, he grabs her by the throat again and then shoves her into some plants before using the stun gun on her again. He then rolls her onto her stomach and began handcuffing her.

As two other deputies arrived, Bush tells them, “Just keep whatever it is down,” referring to DeLeon as an “it,” a dehumanizing transphobic slur.

After the HCSO received a complaint about Bush’s use of force and a slur, the office conducted an investigation which began on December 2, 2020. The investigation ended one month later, and by March 2021, the HCSO sent Bush a letter saying that it found neither evidence of “excessive or unnecessary force,” nor of Bush making derogatory remarks. It also called Bush’s chokehold “brief and unintentional.”

In a statement issued last week, HCSO wrote, “Following review of body-worn camera video… it was determined that … the suspect continuously refused to follow commands on scene and was physically combative with the deputy…. The deputy unintentionally briefly used techniques that are not in line with HCSO’s procedures.”

After her interaction with Bush, DeLeon was charged with battery, battery on a law enforcement officer, depriving an officer of means of protection or communication, and resisting an officer with violence. She was sentenced to 30 days in jail.

One year later, DeLeon was fatally stabbed. A 40-year-old man named Damien Marshall has been arrested in connection to her murder. Marshall said he slept with DeLeon but denied killing her.

“You see the video; what they said happened compared to what actually happened is not true,” Viker told The Huffington Post in a statement. “The video is the best representation of what actually occurred. Videos don’t lie.”

Viker isn’t representing DeLeon’s family members. It’s unclear if the family will take any actions in response to the newly uncovered video.

LGBTQ studies programs exist because of fierce student activism. Here’s how it all began.

Joe Biden takes a swing at trans health care bans: “No state should be able to do that”