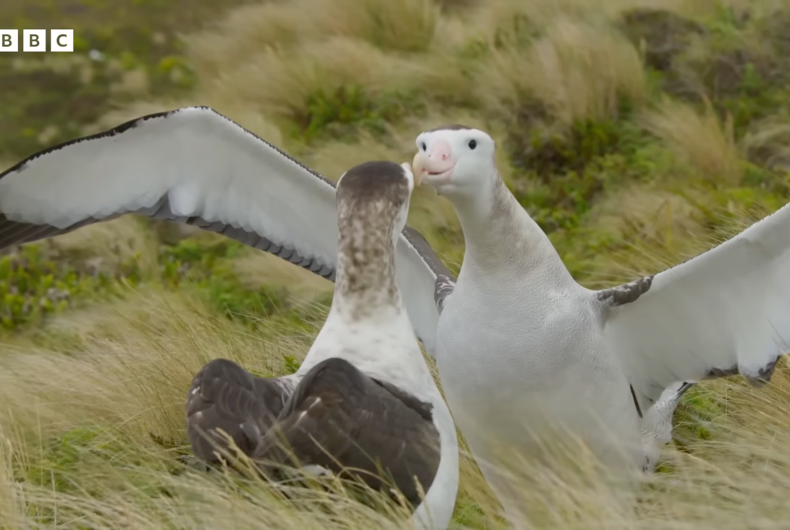 One of the great albatrosses of the genus Diomedea, males grow to nearly four feet long with a wingspan of almost ten feet. They typically live 50 years. With a pink beak, pink wide-webbed feet, and small black eyes, the birds are already adorable before the mating rituals begin. Then things get really cute.

“In spring,” Attenborough intones, “the longer days turn every speck of land into a potential breeding ground.”

We meet the 14 year-old as he calls out to a female in flight, who lands just feet away. “It seems to be working,” says Attenborough.

“The finale is the great decider: synchronized wing spreading,” he continues, but then another male appears, skulking in and spreading his own wide wings, accompanied by a delirious scream. The 14 year-old is cuck’d.

“It seems,” say Attenborough, “this is not going to be his year.”

But the kid catches another albatross’s small round eyes, who flies in for a closer look and alights. The courtship display resumes.

It makes no never mind, and the bird “continues to demonstrate his eligibility.” The pair cross pink peaks and stare lovingly into one another’s small eyes. The music swells.

“This could still be the one with whom he shares the rest of his life.”

It’s an increasingly common occurrence in the Antipodes Islands, where males now outnumber females 3-1. Feeding grounds north of the chain, where females typically forage, are busy industrial fishing areas and the birds get trapped and killed in nets. “As a result, the female albatross here is declining fast.”

Males are left with fewer potential female partners, then, and those that don’t pair up with their smaller, darker members of the opposite sex can fly solo or join with another male in similar circumstances. As the 14 year-old sits feet tucked across from his potential partner-for-life, it seems to be a happy, if necessary, alternative.

One British viewer’s tweet was typical of the conflicting emotions surrounding the beautiful moment.