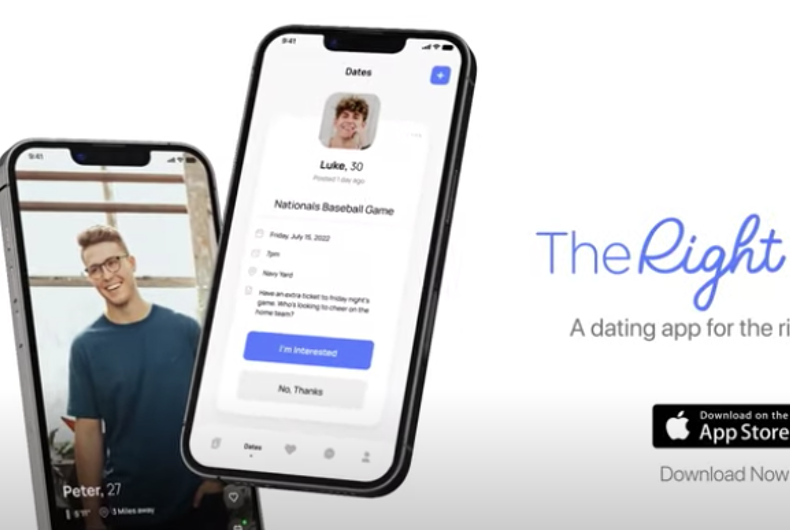 The Right Stuff, a dating app for conservatives, just launched. Reviewers say it’s difficult to join, overrun by men, and may have caused FBI agents to visit users’ homes.

An app spokesperson told the fact-checker site Snopes that it isn’t overrun by men. They also said no FBI visits have resulted from members signing up. Even though the app is available for download, it hasn’t officially opened for public use. The app spokesperson said its current members are 70 percent female, but they published no data to back up their claim.

Nevertheless, negative reviews for the app have appeared on Apple’s website. (The app isn’t yet available on Google devices.) Many of the reviews are likely from trolls.

“It’s a good app but there’s no women?” one reviewer named Douglas Roop wrote. He added, “I tried switching my preference to men … and loads of handsome men came up. I hope the developers fix this.”

Another reviewer named Alutz3 wrote, “I guess it’s just men, then. Ok by me! Gay men: plenty of fish here.”

Such reviews may exist purely to turn off women since the app’s advertising has focused solely on women. A pre-launch ad featured young, allegedly conservative women discussing how they wanted to date masculine, non-Democratic men with “shared values,” an “alpha male vibe,” and a desire to visit the women’s families.

In truth, gay men would probably dislike the app because it doesn’t allow same-sex matches. This also means that gay conservative billionaire backer Peter Thiel — who sunk $1.5 million into the project — wouldn’t be able to use the app. The Right Stuff said it may allow same-sex matches in the future, which is odd considering that the national Republican party platform considers same-sex marriage “an assault on the foundations of our society.”

The app’s developers have also made it annoyingly difficult to join, according to some of the more legitimate-sounding reviews.

After making users fill out their entire profile — including their “favorite liberal lie” and thoughts on January 6, 2021 U.S. Capitol riots — the app informs users that they can only join if they’ve been given an official invite from another member. Either that or the new user is asked to have three friends to download the app.

“What??? Ok interface okay interface but violates my privacy. Way too many personal questions, I don’t want to give out my phone number so can’t sign up. Stupid to have to be invited unless you refer 3 other people, who will join?” DeeSF wrote.

“I have heard there are no women on the site and the ad shows hot conservative women but there aren’t any. Get rid of the January 6 question, have you seen all the men at January 6? Duh,” DeeSF’s review continues. “Liberal websites don’t ask for so much personal info, be better and respect my privacy. Why so many personal questions and invite only? Stupid.”

Several reviewers even claimed that the FBI or police officers showed up at their homes after they joined the app.

“Okay app asks about January 6th, harmless, right? I said I was there because I was, I’m a patriot that’s why I’m on this dating app. I use this app for hardly an evening and is it a coincidence I get a call from an FBI agent the SAME DAY???” one reviewer wrote, according to The Independent. “Seriously, what stunt are they trying to pull? Whoever developed this has to be deepstate setting us up… I came here to find love, not a damn warrant.”

Another reviewer, Bradenwh wrote, “I answered the question about January 6th honestly and the next day I have two police officers at my door telling me that they got a call alleging that I was involved in domestic terrorism??? This app was clearly created by Democrats as a way to subvert our constitutional rights as conservative Americans. Do not use this app unless you want to be harassed by left-wing fascists.”

A Right Stuff spokesperson told Gizmodo, “The claims that users were contacted by the FBI or that we forwarded information to law enforcement are completely false.”

Earlier marketing for the app featured transphobic undertones, including an ad featuring an “undesirable” bike-riding man voiced by a woman. The app’s website said, “Connect with people who aren’t offended by everything. View profiles without pronouns.”

A bully punched a gay teen in the face for hugging another boy. He just got sentenced.