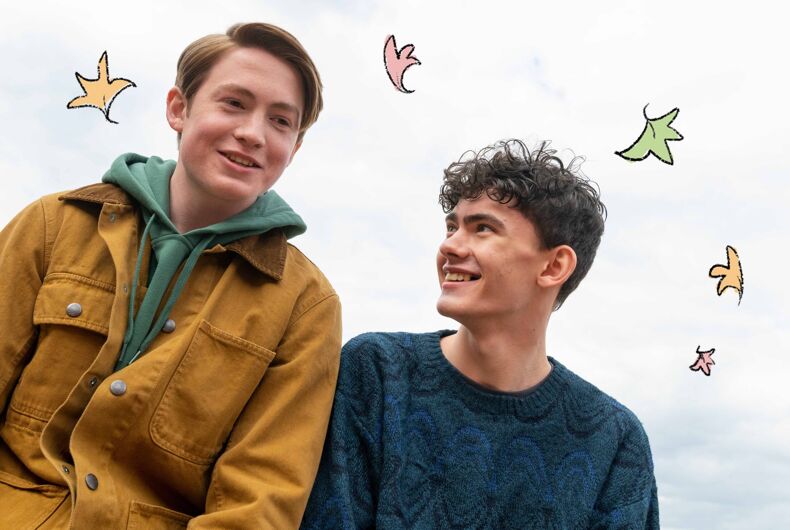 There’s no denying that LGBTQ representation in the media has increased by leaps and bounds over recent years.

In 2022 especially, we’ve seen some real queer magic on our screens which, for the most part, comes down to the actors who play those roles. A story is nothing without the person who tells it.

So, in celebration, we’re looking back on some of the best, most authentic queer castings of the year and why these performances were so impactful for audiences.

Heartstopper took the world by storm this year, breaking records with its hours viewed and being renewed already for two more seasons thanks to its life-changing impact on fans.

The coming-of-age series tells the story of Charlie Spring (Joe Locke), one of the only openly gay students at his all-boys grammar school. He develops a crush on rugby lad Nick Nelson (Kit Connor) and the two embark on the sweetest relationship – but they must keep it hidden as Nick is yet to come out. Full of both humor and emotion, Heartstopper is a genuine masterclass in young queer storytelling.

Nic Fearn shares why Heartstopper was his favorite LGBTQ show of the year.

“It was amazing to see a show that highlighted the challenges young people face when coming out to family, friends, and everyone else around them.”

He adds how “wonderful” Kit and Joe were at portraying Nick and Charlie, describing their romance as “highly believable” because of their powerful performances. Nic is also a fan of up-and-coming star Yasmin Finney, praising her talents following her role as Elle Argent, a trans teen who has moved to an all-girls school.

“I can’t wait to see where all the characters’ stories go in the next season,” says Fearn.

“When I was in school, I didn’t have the courage to come out as gay. I had already been bullied due to being autistic and I didn’t want to make myself even more different. I didn’t come out until I went to university and sometimes wish I did come out in high school. If I had watched Heartstopper when I was a teen, I’d have realized that coming out would be ok.”

A League of Their Own

Starring the likes of D’Arcy Carden and Abbi Jacobson, A League of Their Own has developed a solid fanbase over the past year. Seriously, it’s almost impossible to log into Twitter and not see at least one tweet about it.

The series follows the formation and journey of the WWII All-American professional women’s baseball league players as they travel across a rapidly changing US. It’s an adaptation of the 1992 film of the same name, but features new characters and storylines.

Inga Parkel shares her love for the characters in the show and explains how they made her feel “seen.”

“I love Abbi’s portrayal of Carson Shaw. I think it’s special how the character seems to mirror the actor’s actual lived LGBTQ experiences and I much prefer seeing queer actors in queer roles because it makes me feel seen and so happy that not only are these lived experiences something that are finally recognized on TV, but stories that the actors themselves felt connected to and honored to portray.”

She adds that Abbi’s own later-in-life coming out experience was “beautifully encapsulated” in her character’s storyline.

“I think the show struck a chord with me because it was the first role where Abbi really put her personal story of queer love for audiences to see and enjoy. It wouldn’t have worked as well with any other actor because her quirkiness and awkwardness are truly unique. And her happiness as Carson in finding her identity was heartwarming because, as a viewer who knows Abbi’s story, you know this was a really special performance for her.”

Set in an alternative version of 1969, For All Mankind shows the Soviet Union beat the United States to the moon, with the space race continuing on for decades with still grander challenges and goals.

This Emmy-winning Apple TV+ series has been widely praised by audiences for its thrilling sci-fi storytelling, with both action and humor.

Inga says her favorite character in the space drama is Ellen Waverly Wilson, who is played by Jodi Balfour.

“Jodi’s portrayal of Ellen in For All Mankind is so important to me. In the latest season, Ellen’s speech about queer existence and coming out as a public figure was powerful and special. It made me feel emotional and tear up because of the queerphobia her character faced during the time period. It was scary to know that, while most developed nations have laws protecting against anti-LGBTQ discrimination, there are still people and groups fighting against that.”

She adds that knowing the actor playing the role is also LGBTQ made it feel “so much more genuine.”

“There’s no way she could’ve been replaced by any other actor. I truly felt the authenticity behind her words.”

2022 brought us season 2 of Gentleman Jack, a drama set in 1832 in West Yorkshire, England, at the time of Anne Lister (Suranne Jones). Lister has become known as the first modern lesbian. Landowner Anne is determined to find herself a wife and settle down at her ancestral home, Shibden Hall, something she aims to do with Ann Walker (Sophie Rundle), whom she married in Britain’s first known lesbian wedding.

The entire show is based on Lister’s diary entries; she often wrote in code to disguise her relations with other women. Lister and Walker’s bravery has inspired countless lesbians and queer people in today’s society to remain true to themselves in spite of society’s rigid expectations.

Janine C Sheehan currently heads a campaign, Save Gentleman Jack, that calls for the show’s renewal after it was axed by HBO despite a loving fanbase.

She explains how the actors truly “embody” their characters physically and emotionally and how no other stars could’ve taken on the challenge because the weight of the story required each performance to be “sublime.”

“Suranne embodies Anne Lister. She nails the physical presentation, the way she takes up space in a room, her manner of speaking, the way she walks and sits, the way she shuts the door with her foot, the way she holds her wife when she kisses her. This all speaks to the hours she spent studying Anne, ensuring she understood how this woman lived her life, how she was perceived by others, and how that affected her. She made sure to establish a representation that would ring true to the legion of lesbians clamoring for this content.”

Sheehan adds that, while Rundle’s role is “equally challenging,” since Walker is typically portrayed as more shy and anxious in stark contrast to her wife, the star brings a “great understanding” to her character.

“These actors have a chemistry that electrifies through the screen. It’s easy to conflate actors with roles when they are portrayed so convincingly. Could anyone else have done it? Who cares!”

What critics are saying about Taylor Swift’s new album “Midnights”