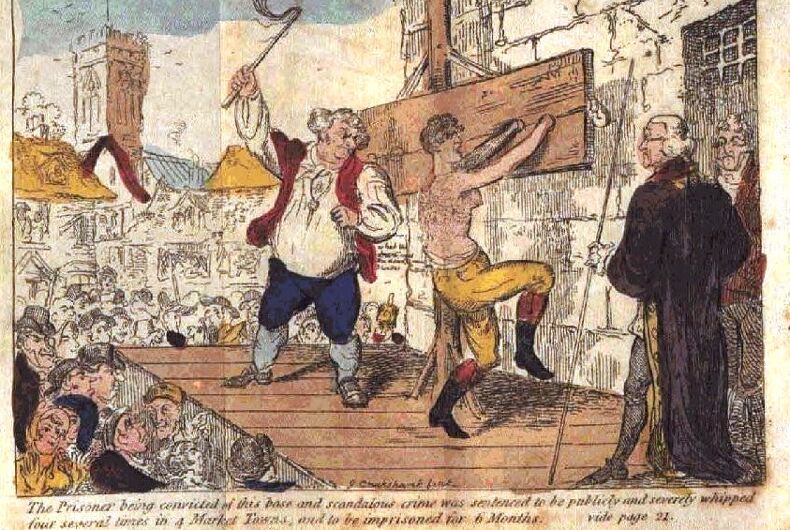 Image from a copy in Bristol Library of the pamphlet "The Female Husband" (1813 edition) by Henry Fielding. Cartoon is attributed to George Cruikshank. Text on the image says: "The Prisoner being convicted of this base and scandalous crime was sentenced to be publically and severely whipped four several times in 4 Market Towns, and to be imprisoned for 6 Months."Photo: British Newspaper Archive

Charles Hamilton, a traveling doctor in 18th-century Somerset, U.K., was a dapper, charming suitor who could have his pick of the ladies – and according to some accounts, often did.

But it was love at first sight when the doctor laid eyes upon his landlady’s niece, the beautiful but naive Mary Price.

On July 16, 1746, at St. Cuthbert’s Church in Wells, Somerset, Charles (or, as the parish register has it, James) Hamilton and Mary Price were married by the Reverend Mr. Kingstone.

For two months, the couple traveled through Somerset as husband and wife selling quack remedies – unproven cure-alls that often had little medical value. Still, on September 13, in a nearby town called Glastonbury, Mary denounced her husband to the town authorities.

It turned out that Charles was missing a vital piece of equipment for Mary’s long-term happiness – a penis.

But who was Charles Hamilton?

The person first known to the world as Mary Hamilton was born in Somerset, a rural farming county in southwest England, in about 1725, the daughter of William and Mary Hamilton.

When still a child, her family moved to Angus in Scotland until, at about 14, Mary put on her brother’s clothes and set out on the road back to England alone. From this moment, Mary lived as a man, going by the names of James, George, and Charles Hamilton in the years that followed.

In Northumberland, as Charles Hamilton, he entered the service of Dr. Edward Green, a mountebank, or seller of quack medicines. He then worked for Dr. Finly Green before setting up independently as an unqualified doctor.

In May 1746, he arrived at Wells in Somerset and lodged in the house of Mary Creed, meeting her niece and falling helplessly in love. This fateful act led to the marriage that would cast him into infamy.

A deposition from Mary Price says that she and Hamilton traveled selling medicines after marriage.

During their time together, Hamilton “entered her body several times” and “so well did the imposter assume the character of man, that she still believed she had married a fellow-creature of the right and proper sex.”

But after gossiping with her neighbors, Mary soon began to suspect her husband was harboring a secret. She confronted her husband when they were in Glastonbury – a town just a few miles away from their home in Wells. Hamilton admitted the truth to Price, who, in turn, instantly ratted him out.

The story was unusual enough at the time to attract the attention of the local newspaper, the Bath Journal.

According to those reports, after news of the arrest, many people visited the prison to gawp at Hamilton, described as being “bold and impudent.”

It added that “it is publickly talk’d that she has deceived several of the Fair Sex by marrying them.”

Another report says that at the trial, the prosecuting attorney, Henry Gould – misspelled as Gold in the newspapers – claimed that Hamilton had been married fourteen times.

The scandalized magistrates struggled to agree what the crime was – or even if one had been committed.

Records show that it was not so much that Hamilton dressed and worked as a man that was a problem as much as the fact that he deceitfully contrived penetrative sex.

After much debate Charles Hamilton was labeled an “uncommon notorious cheat” and was charged under the vagrancy act of 1744; an act meant to prosecute lack of employment or deceitful attitudes.

During the trial, members of Hamilton’s community wrote a letter to the clerk asking for severe punishment. They demanded public humiliation to ensure that Hamilton would never be able to live as a man again.

The severity of Hamilton’s sentence, and the terms in which the court delivered it, reflected the outrage and perplexity the case had aroused: “and we, the Court,” they said, “do sentence her, or him, whichever he or she may be, to be imprisoned six months, and during that time to be whipped in the towns of Taunton, Glastonbury, Wells and Shepton Mallet.”

The newspaper recorded that the “bold and impudent” Hamilton remained at that time “very gay, with periwig, ruffles, and breeches,” still defying the world as the world closed in.

He continued to sell his remedies surrounded by fascinated crowds who flocked to see him.

At three-week intervals, until Christmas 1746, Hamilton was whipped publicly in four different towns. That might have been the end of the saga for Hamilton if it weren’t for the novelist Henry Fielding.

Now considered the founder of the English novel, Fielding hurriedly cashed in on the salacious scandal, claiming he had his information “from the mouth” of Hamilton himself.

However, he likely never met the person he satirized in his work and it was instead cobbled together from court reports and his own (filthy) imagination.

The obscure – and pornographic – pamphlet was published anonymously. Like a Georgian-era 50 Shades of Grey, it was badly written, salacious, and sold out almost immediately. Unlike 50 Shades of Grey, only four copies are known to exist today.

In his story, Fielding claims Mary Hamilton was born in 1721 on the Isle of Man, the daughter of a former army sergeant who had married a woman of property on the island.

In his version, she had been brought up in the strictest principles of virtue and religion but was seduced into “vile amours” by her friend Anne Johnson, an enthusiastic Methodist, and “transactions not fit to be mention’d passed between them.”

When Anne leaves him for a man, Hamilton seeks another female lover. He meets Mrs. Rushford, a wealthy 68-year-old widow who takes her to be a lad of about 18. He pretends to be a Methodist preacher and promptly marries the widow.

According to Fielding, he deceived his bride by means “which decency forbids me even to mention.” The bride eventually discovers Hamilton’s birth sex, and Hamilton is forced to flee. Hamilton uses various other aliases to marry other women but is repeatedly forced to run when the ruse is discovered.

Finally, posing as a doctor, he marries Mary Price.

Gendering Hamilton as a woman, Fielding also claims that “on the very evening she had suffered the first whipping, she offered the gaoler money, to procure her a young girl to satisfy her most monstrous and unnatural desires.”

Historian Louis Crompton describes Fielding’s account as “one part fact to ten parts fiction” – so what did happen to Charles Hamilton once the storm had passed?

In July 1752, an unsigned letter appeared in the Pennsylvania Gazette, sent from Chester, just outside Philadelphia. It recounted the story of Charles Hamilton, an itinerant doctor living as a man, who was discovered to be biologically female.

According to the letter, Hamilton said he had been brought up in the business of a doctor and surgeon in the U.K.

He said he had set sail for Philadelphia in Autumn 1751, cast away from North Carolina, and made his way towards the city, selling medicine and treating people along the way.

Hamilton confessed he had used the “disguise” for many years.

So perhaps, Hamilton headed off to the New World and continued to live his life as he always had – true to himself and unashamed.

Laura Linham is a freelance journalist based in Somerset, U.K. You can find her on Twitter, @midsomlaura