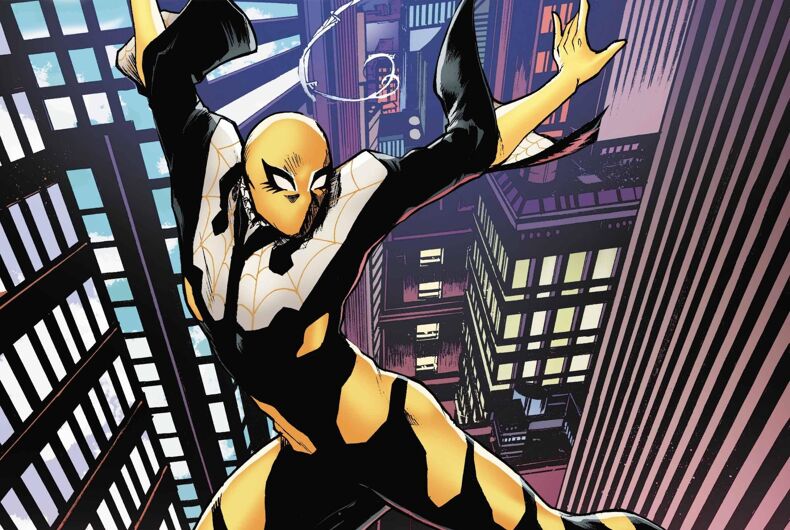 Marvel’s first gay Spider-Man arrives in issue #5 of the comic book publisher’s Edge of Spider-Verse miniseries, out tomorrow. Ahead of the character’s official debut, a preview of the issue hit the internet, revealing Web-Weaver flirting with a fellow superhero.

The single page from the series’ final issue shows the openly queer hero exchanging flirtatious banter with an alternate universe version of a vigilante hero known as Silk, who Web-Weaver describes as “frustratingly hot.”

MORE SILK!!! Sorta. This is from the preview for Edge of Spider-verse 5 coming out next week. It'll be interesting to see how it plays out. pic.twitter.com/8ZU6ME4dXz

Out comic writer and the co-creator of Web-Weaver Steve Foxe tweeted a couple panels from the same page earlier this week, explaining that the version of Silk in Edge of Spider-Verse #5 is not, in fact, a gender-flipped version of the character fans know from the main Marvel Comics universe, as fans have apparently been speculating.

“Cooper Coen, the winsome Web-Weaver, is a brand-new character. His world is full of familiar faces—heroic, villainous, mutant, and more!—in *very* different contexts,” Foxe tweeted. “But no ‘gender-flipped’ love interests.”

Cooper Coen, the winsome Web-Weaver, is a brand-new character. His world is full of familiar faces—heroic, villainous, mutant, and more!—in *very* different contexts.

But no “gender-flipped” love interests ;)

According to Marvel’s official description of Web-Weaver, the character is a “not-so-mild mannered fashion designer” whose spider-powers allow him to show us “a very different kind of Spider-Slayer.”

In a recent edition of his newsletter, Foxe teased a bit more about the character. “Web-Weaver is not Peter Parker—he’s a brand-new hero in the classic Spider-hero archetype. And I promise you don’t need a degree in fashion to follow his exploits. His job at Van Dyne is akin to Pete’s at the Bugle. This is very much an action story (with some flirting), which is really my favorite kind!”

He also noted how important sales of the issue would be to the character’s future. “How this issue sells will help determine if we get to tell more Web-Weaver stories in the future, and trust us—we have plenty to tell!” Foxe wrote.

Foxe first announced the character back in July, describing the Web-Weaver as “fearlessly femme.”

“Something I realized immediately when conceiving Web-Weaver is that he can’t–and shouldn’t–represent ALL gay men. No single character can,” the Eisner award-nominated Foxe wrote in a tweet at the time. “His fearlessly femme identity is central to who he is, but it’s not the STORY…which you can experience for yourself in September!”

Ahhh Kris's full Web-Weaver design is now out in the world!

Can't believe I got to have a hand in a character he designed. So blown away by the final result–and so excited for everyone to get to meet him! https://t.co/iiq7Pu8Uo0

Comic artist Kris Anka designed the character’s look and described some of his high fashion influences in a July tweet. “I looked at a lot of McQueen and Mugler for this as inspiration,” he wrote. “I cast a wide net for the original designs while also looking at new and unique spiders that @steve_foxe has recommended, which eventually paired down to this look.”

from the jump, I looked at a lot of McQueen and Mugler for this as inspiration. I cast a wide net for the original designs while also looking at new and unique spiders that @steve_foxe has recommended, which eventually paired down to this look

Foxe also noted in a September 1 tweet that Web-Weaver is Marvel’s first canonically gay male Spider-hero. “Ultimate Spider-Woman is queer and predates Web-Weaver by about a decade,” he wrote. “IMO the key is telling good stories with a range of characters, not just notching “firsts.’”

And to sites covering Web-Weaver–to the *best of our knowledge*, he is the first canon gay male Spider-hero.

Ultimate Spider-Woman is queer and predates Web-Weaver by about a decade.

IMO the key is telling good stories with a range of characters, not just notching "firsts" ;)