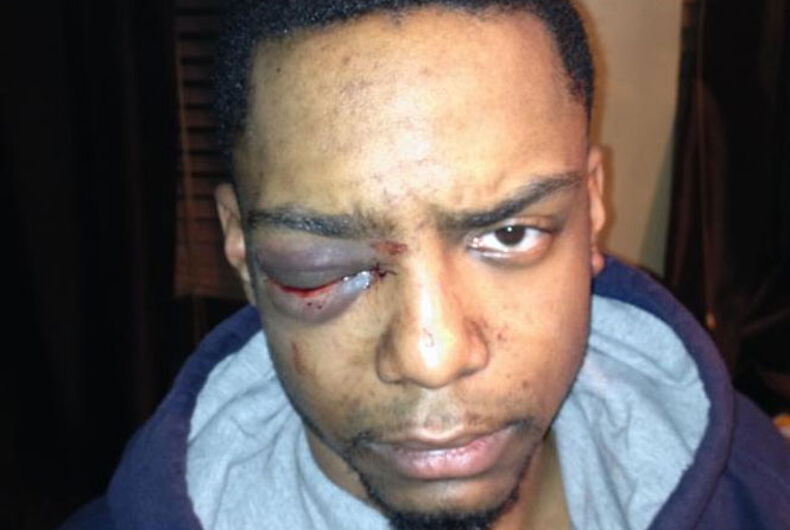 Taj Patterson, in a photo taken shortly after the December 2013 attack. Photo: AP

Almost a decade after a Black gay man was beaten so severely that he lost sight in one eye, a judge has awarded him $4.5 million for the pain and suffering caused.

“It’s been nine years,” the victim, Taj Patterson, told The New York Daily News. “A lot of back and forth. A lot of legal scenarios I didn’t understand. It was a long process.”

In 2013, Patterson was walking in Williamsburg, Brooklyn, when he was attacked by a dozen men who were part of an Orthodox Jewish neighborhood watch group.

The men accused Patterson of vandalizing cars, even though they had not filed a police report and police found the claim of vandalism to be unfounded.

The men beat Patterson while saying, “Stay down, fa***t, stay the fuck down.” He was left blind in one eye.

As Patterson told it to McClatchy News, the neighborhood watch group had received reports that a Black person had been vandalizing cars, and “I guess they took it upon themselves to apprehend the first Black person they saw.”

“I was a 22-year-old kid going out for a friend’s birthday,” Patterson said. “I didn’t think my life would change so drastically so quickly.”

Several months later, five men were indicted. Charges were dismissed against two of them, and two of them pleaded guilty and got community service. One of their cases, that of Mayer Herskovic, went to trial in 2017, but the case fell apart when several eyewitnesses recanted their testimony.

The judge did end up convicting Herskovic, but the appeals court ultimately threw it out.

Patterson then filed a lawsuit against the NYPD and the city of New York for allegedly giving his attackers preferential treatment.

“There is no numerical value you can place on someone’s eyesight or their limbs or their body in general,” Patterson said, adding that he “was violated in a very major way.”

“With that said, I’m glad that it’s all over after almost a decade.”