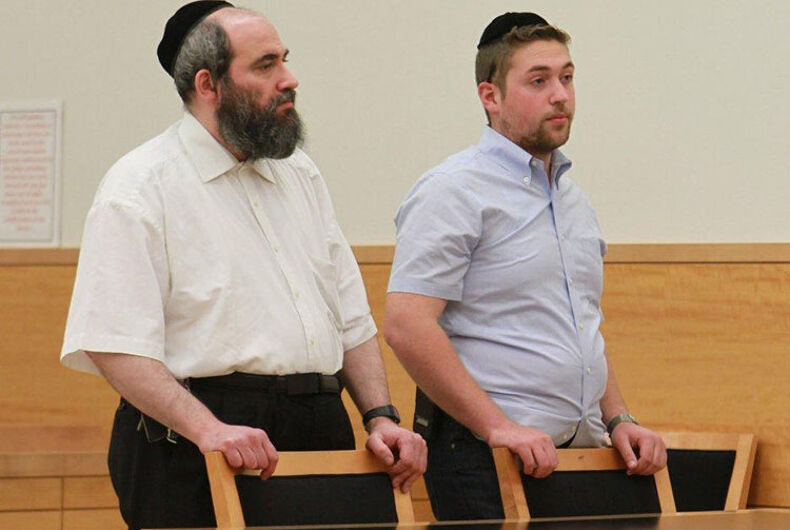 A judge in Brooklyn, N.Y. sentenced two Hasidic Jewish men to 150 hours of community service on Tuesday, for their role in the vicious beating of a gay black man in December 2013. They will not spend even one minute behind bars.

Pinchas Braver and Abraham Winkler were the only members of the Ultra-Orthodox Williamsburg Safety Patrol Unit to admit to taking part in the gang attack on Taj Patterson, a fashion student at the New York City College of Technology. Patterson told police more than a dozen men from the local civilian watch group in the heavily Orthodox section of Williamsburg  stopped him while he was walking home.

They claimed to be investigating reports of vandalism to cars in the neighborhood, which has long been a hotspot of tension between blacks and Jews. No one had notified police about such crimes, however. And even after the reports of vandalism proved to be unfounded, the group surrounded Patterson, then held him down and punched and kicked him, according to prosecutors.

Patterson said he was told to “stay down, faggot, stay the fuck down” during the beating.

When prosecutors brought charges of assault, their airtight case sprung a leak when their two key witnesses recanted their testimony, reported NewNowNext.

Patterson’s lawyer claimed the witnesses changed their stories under pressure from members of the neighborhood’s Hasidic community.

“The Shomrim claim they are committed to justice, yet they shut down witnesses with an efficiency the Mafia would envy,” Andrew Stoll said at the time. “They banish and shun any member of their community who dares to come forward.”

Although the prosecutor’s case crumbled, Braver and Winkler pleaded guilty and were sentenced to community service and paying Patterson restitution. A third man, Mayer Herskovic, starts trial next week. Two others had their cases dropped.

The only requirement for the community service is that it be served out at an organization that is “culturally diverse.”

Justice Danny Chun is giving the men 30 days to find a suitable organization or let the Department of Probation place them in a program, reported the New York Daily News. The judge also gave them an extension to pay the $1,400 restitution.