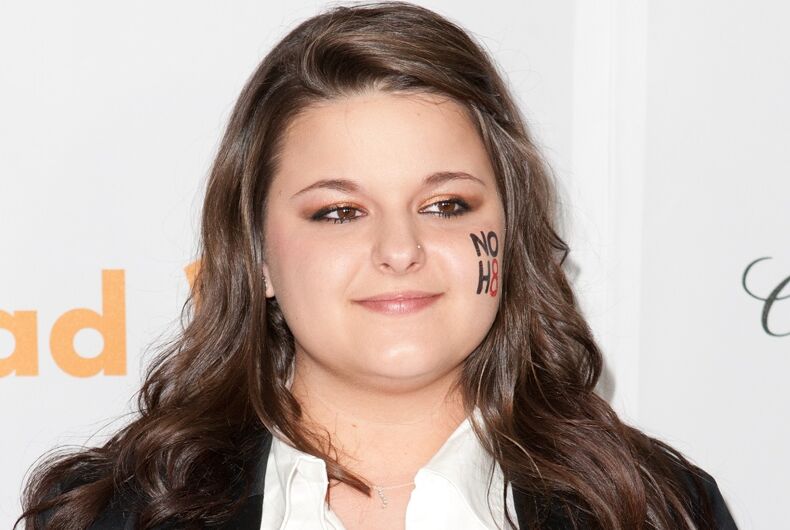 "The Prom" was based loosely on events from the life of Constance McMillenPhoto: Shutterstock

In a story that could be the source for its own Broadway musical, a high school in the small town of Cedar Grove, New Jersey beat the odds and will mount the Broadway show The Prom for its big spring show.

The story has earnest high school kids, prevaricating school administrators, townsfolk up in arms, and, finally, a happy ending.

“We were all set for this year’s spring musical to be ‘The Prom,'” she continued, with a description of the Tony-nominated show from 2018 about a group of has-been Broadway stars who travel to Indiana to help a high school student barred from taking her girlfriend to prom. Ryan Murphy turned the story into a movie starring Meryl Streep and Nicole Kidman in 2020.

“After seeing it a few years ago and learning that it was now available for schools to produce, the students themselves chose this musical,” wrote Altschul, who was a drama-rama herself at Cedar Grove and is now a high school guidance counselor in New York City, in addition to advising her alma mater’s drama department. 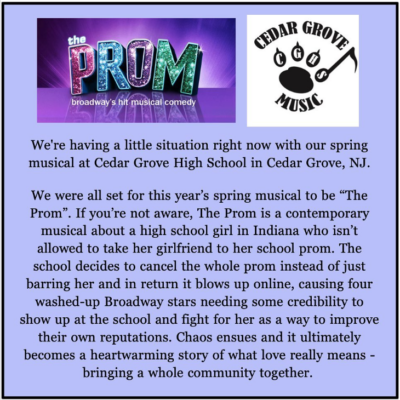 The show was inspired by the true story of Constance McMillen, a high school senior in Fulton, Mississippi who was banned from bringing her girlfriend to senior prom in 2011. She sued her school district for violating her First Amendment Rights and won.

“We would actually be the New Jersey high school premiere!” exclaimed Altschul about securing the rights, “but have now hit a bump in our normal road. We have just been informed that the administration would not like us to move forward with this show due to ‘community concern’ over the themes.”

Those concerns included the lesbian characters.

Cedar Grove was engulfed in controversy last year when the school board distributed a student survey that included a question asking respondents for their gender identity. Conservative members now say that school board president Christine Dye was solely responsible for the survey, while Dye told LGBTQ Nation that the entire board approved of the survey.

A judge ruled the survey violated the law because it was administered without parental consent. Two board members resigned in protest and a third lost their bid for reelection in the aftermath of the conservative-led push against the members’ so-called gender-equity “agenda”.

“The students, who feel this show is a representation of themselves and were so excited to have a chance to work on it, are now obviously a mix of devastated and angry at the news and immediately asked ‘what can we do?’ Altschul said in her post. They prepared to show up at the school board’s next meeting, scheduled for Tuesday, to protest.

Then came the third act twist.

After a backlash over the censorship from Cedar Grove students, parents and alumni, and the LGBTQ community, a new “family-friendly” version of The Prom was offered up by the musical’s publishers, common for high school productions but not previously available for The Prom.

It was a deus ex machina right out of Aristotle, and it came just in time to save the day for the kids and save face for school officials.

“After further inquiry with the licensing organization, we were informed that a High School Edition of ‘The Prom’ just became available,” said Cedar Grove Superintendent Anthony Grosso in an email to parents. “Therefore, Cedar Grove Public Schools fully supports producing the High School Edition of the musical The Prom, which was not previously available at the time of licensing.”

In the Tony Award-worthy turnaround, Grasso added that the “Jr. version” of The Prom will enable the school “to continue to produce the show at a level that allows our students to express their creativity through the art of performance.”

In a Tony Award-worthy turnaround, Grasso added that the revised version of The Prom will enable the school “to continue to produce the show at a level that allows our students to express their creativity through the art of performance.”

Editor’s note: An earlier version of this article said that Christine Dye was solely responsible for the survey without mentioning that that claim is disputed. We regret the error.