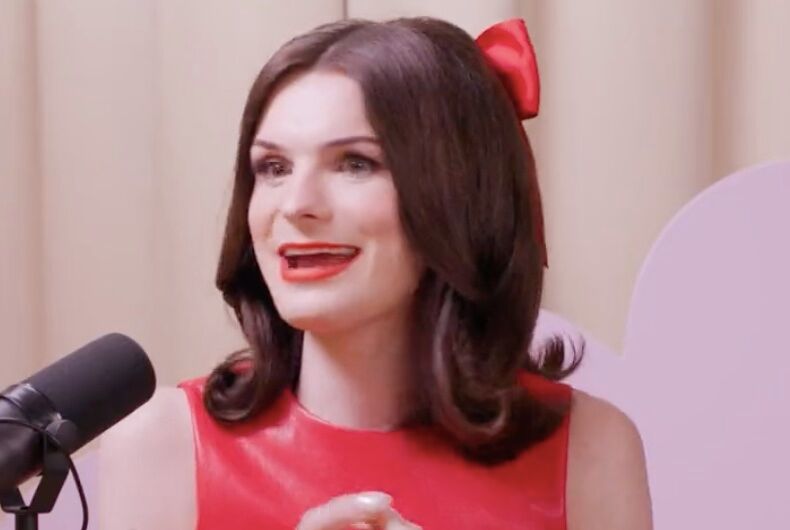 Transphobes are threatening a boycott of the beauty brand Ulta and accusing it of “womanface” after it published a 15-second video of a transgender woman discussing her ambitions.

In the video, trans TikTok influencer Dylan Mulvaney spoke with gender-fluid celebrity hairstylist David Lopez as part of ULTA’s new podcast series. During the discussion, Mulvaney said she grieved the life she thought she’d have before her transition. She then had to imagine a life different than the grim depictions of trans lives conveyed by conservatives and mainstream entertainment.

“Now I know I can find love, I know I can still be a performer, I know that I can have a family — I want to be a mom one day — and I absolutely can,” she said. “And that’s why the narrative still has a long way to go, because when I was grieving Boy Dylan, I didn’t know those things were even accessible to me.”

Trans 👏 Girls 👏 Can 👏 Do 👏It 👏 All! Tune into the latest episode of The Beauty Of… where host @DavidLopezzz sits down with guest Dylan Mulvaney to chat all things girlhood 💝 Watch now: https://t.co/tCRfEryYkZ pic.twitter.com/uaXJqEBQI9

However, after Ulta posted a video of the chat on Twitter, transphobic commenters accused Ulta of “erasing womanhood” and Mulvaney of doing “womanface.” Some included the hashtag #BoycottUlta in their tweets.

Blackface is racist. White people performing racist stereotypes of black or native peoples does nothing to challenge racism; it elevates it.

Womanface is sexist. Men performing sexist stereotypes of women from any culture does nothing to challenge sexism; it elevates it.

I really think more women need to wake up to this nonsense. I think too many of us have stayed quiet because we don’t want to hurt feelings and are too concerned with being polite. I’ve had enough. I’m not going to be quiet. #womanface is disrespectful. #boycottulta https://t.co/mWvnhcITld

Silencing and erasing women is a weird flex from a company built because of women.

To be clear, “womanface” is not actually a thing. Transphobes are trying to compare being a trans woman to blackface and yellowface, when non-Black and non-Asian people literally paint their faces with the intention of offensively imitating people of different races.

Trans women are women. They aren’t imitating women. Opponents of trans equality say they are in order to further the transphobic narrative that trans people and their allies are “anti-woman.” But their accusation of “womanface” is offensive to people of color, women of all kinds, and their allies.

Anti-LGBTQ activists have also claimed that drag performances are a misogyist form of “womanface.” But cisgender and trans women perform in drag, and many drag performers use the art form to explore gender while mocking sexist social gender roles.

Despite the backlash, many Twitter users also praised Ulta for its inclusivity.

Thank you Ulta for not letting the title of a podcast (or gender) matter, as neither should, when discussing beauty products. Because who cares? If it makes ppl feel amazing, seen, & beautiful – that’s all we can hope for – for everyone.

Love this!!! Thank you for being so inclusive! pic.twitter.com/EKGE8kIUgc

The comment section is hilariously weird, like they gonna buy their beauty products from the closest gastation or convenience stores 🏪 anyway 🍻 pic.twitter.com/uplpmNmOEx

Elsewhere in her Ulta interview, Mulvaney said she first identified as genderfluid and nonbinary before embracing her trans identity. She said it has been challenging to know how to deal with weird looks from strangers and how to overcome her own internalized sense of what her transition should look like. She also thanked the supportive online community for helping her positively embrace her identity.

“I think what the beauty of femininity, specifically for you and me, has been finding it in adulthood, because we’re picking up the pieces that were left behind long time ago,” Mulvaney said.

“I never saw myself as beautiful before this gender identity sort of journey started because I didn’t think boys were allowed to be beautiful,” she continued. “And I was like trying to be handsome, and yet that was didn’t feel right either. And so it is really special to look in the mirror or like have my makeup done and be like, oh my gosh, this is what I’ve always wanted.”

“[Beauty] is the ever-changing potential to see myself in a light that makes me really happy,” she added. “We as queer people, we are the stewards of change of this new world because we are willing to live our life basically through diversity, and willing to love ourselves despite the world telling us we shouldn’t.”

At 7 hours long, ‘The Inheritance’ still doesn’t tell the full story of HIV/AIDS

High school musical saved: “The Prom” will go on after students were devastated