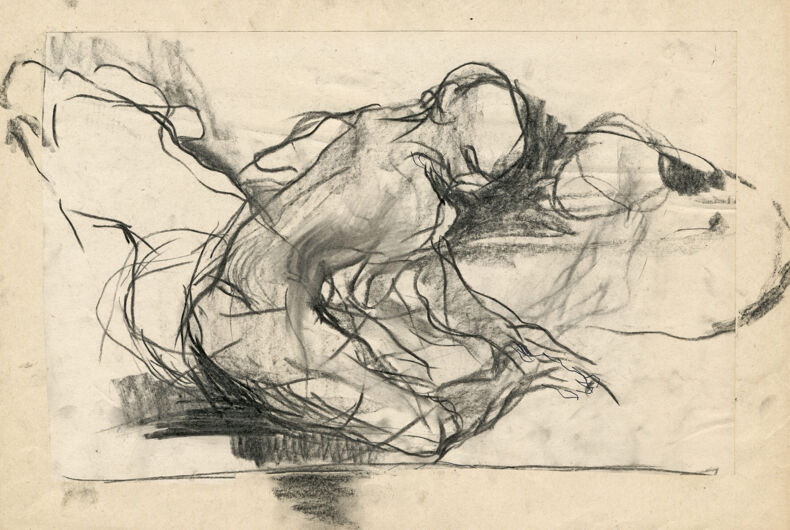 "Poets No. 4," an abstract expression inspired by John UpdikePhoto: Shutterstock

The Witches of Eastwick is probably my all-time favorite novel—but it’s an extremely problematic fave. It’s a John Updike novel, after all, and Updike was…not great when it came to depictions of women or queer people, or really anyone other than straight cis white men. He wrote a notoriously homophobic review of out author Andrew Hollinghurst’s novel The Spell, and The Witches of Eastwick was essentially written as a response to his feminist critics who objected to the portrayals of female characters as merely wives, mistresses, and generally as characters who exist only in relation to the male protagonists in much of his work.

His “very determined attempt to write about women who did have careers of a sort,” as he described the book in 1988, backfired, however. New York Times book critic Michiko Kakutani wrote that it read more like an attack on “liberated” women than an earnest portrayal. The Witches of Eastwick reads more like a satire of feminism than a feminist satire.

Despite its flaws, however, I always find myself revisiting it as Halloween approaches—the Season of the Witch, and all that. Despite Updike’s spite, his nastiness vis-à-vis his characters, I love this novel. The women in The Witches of Eastwick are more than flawed. They’re selfish, vindictive, catty, and certainly racist. And yet, I relate profoundly to their frustration, their dissatisfaction, and particularly the melancholy self-pity of Alexandra, arguably the novel’s main character—and the witch portrayed by Cher in the 1987 film. And Updike’s writing in Eastwick is some of the most sublime I’ve ever read.

I find my understanding of the book evolving every few years—how, for instance, would it read differently if it were written by a woman as a parody of cis-white feminism?

Recently, I’ve found myself reconsidering the novel’s queerness. Which is definitely the wrong way to characterize it. It is not a queer novel. But it does contain a surprising number of queer—or at least heteroflexible—characters. This may come as a surprise to people who are only familiar with the film adaptation.

Perhaps you recall the sight of Cher, Susan Sarandon, and Michelle Pfeiffer writhing on Darryl Van Horne’s bed, tastefully clad in satin and a respectable distance from one another. The film cuts away from that scene before the implied four-way takes place, but the witches in the book routinely fool around in Darryl’s hot tub. Jane (Sarandon in the film) is the first to get all aggressively handsy, but soon Alexandra is mooning over both Sukie (Pfeiffer) and Jenny Gabriel, a much younger, late addition to the coven omitted from the movie.

That Darryl, the bearish, sexually repulsive devil stand-in, doesn’t much figure into this fantasy makes sense in that Updike is less interested in his sexuality, his body. But there’s another reason the character—played so memorably by Jack Nicholson in the film—stands apart from the action. He’s queer.

In the book’s opening pages, when Jane describes the new unmarried man in town, Alexandra immediately assumes Darryl is gay. “Oh,” she says, “One of those.”

And she’s proved right. When Jenny and her gorgeous younger brother Chris enter the scene, Darryl increasingly leaves the women to their own devices in favor of the younger man’s company. Ultimately, he skips town, running off with Chris rather than pairing off with any of the women.

How to read this anticlimax is something I think I’m only just closing in on understanding, after years of reading and rereading this book. While his witches betray a voyeuristic view of female sexuality, I think the reveal of Darryl Van Horne as a homosexual speaks to Updike’s homophobia. Darryl is portrayed as something of a dazzling sham throughout the novel, a con man, a huckster of fake scientific breakthroughs, a lover of campy pop art. He scams Alexandra and Jane and Sukie into believing he’s a “real man,” and the revelation of his queerness is framed as a betrayal. This, then, is Updike’s sneering depiction of gay men, at least in this novel: a fraud, a flashy, flimsy, physically repulsive simulacrum of a straight man.

Toward the end of the novel, Alexandra is trying to make sense of the fact of Darryl’s sexuality, recalling how he did engage in sex with her and the other witches. “Some of them can,” Jane, the most venomous of the coven, tells her. “But it isn’t real to them. They don’t bring to it the illusions that normal men do.”

In this one line, Updike reveals both his homophobia (“normal men”) and, perhaps unwittingly, admitting his own shortcomings (his “illusions”) when it comes to depicting female sexuality.