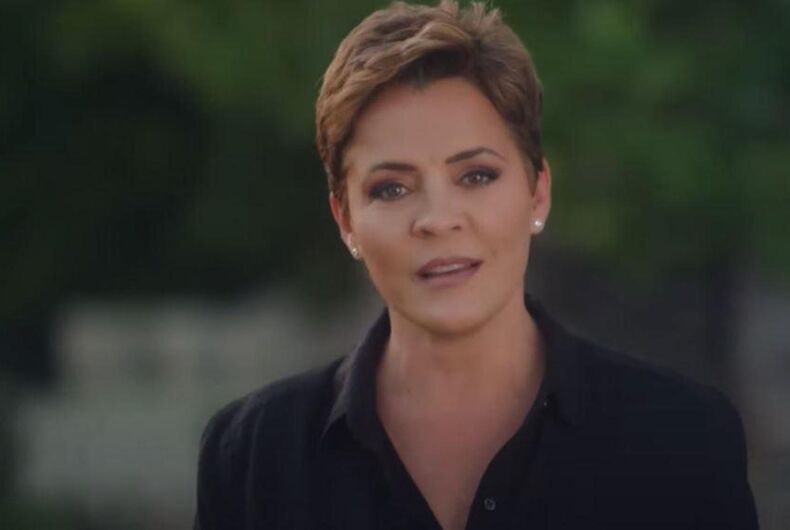 In the ad, Erickson is identified as a small business owner, although the ad doesn’t say what his business is. He complains about inflation, which he blames on Democratic candidate Katie Hobbs.

He also made up numbers about promiscuity: “The average homosexual has had in a lifetime over 500 sexual partners. Eighty percent admit that half of them are absolute total strangers. Thirty percent of those who commit homosexuality, 30 percent, have had over 1000 partners. Three hundred different people a year.” A 2013 survey found that the average number of sexual partners men who have sex with men had in the previous year was 2.3.

Erickson, of course, wasn’t all that concerned with LGBTQ people’s health because he went on to falsely imply that LGBTQ people are more likely to be child molesters: “One in twenty are child molesters, on the sex offender registry.” That statistic isn’t correct, according to Mother Jones.

He also accused LGBTQ people of being murderers.

“The LAPD has a statistic when they- when the officers come on to a crime scene and there is a murder and the murder itself has been an absolute bludgeoning, multiple stab wounds, multiple gunshot wounds, they immediately begin with the premise that this is a homosexual love quarrel,” he claimed.

In the years since that sermon, he doesn’t appear to have softened his antipathy toward LGBTQ people. In a 2019 Facebook post, he shared a message that purports it’s not possible to be a gay Christian.

His church’s website says that it’s God’s “biological design for marriage as only being between one man and one woman” and that they “affirm the headship of the husband and the submission of the wife as a living demonstration of Christ in His relationship to the church.”

It’s unclear why Lake would choose Erickson to appear in this ad; presumably, she could have found another small business owner who supports her campaign to complain about inflation and blame it on state government.

Lake made headlines earlier this year for her anti-LGBTQ statements about drag queens, who she claimed were being “welcomed” into schools.

“They kicked God out of schools and welcomed the Drag Queens,” she wrote on social media this past June. “They took down our Flag and replaced it with a rainbow. They seek to disarm Americans and militarize our Enemies. Let’s bring back the basics: God, Guns & Glory.”

Drag queen Richard Stevens – who goes by Barbra Seville on stage – wrote on Facebook that Lake took her kid to one of his drag shows. When Lake’s lawyer told Stevens to stop talking about Lake’s love of drag from before she was a Republican politician or else she might file a lawsuit, his lawyer wrote a hilariously fearless letter in response.

“To be clear: Mr. Stevens will not ‘cease and desist,’” the letter concluded. “If Ms. Lakes moves forward with filing a suit… I cannot imagine your client will be happy to revisit all the times she spent with Barbra Seville when I depose Ms. Lake.”

Lake’s campaign said that Stevens performed as a “Marilyn Monroe impersonator” at a party, which means that he wasn’t doing a drag show. She also said that drag is “sexualizing young children.”

“The event in question was a party at someone else’s house, and the performer was there as a Marilyn Monroe impersonator,” her campaign said in a statement. “It wasn’t a drag show, and the issue we’re talking about isn’t adults attending drag shows, either. The issue is activists sexualizing young children, and that’s got to stop.”

Lake is a 2020 election denier, falsely claiming that Donald Trump in fact won the election and President Joe Biden stole it with a massive, interstate conspiracy that left no evidence.

Who is out Rep. Ritchie Torres?