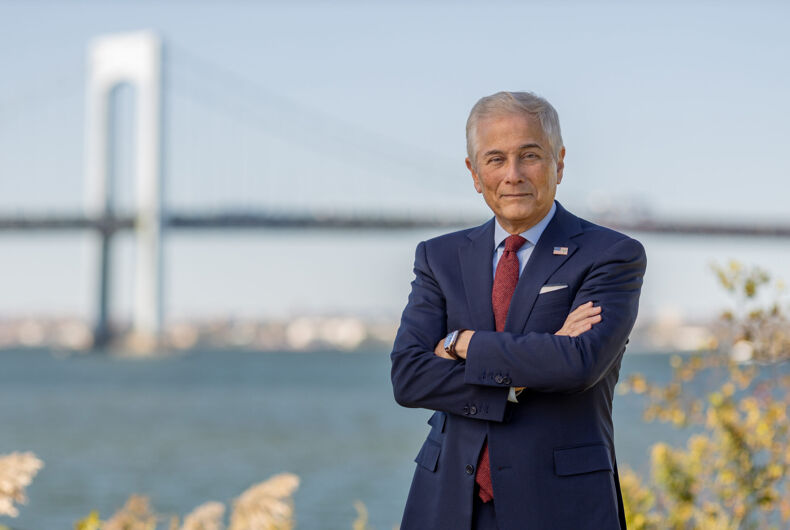 When asked to confirm his age, Out Democrat Robert Zimmerman replied with an easy and emphatic laugh: “No.”

For the record, the out Long Island Democrat – who is running for an open seat to represent New York’s 3rd Congressional District – is 68. It’s not a young age to hold elective office for the very first time, let alone to fight off an unrepentant MAGA opponent, who, at 34, is exactly half Zimmerman’s age.

He has served on Capitol Hill as a senior congressional aide and advisor to successive reps for his district, and also as the owner of a communications strategy firm he founded there in the late 1980s.

Zimmerman is also an elected member of the Democratic National Committee, a former president of the American Jewish Congress on Long Island, and a longtime media advocate for candidates and causes, appearing regularly on all the major cable news networks, and on broadcast venues like The View.

“I’m the only Democrat running for Congress in New York who has been nationally denounced by Donald Trump,” said Zimmerman proudly. In 2016, “He called me ‘a disgusting Hillary flunky.'”

This is a pivotal time in our nation's history. This election is a test between the mainstream values that define my life and the extremist values that define George Santos. I'll stand up for reproductive freedom, public safety, democracy, and building a stronger middle class. pic.twitter.com/DezplkZTxY

Devolder-Santos was at Donald Trump’s ellipse rally on January 6 and contributed to the insurrectionists’ defense fund. After losing in 2020 to NY3’s current rep by 13 points, Devolder-Santos claimed, to no effect, that the election was rigged.

The Republican is also gay, setting up the first race in U.S. congressional history to pit two out candidates against each other. In one way or another, the seat will be held in 2023 by a member of the LGBTQ community for the very first time.

“George Santos is gay,” said Zimmerman. “That’s where his commitment ends. He actually has publicly endorsed the Don’t Say Gay legislation that has been put forward in Florida and in 19 states. He actually uses words like ‘grooming’, and he chooses to embrace and stand with homophobes and bigots like Matt Gaetz and Marjorie Taylor Greene.”

.@Santos4Congress paid legal bills for the insurrectionists even after 5 brave police officers were killed and over a hundred were injured on Jan. 6th.

From supporting a national abortion ban to this new revelation, Santos is not only too extreme—he’s a danger to our democracy. pic.twitter.com/GLEvwvjnJQ

“Yes, I hope I have the privilege and honor of making that local history by being a first member of our community in Congress,” said Zimmerman.”The bigger point is making sure we have a member of Congress who’s going to stand up for our community. I’ll do that. George Santos repeatedly has shown quite the opposite, that he stands with the homophobic agenda.”

Like many in his generation, coming out was an evolving proposition for Zimmerman.

“I grew up in the suburbs of Long Island in the 70s. That was a very isolating time to be gay. Jeez, I’ve never really talked about it much before, but I used to hang out at the diner on Friday night. I didn’t want to tip my parents I didn’t have a date, or a date for the school dance, or something like that,” Zimmerman remembers with a quiet laugh. “Sounds minor to say that, but I remember those times.”

Zimmerman recounted being counseled by a trusted former teacher that conversion therapy was an option for young men like him.

“I knew I wasn’t going to do that, but that was a mindset in those days and, of course, was very isolating, because you felt very unseen. You felt you were very much unheard in the crowd, if you will.”

On this #NationalComingOutDay, I’m reflecting on my own journey. Please know that wherever you are on yours, you are loved and supported. I will always work for a world where everyone feels safe and lives proudly and openly. ❤️🧡💛💚💙💜 pic.twitter.com/nx93avqFT5

One place he learned to use it was on-air at the height of the cable news era. “My first segment was with Pat Buchanan, actually,” said Zimmerman, referring to the one-time CNN Crossfire host and the man who gave the term “culture war” its provenance at the 1992 Republican National Convention.

“He put his arm around me, and he looked at me and said, ‘Let me tell you how this works, kid. If you’re coherent and you show up on time, they’ll keep booking you.’ He wasn’t entirely wrong. And then we began this segment, and he blew me away,” recounted Zimmerman, laughing. “It was a rite of passage.”

And after being the voice for so many others, Zimmerman decided to advocate for his own candidacy.

Asked if his opponent is just a grandstanding MAGA provocateur, he shot back, “Let me tell you something. This is a toss-up district, ‘leaning’ Democrat. We do not have this nailed down. Not by a long shot. This is not a district that’s won. This is not a ‘safe seat.’ I don’t want anyone who’s reading this to think that someone this extreme can’t win. Extremists win all the time.”

“They’re relentless and you’ve got to be equally determined to fight back,” he continued. “Clarence Thomas said in his opinion on Dobbs [the decision overturning Roe v. Wade], that marriage equality is on the line. He isn’t kidding around, and he often speaks for the majority of that court. He’s saying what we all know is on their mind. He’s saying what’s on their agenda. Dammit, we have to make sure people wake up to understand it and take action to address it.”

.@Santos4Congress you publicly said that you would support a national ban on #abortion with no exceptions—even for New Yorkers. That is not a distraction. Women will die because of your position. #NY03 pic.twitter.com/pmE0uoUtzc

For Zimmerman, making it to Congress means “standing up a whole series of legislation to deal with homeless gay youth, the traumas our transgender young people are facing, making sure we finally outlaw, federally, conversion therapy. In the same way, passing the Women’s Health Protection Act and codifying Roe. This is legislative action we can take. We’ve got to be focused on doing it on many different fronts. And that includes state legislatures.”

Asked about the young people protesting Don’t Say Gay in Florida, Zimmerman replied thoughtfully to the contrast with his own time growing up, in the 1970’s.

“I love their openness. I love their passion. I love the fact that gay and straight kids are coming together,” said Zimmerman. “I’m just not going to let another generation of young, LGBTQ+ young people be put back in the closet. Not on my watch. I know what’s at stake, and the heartbreak that can lead to.”

It would be the honor of my life to serve as your representative in Congress.

I'll fight for tax cuts for families, funding for law enforcement, tougher gun laws, and ensuring that abortion is always safe and legal. You can count on me to deliver results for the people of #NY03. pic.twitter.com/SLoi8W725B

Lizzo compares monogamy to religion: “People fight for monogamy like they pray to it every day”