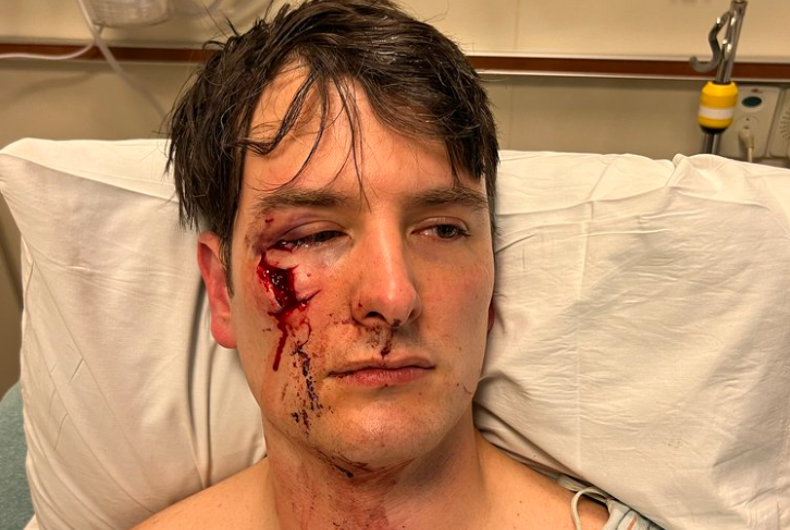 On a Friday night at the end of September, the two owners of a gay bar in Norwalk, Connecticut were brutally attacked by a man they say harassed patrons and hurled anti-LGBTQ slurs. After nearly three weeks of inaction by the Norwalk Police Department, and prompted by a graphic and public rebuke of the department’s missteps by the victims that earned widespread media attention, the suspect was finally arrested. Carmen Parisi faces charges including two counts of assault in the third degree. The judge set bail at $200,000.

Casey Fitzpatrick and Nicholas Ruiz, husbands and owners of the bar Troupe429 in downtown Norwalk, say the incident started after Parisi “repeatedly harassed and made several female patrons and our staff uncomfortable. While at the venue, he ordered one drink, that he did not finish, and was respectfully escorted outside.”

“The suspect repeatedly made disparaging statements about the bar and the people inside it, and used derogatory and anti-LGBTQ words,” according to the statement posted on the bar’s website a day before Parisi’s arrest.

“Then suddenly, the suspect became violent,” the post continued. “Nicholas tried to grab the suspect and was repeatedly punched in the right side of his face. His face around his eye and cheek was torn open, requiring a trip to the emergency room, and surgery of over 50 stitches.”

A graphic photo of a bloodied Ruiz in hospital accompanied the description. Fitzpatrick was punched in the throat.

The couple recounted how police arrived on the scene, handcuffed the suspect, and put him in a police vehicle.

“We are unclear how the Norwalk Police handled the suspect after this, but we know he was not arrested,” the post read. “He was not charged on September 23 for our assaults and was not taken into custody, and as far as we know, has faced no consequences.”

“As owners of Troupe429, we are thankful that our staff and patrons were unharmed. However, we are deeply broken. The psychological harm that this assault has caused is significant and we demand justice,” the post concluded. “There is no place for hateful violence in Connecticut.”

The same day the couple posted the public rebuke, Norwalk Police Lt. Terry Blake was maintaining the department was doing its job.

“Since the date of the incident, the department has been conducting all the necessary steps within the investigative process, including obtaining video evidence from inside the bar and attempting to get sworn statements from the two victims, who did not show up for their appointments,” Blake told Connecticut news outlet The Hour. “Despite the lack of statements, the warrant was submitted and is in the review process.”

After the couple went public, in quick order the warrant was issued, Parisi was arrested, and Fitzpatrick and Ruiz were finally interviewed by police. “Today was very productive,” Fitzpatrick posted in an update. The next day Parisi appeared in court and was formally charged.

Despite Lt. Blake’s assertion that “there was no mention of any racial, religious, ethnic, or sexual orientation language or indication of any anti-LGBTQ motivation behind the assault,” prosecutors submitted at Parisi’s hearing that he used anti-LGBTQ slurs in the attack, according to NBC affiliate WVIT.

“We are thankful that the Norwalk Police department was able to arrest and charge our assaulter,” Fitzpatrick and Ruiz told LGBTQ Nation. “We are overwhelmed with the amount of support and sharing of our horrific story to demand justice. We were always cooperative with law enforcement, never missed an appointment, and remain committed to assisting them however we can.”

“Hate and violence against our LGBTQIA+ Community must end.”

“Our hearts are heavy having lived this experience and knowing violent attacks in our community go unanswered. It was scary having to speak up and not knowing if reliving the trauma would bring justice. We know how important our voices are, and as we continue to recover from our physical and emotional wounds, we hope that justice will be served.”

The couple’s attorney Stephanie L. Stich added: “We have, and continue, to work closely with the Norwalk Police Department. My clients are encouraged that based on witness accounts, the original charges have been upgraded, and may be further upgraded as new evidence is gathered, as we believe this incident to be a hate crime.”