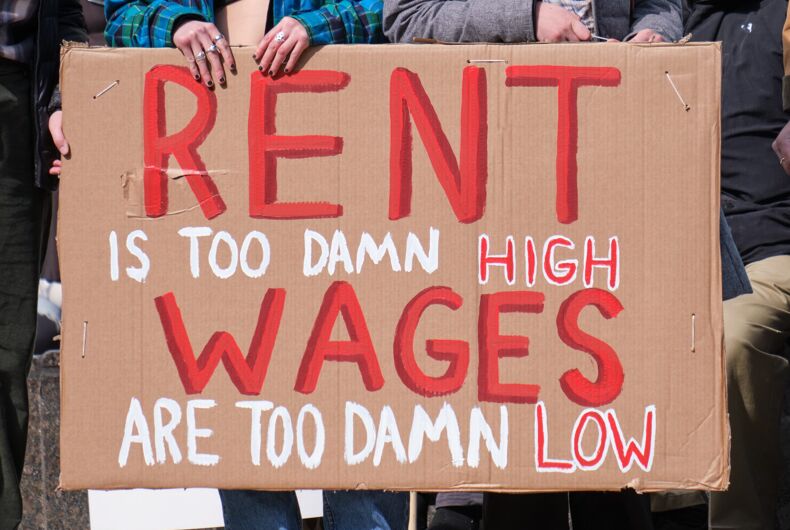 In three weeks, voters across the country will cast their ballots in congressional, mayoral, and local elections. For many candidates, housing issues form a crux of their campaign platforms, tapping into their constituents’ frustrations from lack of affordable housing and skyrocketing rents.

According to a 2020 report conducted by the U.S. Government Accountability Office, every $100 increase in median rent is associated with a 9% increase in the estimated homelessness rate. This situation disproportionately affects the LGBTQ community, in which 17% of queer adults have experienced lifetime homelessness, more than twice what was found in a general population study.

“In Los Angeles,  the biggest factor for people becoming homeless is the cost of rent,” said Hugo Soto-Martínez, an LA City Council candidate whose district includes the Eastside queer enclave of Silver Lake  “A full 60% of people who cite the reason for becoming homeless is because they can’t afford rent. So it’s a huge issue. Silverlake is traditionally one of the most gay-friendly neighborhoods in the city of Los Angeles. So that’s also pushing out a very vibrant community that has been there for many years.”

Hugo is one of the many local politicians that support rent control policies, which cap annual rent increases by a fixed percentage. LA County is protected by the Rent Stabilization Ordinance (RSO), which sets maximum rent increases based on the Consumer Price Index (CPI). The theory behind this policy is that limiting the rate of rent increases will keep housing affordable and reduce people from being priced out of their homes.

Unfortunately, rent control in Los Angeles currently suffers from legal loopholes. One is the Costa-Hawkings Rental Housing Act, a 1995 state law allowing landlords to reset rental rates on rent-controlled units once they have been vacated. It also prohibits RSO units in buildings built after 1978.

LA landlords can also circumvent rent control through the Ellis Act, which allows landlords to evict tenants from RSO units if they are planning to “go out of business.” The law claimed to protect small mom-and-pop building owners who want to retire, but in practice, it’s been used by corporate landlords to rebuild these properties as new buildings, which, thanks to Costa-Hawkings, are exempt from rent control.

“It takes RSO units off to the market,” said Hugo. “You see a lot of the fourplexes in the city. They’ll demolish them and rebuild, you know, 20-unit apartments. And so when they do that, there’s no requirement to replace the RSO [units] so they can make them affordable.”

Problems with housing affordability aren’t unique to Los Angeles. A similar problem is found in Washington DC, where mayor Muriel Bowser is running for a third term. Bowser has boasted of committing over $170 million towards affordable housing. But, a 2021 audit from the city’s Office of the Inspector General concluded that she failed to meet the legally mandated goal of directing at least 50 percent of DC’s annual Housing Production Trust Fund towards creating and preserving homes for the city’s lowest-income residents.

Like Los Angeles, DC benefits from rent control, which since 2006 has capped rent increases to CPI plus 2%. For residents over the age of 62, or those with disabilities, the increase excludes the additional 2%. For Joel Cohn, legislative director of the DC Office of the Tenant Advocate, the city’s rent control policies have proven effective.

“The success of the program is a qualified yes,” Cohn assured, “Say you’re an elderly tenant, and the rent increase only goes up by the CPI each year. You’re going to have a stabilized unit.”

Unfortunately, echoing Los Angeles’ problem with Costa-Hawkings, DC suffers from a vacancy increase. After a tenant moves out of a unit, a landlord can jack up its rent by 10% to 20%, depending on the length of time the tenant lived there.

“In some cases, where you have a unit in a university area, and there’s a lot of turnover in units in those areas, that can be problematic.” Cohn explained, “Because you’re essentially getting increased 10%, year after year. And that leads to a loss of affordability for that unit unless mom and dad are paying for it.”

To balance out these limitations in rent control, Los Angeles, Washington DC, and myriad other cities have adopted a “Swiss cheese” strategy to housing protections. Although rent protections, like slices of Swiss cheese, may have holes in them, if you line up enough of them, the holes get covered up.  A prominent housing strategy frequently layered with rent control’s goal of keeping people in their homes is rent relief. During COVID, many cities enacted temporary moratoriums on rent increases and evictions for non-payment, which were bolstered by the federal Rental Assistance Program that repaid outstanding back rent directly to landlords.

“If someone’s in crisis, and they’re about to be thrown out. I think that’s, that’s a good program to have,” said Hugo, who hopes to see aspects of this rental relief expanded in Los Angeles. “Moreover, it’s also more cost-effective and cheaper for the city to keep folks in their home rather than be thrown out.”

Measure ULA, which would create a one-time tax on properties that sell for over $5 million to support the expansion of rent relief, will be on the ballot in November. A portion of that money will go towards emergency rental assistance for seniors. But even rent relief has encountered difficulties.

“Emergency rental assistance was very, very slow,” admitted Hugo. “The process was very cumbersome. A lot of people did not receive their money. And it just took a very long time. I think the process could have been much better. But I think in its totality, all the things that were passed were effective in maintaining people in their homes.”

“We are resistant to government intervention. Unless, of course, you’re talking about my uterus,” quipped Israel.

Austin currently leads the nation in population growth, with a current population of over 2 million people, a 2.79% increase from 2021. But, the city’s housing has not kept pace with this influx of residents.

“People are moving here in droves. And by moving here, they are exacerbating the affordability crisis. Austin has been struggling with growth for decades now. It’s a city that has become content with ‘If we don’t build it, they won’t come.’ And it’s certainly true of our housing supply issues.”

As a former residential realtor, Israel has witnessed the consequences of this lack of affordable housing firsthand.

“I’m going to paint a canvas for you. I’ve had clients who were looking to rent, and it was just as simple as, let’s contact a realtor and see what’s available. Well, what was available was way out of their price range. They thought they made good money. And then, often, you can’t find a one-bedroom apartment for under, let’s say, $1,700 a month. They were not only dealing with very limited options, but they were also dealing with other renters who were willing to pay for an entire year’s lease in cash.”

In Austin, housing issues have become a primary concern for the city’s queer community.

“We have an LGBTQ quality of life committee, said Israel. “I called up the chair of that committee and said, ‘what are the top issues that you’ve been seeing?’ And in another time, and in another dimension of time and space, you would think that they would say we want an LGBTQ community center or police reform. Their number one issue was affordability. They want to be a part of our community, and our community is just becoming conditioned to push people out. That’s regardless of your skin tone or your sexuality, and I thought that was a very telling priority for the LGBTQ community in Austin.”

For Hugo, another important tactic for battling problems with affordable housing is knowledge.

“The number one way we’re gonna stop a lot of like the housing issues is by educating and having people self-organize,” Hugo posited, “For tenants and renters to understand their rights. That they have to be at the frontline of pushing back against these things. Because it’s hard to enforce. And so what the city could do is just have massive outreach and money dedicated to educating and training tenants.”

With elections looming, it is worth noting that an informed renter is usually an informed voter.