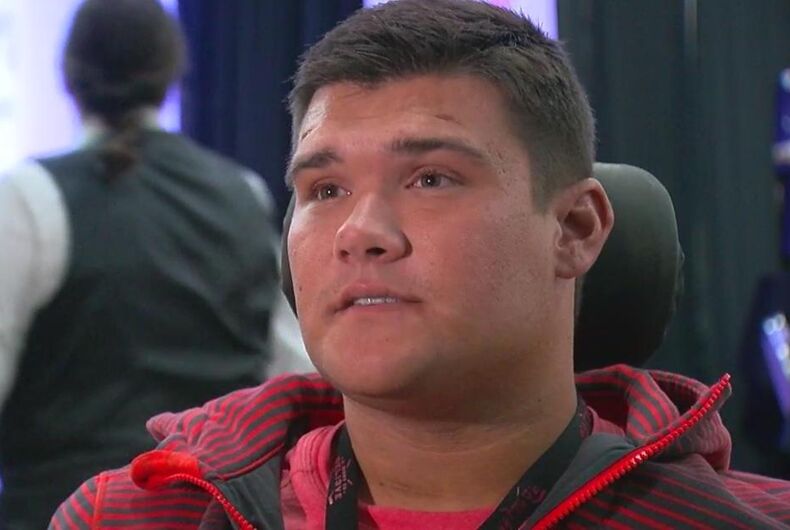 Jack Jablonski, a prominent figure in the western U.S. professional ice hockey community, became a wheelchair user after he was seriously injured at age 16 by a fellow hockey player in an accident during a high school tournament.

But in a recent interview, the 26-year-old shared one of his biggest life challenges: overcoming the depression, isolation, and suicidal ideation he experienced from being a closeted gay man.

Jablonski has become prominent in pro-hockey as the digital media content specialist of the Los Angeles Kings’ communications department — he wrote most of the content on their website. He has appeared on Kings’ telecasts, contributes to the “All the Kings Men” podcast, and helps coach the Junior Kings Under-15 team. He also runs a web series called “Talkin’ Jabs” has provided analysis for the American Hockey League’s Ontario Reign team.

But three months after he began working full-time in the Kings’ communication department, the COVID-19 pandemic shut down all activity in the National Hockey League, effectively sidelining Jablonski’s work for the next 16 months.

During that time, he fell into a deep depression.

“For the longest time, [I] didn’t want it to be true, because it’s not the norm in the world I live in,” Jablonski told The Athletic.

“There were many times I would go on these walks and think about going up to Pacific Coast Highway and driving my chair in front of a car and just stopping it all because of how lonely I felt and how sad I was,” Jablonski admitted.

As a teen, he had many athletic and masculine friends, but he didn’t know any gay people. He began feeling conflicted about his own gay feelings, especially since he saw himself as a regular guy uninterested in “gay” pop culture.

As the world of pro-sports has been slow in embracing out LGBTQ people, he neither felt ready to admit his homosexuality nor able to talk to anyone else about it.

He also worried that coming out might disrupt the work of the Jack Jablonski Foundation, his group which has raised over $3 million for spinal cord injury research.

“It was ugly. I was very by myself, lonely, didn’t know who to talk to, didn’t know how to go about it, comprehend it, understand it,” he said. “And it got worse and worse. And then I just finally one day was like, ‘F**k it. I need to tell someone.’”

For advice, he reached out to Luke Prokop, an out pro-hockey player. Jablonski shared that he too is gay and asked lots of questions about Prokop’s experience coming out in the sport. Prokop’s response was very encouraging as he shared tales about the support his team showed him.

His response gave Jablonski the strength to come out to his closest friend, Zack Hale.

In a supportive text message, Hale wrote, “you’ll always be my best friend, my brother and ill always love you! I really appreciate you telling me and I’m really sorry that this is something you’ve been dealing with on your own. I’m sure it’s been one hell of a battle to hold on to this, especially on top of everything else you’ve gone through.”

Hale then encouraged Jablonski to come out to his own family, reassuring him that his family loved him, and saying that, despite any initial discomfort, the admission would take the burden of closeted life off of his shoulders.

On August 10, 2021, Jablonski told his parents. He bawled as he spoke. They were both shocked and struck speechless by his revelation. Nevertheless, they embraced him.

“I can’t even fathom how hard that had to be for him and how bad I feel for not being there for him,” Jablonski’s mother Leslie told The Athletic. “I always thought it was just the paralysis, it’s COVID, everybody’s sad, but I had no idea what he was struggling with…. I sometimes just break down and cry when I think of what he’s been through just by himself.”

While the 26-year-old hockey figure now says he’d like to start dating and get his first boyfriend, he said, “For the first time in my life, I’m happy and excited about the future… It feels great to be able to be myself and not have to worry about hiding in the shadows.”

In a September 7 Twitter post, Jablonski wrote, “I am not a professional athlete, but I plan on spending my life and career in sports. Having seen the acceptance to the brave men and women that came before me, I can’t thank you enough for what you’ve done to pave the way in sports. You have helped people like myself become comfortable to be who we really are publicly. A gay man in the sports world.”

“I am still Jack,” he added, “the man on a mission to beat paralysis, striving to have a career in hockey and working to make the world a better place.”