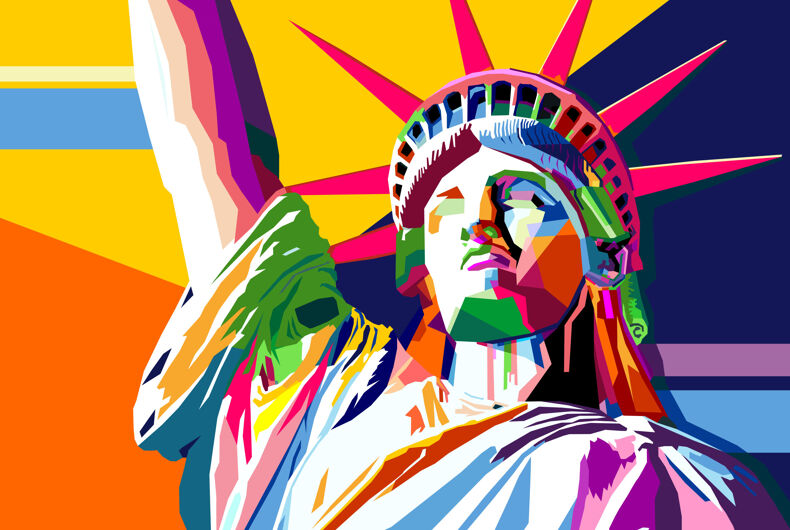 A tension has always existed regarding whether and how many new immigrants should enter our shores. One side can be represented by Emma Lazarus in her iconic poem “The New Colossus” engraved on the beacon of hope, the Statue of Liberty, in New York harbor.

Not like the brazen giant of Greek fame,
With conquering limbs astride from land to land;
Here at our sea-washed, sunset gates shall stand
A mighty woman with a torch, whose flame
Is the imprisoned lightning, and her name
Mother of Exiles. From her beacon-hand
Glows world-wide welcome; her mild eyes command
The air-bridged harbor that twin cities frame.
“Keep, ancient lands, your storied pomp!” cries she
With silent lips. “Give me your tired, your poor,
Your huddled masses yearning to breathe free,
The wretched refuse of your teeming shore.
Send these, the homeless, tempest-tost to me,
I lift my lamp beside the golden door!”

From “the golden door,” the extreme other side of the debate can be represented by Thomas Bailey Aldrich’s “Unguarded Gates” which warned of the open gates unguarded by the “white Goddess!”

…Wide open and unguarded stand our gates,
And through them presses a wild motley throng—
Men from the Volga and the Tartar steppes,
Featureless figures of the Hoang-Ho,
Malayan, Scythian, Teuton, Kelt, and Slav,
Flying the Old World’s poverty and scorn;
These bringing with them unknown gods and rites,—
Those, tiger passions, here to stretch their claws.
In street and alley what strange tongues are loud,
Accents of menace alien to our air,
Voices that once the Tower of Babel knew!

O Liberty, white Goddess! is it well
To leave the gates unguarded?

Many of us living in the great state of Massachusetts recently welcomed the newly arrived hopeful immigrants who escaped tyranny, poverty, and violence in their home country of Venezuela. They arrived on Martha’s Vineyard, an island off Cape Cod, as kidnapped victims transported there by Florida Gov. Ron DeSantis (R), aided and abetted by Texas Gov. Greg Abbott (R) and Arizona Gov. Doug Ducey (R).

These MAGA Republican governors are using the refugees as pawns on their political chessboard to advance their political prospects by lowering themselves to the baseness of their constituent base. Racism was the motivating factor. These immigrants desired to come through the gates but were, instead, seen as Aldrich saw them – “a wild motley throng…[with] accents of menace alien to our air.”

While a young 18-year-old white man pulled the trigger at a Buffalo, New York grocery store, shooting 13 and killing ten, most of whom were black, the perennial system of patriarchal Christian white supremacy provided the guns and bullets.

We must not, therefore, dismiss the recent mass racist shootings and rallies in the United States merely as acts by some deranged or mentally ill individuals acting out their sickness. Rather, we must understand these incidents as individuals acting out our country’s longstanding sickness of racism and ethnocentrism in a growing normalization of domestic terrorism of political violence.

The actions and policies of powerful political leaders like DeSantis, Abbott, and Ducey send strong and clear messages of virtual consent for extremists to take up arms against what they consider as the continually rising tide of invasion coming from our southern border.

But if we as a country had heeded the warnings of the anti-racism leaders and grassroots activists from the very beginning, we might have been spared the tragic and brutal legacy of racism – this original and perennial sin – that has infected our nation. We might now find ourselves further, much further, along our path toward establishing a more perfect union, one in which We The People unite in equality and cooperation.

But the underlying toxin of patriarchal Christian white supremacy pours over us all like acid rain, preventing us from reaching our mandate in this experiment we call “democracy.” Until we listen to the voices and hear the experiences of people most affected by racism, we will never fulfill the promise of the Preamble to our Constitutions:

“We the People of the United States, in Order to form a more perfect Union, establish Justice, insure domestic Tranquility, provide for the common defense, promote the general Welfare, and secure the Blessings of Liberty to ourselves and our Posterity, do ordain and establish this Constitution for the United States of America.”

But conservative politicians continue their attempts to restrict honest and open age-appropriate discussion of our nation’s legacy of racism in our schools and throughout society.

As long as we continue to sweep our racist past under the proverbial rug, like dust mites, it perpetually grows and multiplies.

A rightwing blogger accused a Black drag queen of exposing herself. Now the queen is suing.