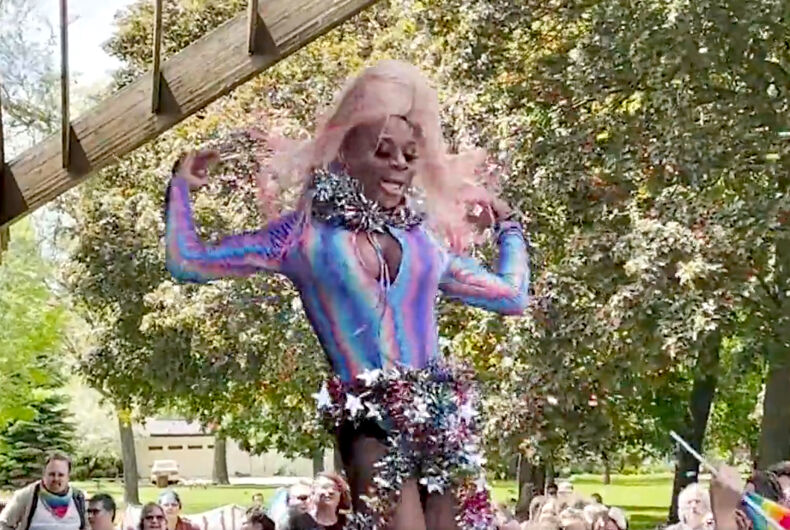 An Idaho drag performer is suing a right-wing blogger for defamation after the blogger falsely accused the queen of indecent exposure during a Pride event this summer.

On June 11, Eric Posey, who performs as Mona Liza Million, performed at Coeur d’Alene’s Pride in the Park event. Blogger Summer Bushnell later posted a doctored video of the performance on her website, blurring Posey’s groin “to make it appear as if he exposed himself,” according to a press release from Posey’s lawyers.

According to a July 1 report by NBC affiliate KHQ, the Kootenai County Sheriff’s Office and Coeur d’Alene police received multiple complaints about the video, none of which came from first-hand witnesses of Posey’s performance.

After reviewing the original, unblurred video, the City of Coeur d’Alene Prosecuting Attorney’s Office released a statement saying, “The allegations of indecent exposure, or other crimes cannot be supported by the evidence. Therefore, prosecution is declined.”

Very exciting drag performance by Mona Liza Million in Coeur d'Alene, #Idaho in front of some of the many children in attendance at "Pride In The Park."

There seems to be some issue over the dollar bills between the MC, the kids and this performer. "Get your money girl." pic.twitter.com/mS0h9m6Vjj

“After three months of silence, it is now my turn to speak,” Posey said in a press release. “Following Coeur d’Alene’s sixth annual and largest Pride in the Park on June 11th, an altered video of my performance was widely circulated online, along with false allegations of indecent exposure.”

“Despite being cleared of all wrongdoing, provocateurs have continued to spread the doctored video of my performance, not only defaming me, but also inciting a backlash towards the LGBTQIA+ community statewide.”

“I have no choice but to take legal action to hold those responsible for the lies accountable for their actions. My hope is that this civil suit puts a stop to the hateful disinformation campaigns being waged in Idaho.”

Coeur d’Alene’s Pride in the Park drew national attention this summer when police arrested 31 members of the white supremacist group Patriot Front on their way to disrupt the event. As The Advocate reports, Posey’s defamation suit asserts that Bushnell sought to capitalize on that attention.

“Bushnell’s false statements had their intended effect – thousands of people across the nation viewed her posts and many of them believe Posey committed a serious crime,” said Wendy J. Olson, an attorney for the law firm representing Posey. “Flyers with Bushnell’s doctored photo were posted throughout Coeur d’Alene and he has endured public harassment, hatred, contempt, and ridicule.”

“Bushnell lied to gain popularity on social media, but the publicity she received was not free; it came at the expense of Posey’s reputation and emotional wellbeing. Mr. Posey is eager to set the record straight.”

“I’ve grown to approach life mindful that the energy I reflect has an impact on every living being,” Posey said. “As such, I strive to radiate kindness, love, and patience in everything I do. Most importantly though, I seek to inspire all of us to live out our truth. I am eternally grateful to the Coeur d’Alene Police Department and City Prosecutors who worked tirelessly to uphold the truth, and am so appreciative of those in the North Idaho community who rallied behind me in support during this difficult time.”